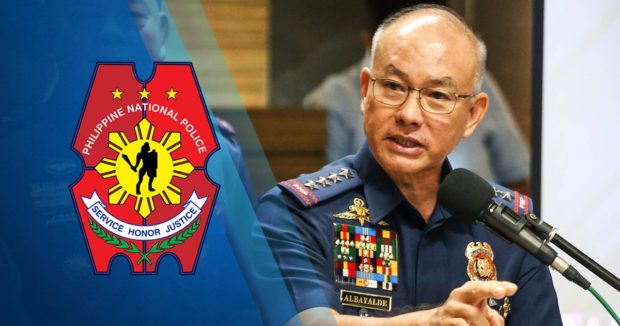 MANILA, Philippines — Philippine National Police (PNP) chief Director General Oscar Albayalde said on Monday that the relieved chief of Bacolod City police and four other police officers who were linked to illegal drugs would be given due process.

Albayalde’s assurance came after President Rodrigo Duterte earlier announced he was firing Senior Supt. Francisco Ebreo as chief of the Bacolod City police in Negros Occidental for allegedly enabling the proliferation of illegal drugs in the city.

According to Albayalde, the police officers were only removed from their posts pending investigation and that the President’s move does not equate to their dismissal from service.

He also said the PNP has no right to question the decision of the President, whom he stressed is also the commander-in-chief of the PNP.

Albayalde said Ebreo was not included in the drugs watchlist of the PNP.

Chief Supt. John Bulalacao, director of the PNP in Western Visayas, earlier said he was surprised by the announcement of Duterte on firing Ebreo.

Bulalacao said that all the while, he was trusting Ebreo with the campaign against illegal drugs and that he was in fact “delivering substantial accomplishments” as chief of Bacolod City Police.

Read Next
2  hurt in Zamboanga shooting incident despite gun ban
EDITORS' PICK
Metro Manila’s COVID-19 cases on downward trend, but surge not over — OCTA
House energy committee chair Arroyo bats for cheap electricity
Unleash the photographer in you this World Photography Day with vivo smartphones
Look Through: The fate of impounded stray dogs
Palace warns sugar hoarders after raid on Pampanga warehouse
What to watch out for when selecting a video surveillance solution
MOST READ
LOOK: Miel Pangilinan dazzles in glittery pre-debut shoot
DOJ indicts bank officer in $2.1 billion Wirecard fiasco
PNP bars US legislators’ visit to De Lima due to lack of authority from court
Palace warns sugar hoarders after raid on Pampanga warehouse
Don't miss out on the latest news and information.