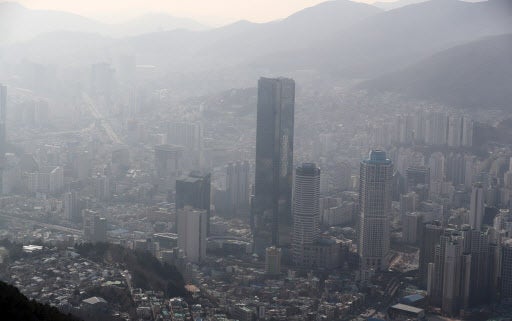 SEOUL — Most of South Korea suffered high levels of ultrafine particles Monday, prompting the Ministry of Environment and municipalities to enforce emergency measures to reduce the dust level for the second consecutive day.

The fine dust level was measured at 191 micrograms per cubic meter for Gyeonggi Province, followed by 174 for Sejong and Incheon and 160 in North Chungcheong Province on Monday afternoon.

When emergency measures go into effect, thermal power plants in the areas must reduce their output to 80 percent of normal operations. Old diesel cars 2.5 tons or larger and registered to the city of Seoul before 2005 were banned from driving in the city. Some 430 parking lots at state-run organizations were also shut down. Some 100 public emissions facilities were required to keep operational hours shorter. Half of public vehicles were prohibited from roads.

It marked the third time, following instances in January and March last year, for the emergency measures to come into force for two consecutive days.

The government on Sunday sent out emergency alert text messages to warn about the high dust levels expected throughout Monday and to ask pedestrians to wear masks and refrain from outdoor activities.

The level of fine dust began to increase Friday. Over the weekend, the fine dust level hovered around 89 to 107 micrograms, and the ultrafine dust level remained between 63 and 73 in central Seoul, forcing people indoors.

Questions continue to linger over the effectiveness of the government’s emergency measures. A large portion of fine dust is thought to originate from industrial areas in China, but how much that contributes to the dust level here remains unknown.

Seoul Mayor Park Won-soon recently countered Beijing’s claims that China has nothing to do with the fine dust over the Korean Peninsula, citing research that suggest around 50 to 60 percent of fine dust over South Korea originates from China.

The nationwide levels of fine dust will remain high throughout the country until the cold winds from the north bring down the temperature and clear the fine dust Tuesday, according to the Korea Meteorological Administration.