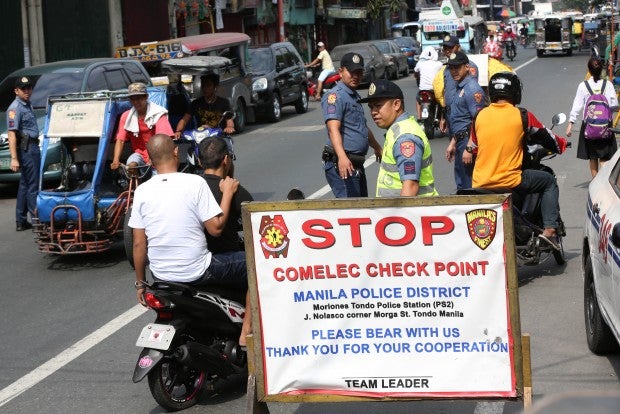 MANILA, Philippines – Three motorists were killed by the police in the 24-hour operation of election checkpoints across the country, Chief Supt. Benigno Durana Jr., spokesperson of the Philippine National Police (PNP) told Radyo Inquirer on Monday.

The circumstances on the death of the three motorists are still unavailable as of this posting.

The checkpoints were launched on Sunday midnight, January 13, in time for the beginning of the election period to intercept guns, explosives, and other weapons that could be used in crimes as the election season heats up.

The police have also arrested 25 motorists, he said.

“The first day of the election period may be considered generally peaceful yet it depicts that violent incidents may still occur due to the number of confiscated or seized firearms,” Albayalde said.

Durana said the checkpoints should only be conducted in well-lit areas, have proper signages, and led by a commissioned police officer.

The name and contact number of the local election officer should also be posted in the checkpoints.

Motorists may report any untoward incident in the checkpoints to the election officer in the area, he said.

According to Durana, the police should also only conduct a ‘visual search’ of the vehicles.

(No physical search should happen in conducting checkpoint. The motorist in the checkpoint should not be asked to alight their vehicle.)

(They should not alight the vehicle and they can refuse if they are told to open the trunk of their vehicles.  It is not allowed. It should only be plain view.)

Durana said motorists may also take videos when asked to stop in checkpoints to ensure accountability of the police.

Some police officers, meanwhile, also carry cameras to protect themselves from possible counter-charges from motorists, he said./gsg