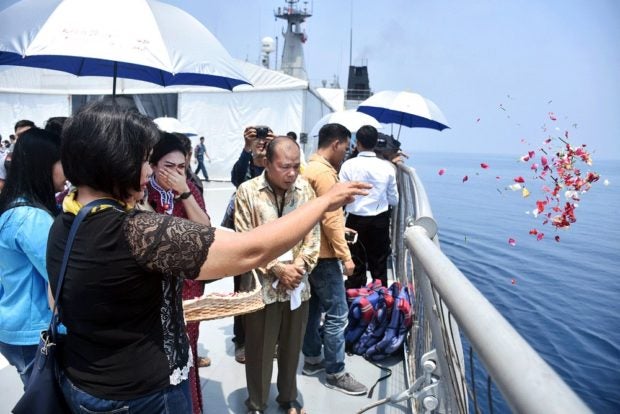 A time to remember: Family members of the Lion Air flight JT610 crash victims scatter flower petals from the deck of KRI Banjar Masin into the sea near Karawang, West Java, in a ceremony held on Nov. 6, 2018, to pray for loved ones. The Jakarta Post/Asia News Network/David Caessarre

First Fleet Navy Information Agency head Arba Agung told The Jakarta Post that an agency team was being sent to retrieve the CVR from the location where it was found. The team will first clear the mud around the CVR before it can retrieve it.

The committee said in a statement that the CVR had stopped transmitting a location signal as the battery would have lasted only 73 days after the Oct. 29 crash.

The Lion Air plane, which crashed in the Java Sea, had faulty airspeed readings during its last four flights. The cockpit conversation and background noise recorded by the CVR may be crucial to unraveling what happened during the flight’s final moments, including at least some audio from the previous night’s trip from Denpasar, Bali, to Jakarta. The aircraft experienced problems on the flight from Bali with sensors used to calculate altitude and speed.

The National Search and Rescue Agency (Basarnas) had stopped its search for remaining victims of the crash, which killed all 189 people on board.