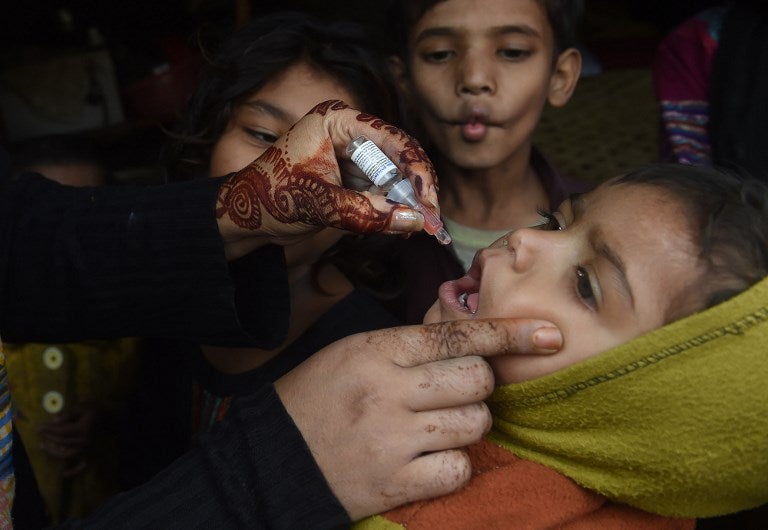 A Pakistani health worker administers polio vaccine drops to a child during a polio vaccination campaign in Lahore on December 11, 2018. – Pakistan is one of only two countries in the world where polio remains endemic. (Photo by ARIF ALI / AFP)

ISLAMABAD — With the confirmation of another case, the total count of polio cases in Pakistan reached nine in 2018.

The confirmation of the ninth case came two days after the departure of the World Health Organization (WHO) Director-General Dr. Tedros Adhanom Ghebreyesus who was on a visit from Jan 6 to 8.

Mr. Ghebreyesus had said that the missing children and refusal by parents were major challenges to the eradication of poliovirus from the country.

“Pakistan also needs to stop transmission of the virus from Afghanistan. Our New Year’s wish is ‘zero’ polio by end of 2019. The children of Pakistan and the children of the world deserve nothing less. Failure to eradicate polio would result in global resurgence of the disease, with as many as 200,000 new cases every year, all over the world,” he had said while addressing a press conference at the WHO head office, hours before heading home.

The last case was reported from Bana Manji Wala village near Lakki Marwat, where a 16-month-old girl (Anam, daughter of Afzal Khan) was brought with initial symptoms of paralysis. Her specimen was collected on Dec 20, 2018. Incubation of the sample took 20 days to confirm. The paralysis was assumed due to poliovirus or some other reason.

An official of polio program, requesting not to be named, said that according to the mother, the child developed respiratory tract infection with high fever and cough on Dec 6, 2018.

“The family took the girl to a medical facility and within a few days her condition improved and she started playing as children do. She remained on oral medicines for respiratory infection and showed no signs of weakness in any part of the body till Dec 16, when mother noticed the child was not walking properly and had developed weakness in the left lower limb,” he said.

“According to the mother, the child had received over seven Oral Polio Vaccines. The family had returned from Quetta in November after staying seven months with her spouse. The child received OPV doses at Quetta and Lakki Marwat and they never ever refused OPV,” the official said.

“Blood samples for serological assessment of immunity status have been taken from the patient and three other children from the same family,” he added.

An official said that at times, despite being vaccinated, the child got infected with poliovirus.

The official website of the polio program shows that in 2018 as many as three cases each were reported from tribal districts of Khyber Pakhtunkhwa and Balochistan. Two cases were reported from KP and one from Sindh. No polio case was reported from Punjab, Islamabad, Gilgit-Baltistan and Azad Jammu and Kashmir in 2018.