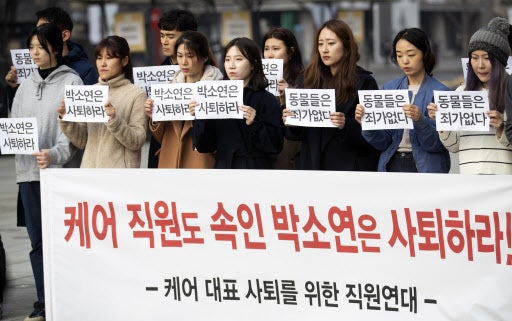 Staff of the animal protection group CARE call for the group’s representative Park So-youn to step down on Saturday. (Yonhap)

SEOUL — A growing number of people are calling for punishment for the leader of a South Korean animal rights group on Sunday after she was reported to have put down hundreds of rescued dogs.

Park So-yeon, a director of the animal rights group CARE, has put down more than 230 of the dogs her organization “rescued” between 2015 and September last year, according to a news report Friday. A former staff member at CARE revealed that Park had ordered her to do so due to a shortage of space in the shelter.

“Dogs were put down not for legitimate reasons such as incurable illnesses or aggressive behavior, but they were put down because the shelter lacked space,” the ex-staff member was quoted as saying.

Park admitted to the allegations, but said the euthanasia was “inevitable.” She said only dogs with severe aggression or incurable illnesses were put down, and only after extensive efforts to treat them first.

More than 15 petitions calling for an investigation into the animal rights group and punishment for its leader had emerged on Cheong Wa Dae’s website as of Sunday.

A group of CARE staff members said Saturday in a statement that they would do their best to normalize the organization, and demanded Park’s resignation.

“We apologize. The staff members did not know this. The decisions about euthanasia were made by Park So-yeon and certain (members of the management) at CARE,” the association representing the majority of CARE staff members said at a press conference held in central Seoul on Saturday.

“CARE (claimed to run a no-kill shelter), but it all turned out to be a lie.”

Park is also alleged to have sent the bodies of some 20 homeless animals she had put down to a veterinary school laboratory at a local university, according to a separate report. Prosecutors did not indict her, even though she could have been charged under the Animal Protection Act, because she was a first-time offender and showed signs of remorse, the report said.

CARE is one of the largest and best-funded animal rights groups in Korea, with some 23,000 members. It raised 1.9 billion won in 2017. It has been at the forefront of rescuing dogs from dog farms and campaigning against the slaughter of dogs for consumption, which is still legal here.

President Moon Jae-in adopted Tori, a homeless dog from one of CARE’s shelters, when he came to office in 2017.