Suarez — reputed to be a dog whisperer and miracle worker — is building a lakeside canine sanctuary
By: Pam Pastor - Super and 2BU Editor / @pajammy
Philippine Daily Inquirer / 07:12 AM January 13, 2019 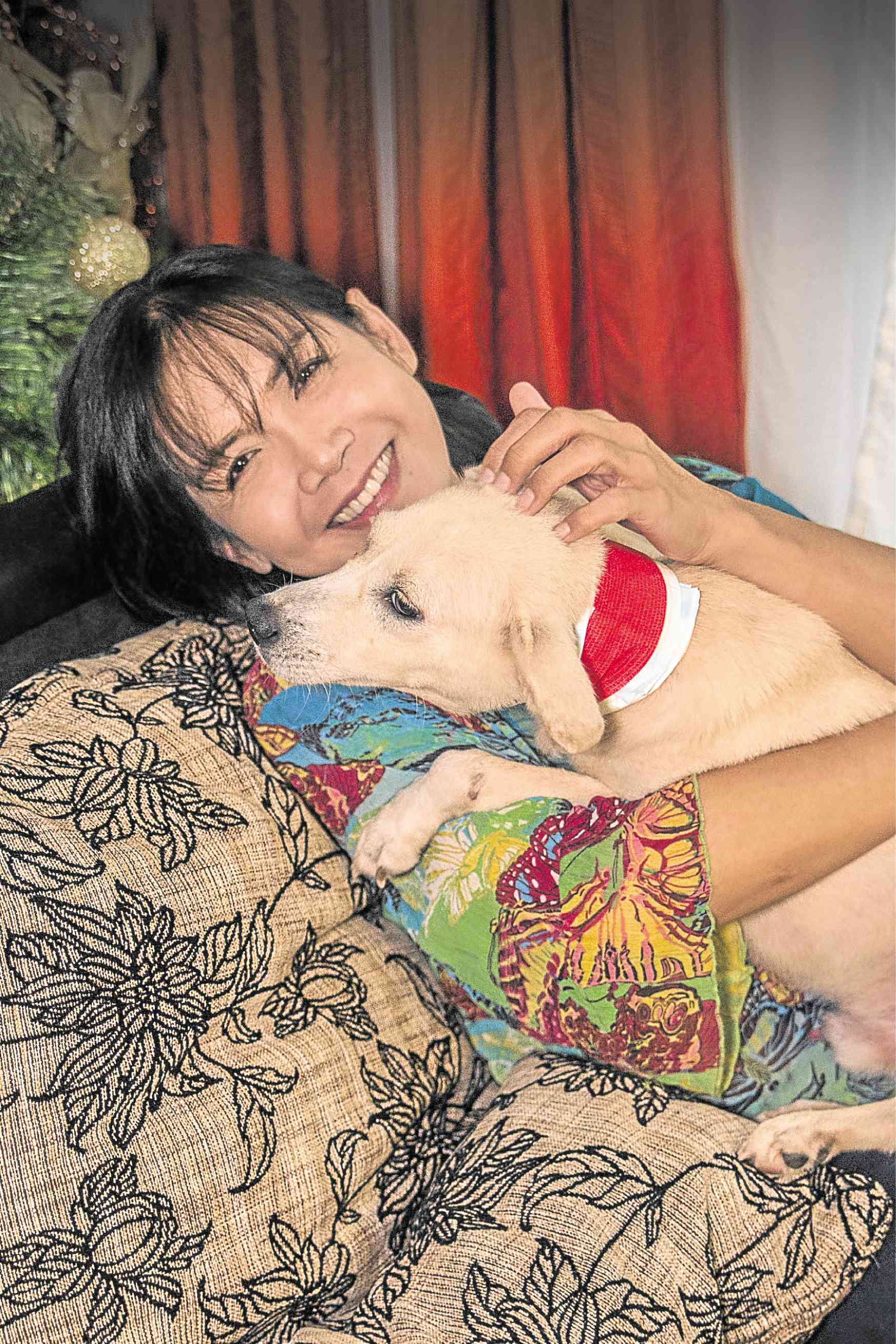 CUDDLING UP Carina with Vic, one of her rescues —TRICIA GUEVARA/NOLISOLI.PH

Carina Noralyn Suarez is talking to Buddy, a blind 15-year-old dog she had rescued in Makati some three years ago. The dog was malnourished, anemic and had a lot of broken bones and wounds, not to mention infections, heartworm, liver and kidney problems. But Carina didn’t give up on Buddy: she took him to the vet, brought him home, showered him with love and care, and watched with joy as he recovered.

Today, Lolo Buddy, as Carina fondly calls him, has found a haven in her Parañaque home and in her heart. No longer skin and bones, he can even be described as chubby.

But Buddy is just one of several dogs and cats that live with Carina. “There are more animals than humans here,” she says of her rescues which numbered 20 at one point. The number changes—some dogs are fast healers and are adopted quickly, while others stay longer, sometimes for years.

On the day of Inquirer’s visit, there was Oreo, a poodle mix that had his lower jaw surgically removed, and Max, blind in one eye, with a massive tumor, that was abandoned by his owners when he got sick. Ara was found in a heap of garbage along Araneta Avenue, while Bella, pregnant, with two broken legs and protruding bones, was spotted near Baclaran. There’s Cher, a blind Shih Tzu with a broken jaw, that was rescued in Nueva Ecija, and Iqor, another hit-and-run victim.  And Minggoy the cat, as well as two dogs confined at Pet Mobile in BF Parañaque where Carina usually brings her rescues.

The rescues have taken over her home. “I no longer have a social life,” Carina confesses, adding that she has nixed dinner with friends at fancy restaurants. “I’d rather spend the P1,000 plus for a meal on a sack of dog food,” she says. 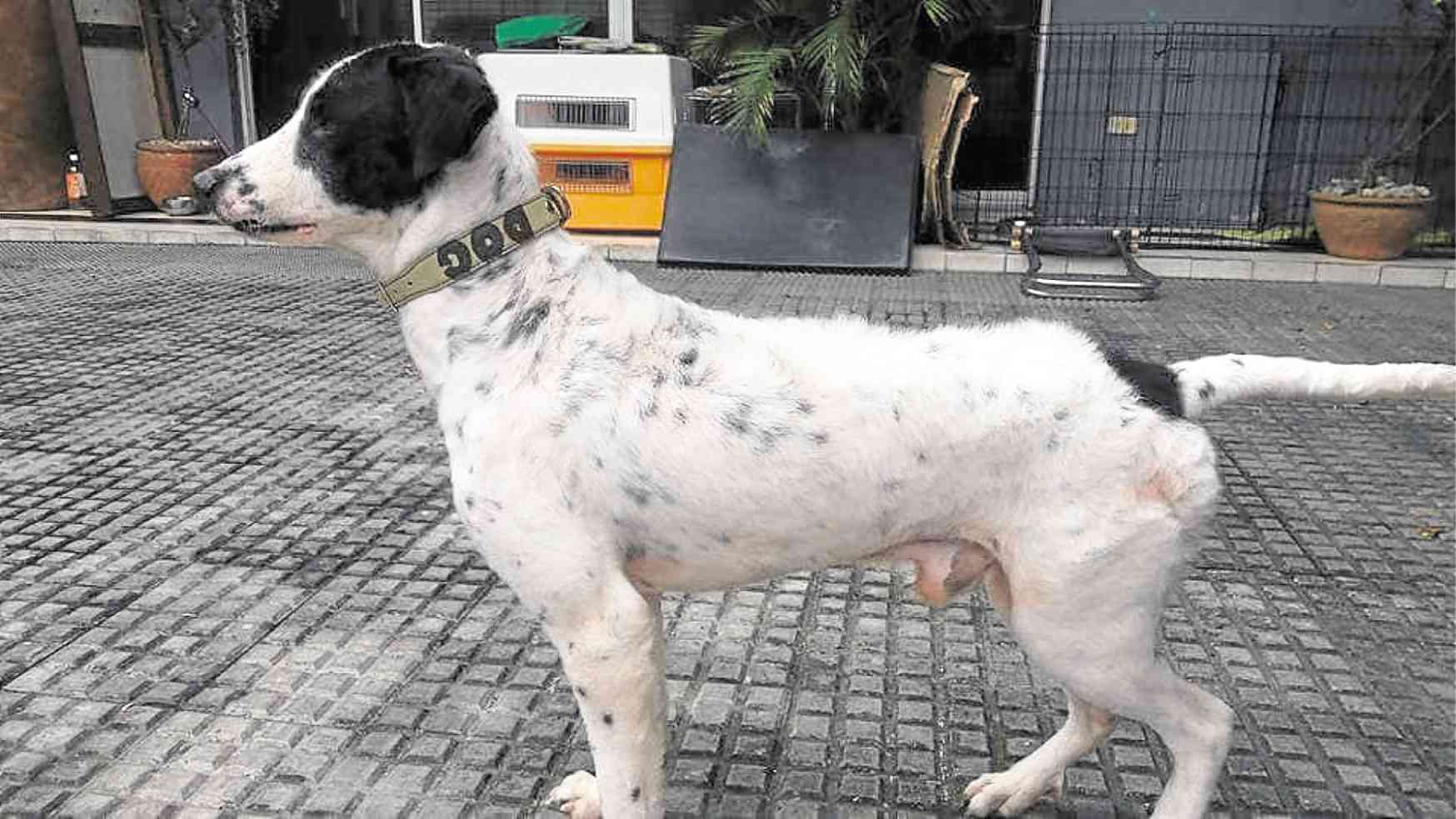 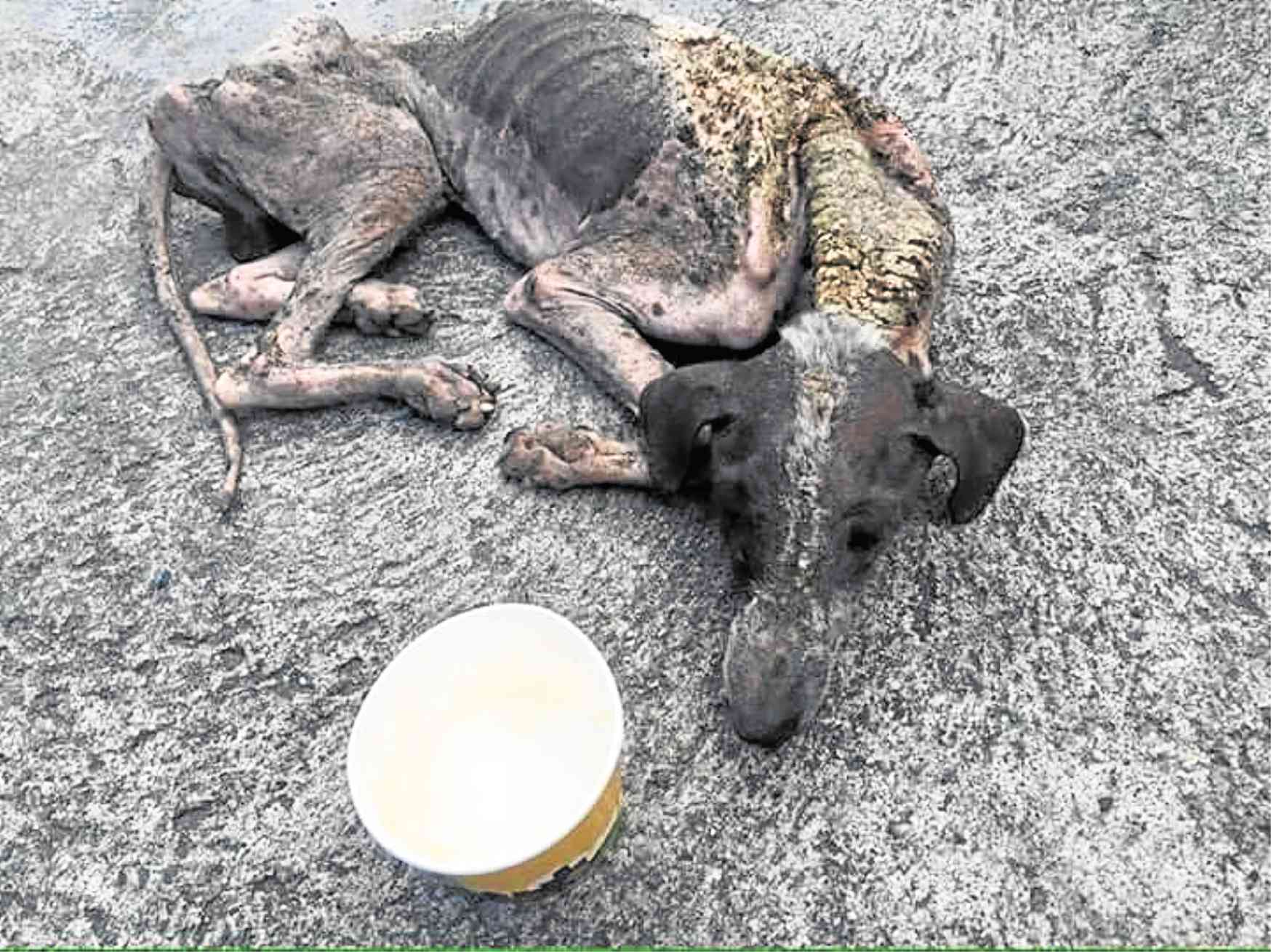 TOP THAT! Topper before (above) and after. The dog, which was found in critical condition near Villamor Air Base, changed everything for Carina. —PHOTOS FROM CARINA SUAREZ’S FACEBOOK

Earnings from her salon Miss C at Better Living, Parañaque, and from property rentals go to the food, medications and veterinarian bills of her rescues.  When they’re not enough, she does fundraisers, she says.  “But whether or not people pitch in, I’ll provide,” she adds.

Her Facebook posts are filled with updates on the rescues and the “angels” who help her out. “Empathy is not enough. We have to do something—give food or water if that’s all you can do  But if you have the chance, coordinate with groups about possible adoption. Call people. Ask for help,” she says.

But while rescuing dogs gives one a warm fuzzy feeling, it also opens you up to heartaches, says Carina. The dogs don’t always survive and those that do eventually find new homes. “Rescuing a dog, rehabilitating it for years and then letting go, that’s painful,” she says. “But when you love someone, you have to set them free. You don’t think about what you feel.”

To make the pain worth it,  Carina carefully vets the adoption process. “I screen, I check. I look for referrals. That’s why some dogs stay here for a long time.  Until I find them a better home than what I can give, they stay.  The adoption is not meant to relieve me of my responsibility. If it’s not good enough, I’d rather they stay here with mama.”

Taking care of others seems second nature to Carina. Her mother and aunt, both of whom suffer from dementia and Alzheimer’s disease, live with her. Two brothers, one of them a survivor of multiple strokes and is semiparalyzed, also share her home.

“I don’t see it as a burden. You get accustomed to responsibilities and forget about yourself,” she says.

Carina is no stranger to sacrifice. After her father died when she was young, she gave up her dreams of becoming a doctor and helped out in her mother’s small “carinderia,” cooking banana cue and barbecue. To earn school allowance that she shared with six siblings, she cleaned the homes of relatives and delivered pig slop, lugging large pails across a main road. “I had to cope. That’s why I’m strong and I’m thankful for that,” she says.

Years later, she found a better life in Japan where she worked as an entertainer before putting up her own theater bar and international manpower agency with business partners. “I learned how to live the good life. I earned big money abroad and was able to buy some properties and build this house,” she says. “The money was good, business was good.”

She never forgot her family back home and regularly sent them money that saw several relatives through school. “I think that’s why I never became fabulous and frivolous,” she says. “I was careful with my money because I know how it was to be hungry.”

Amid the success came another trial: Carina was diagnosed with colon cancer around 2006. “I had to choose between life and money,” she says. She decided to leave her business behind and return to the Philippines to heal.

She arrived home with her two Pomeranians, Duchess and Princess, that she credits for helping her recover from cancer. She recalls the first moment she held Duchess at that pet shop in Japan. She was already sick then. “Duchess started kissing me and I started crying. There was this release, something broke down. This other customer said, ‘Oh, she found her mama.’”

Back in the Philippines, her passion for Pomeranians grew.  She became active in dog shows and started breeding Poms, though her love for animals went beyond her adorable furballs.  She would go out and feed cats and dogs in the streets, read updates from rescue groups, donate money and, eventually, provide transportation for rescues. 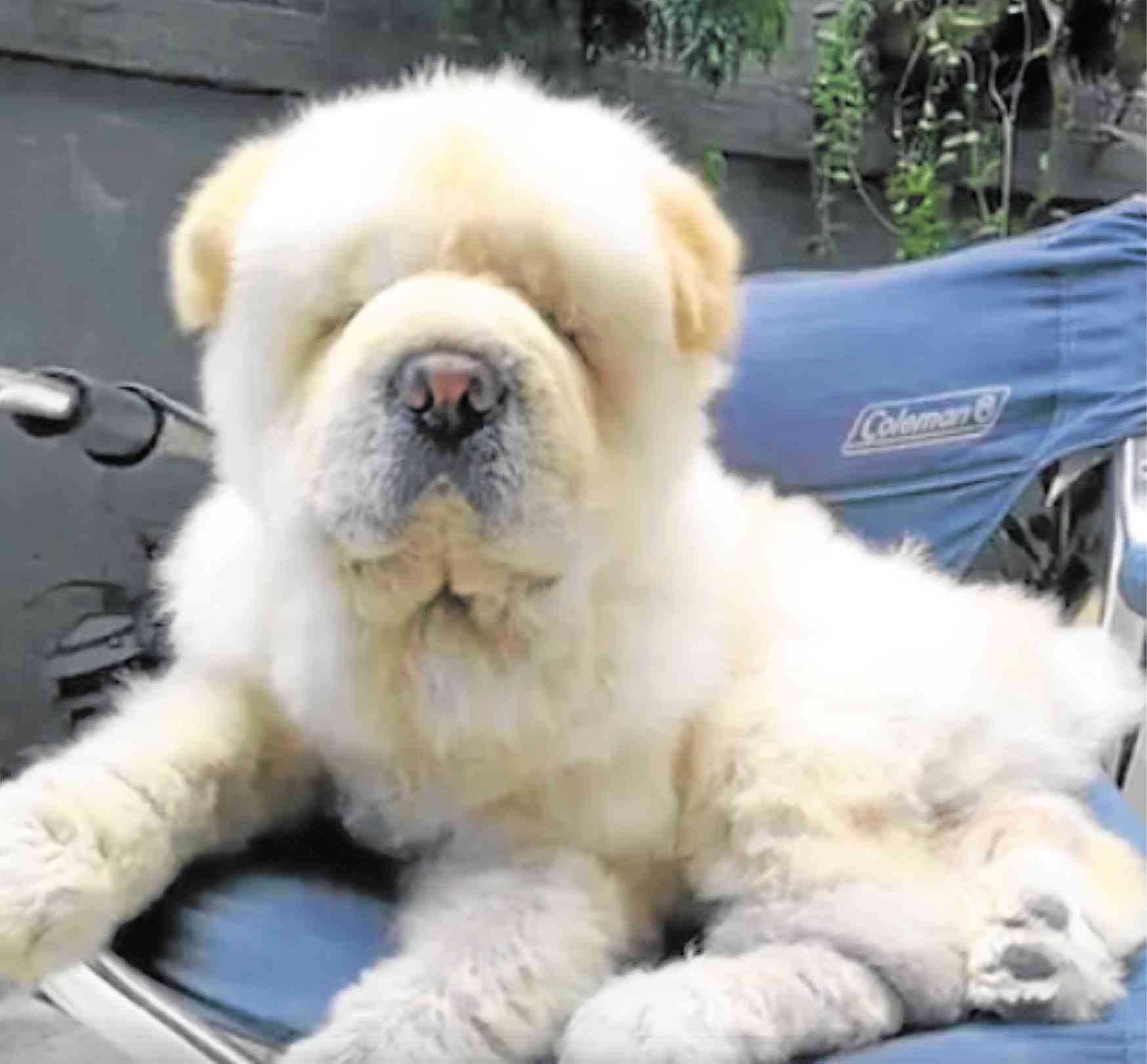 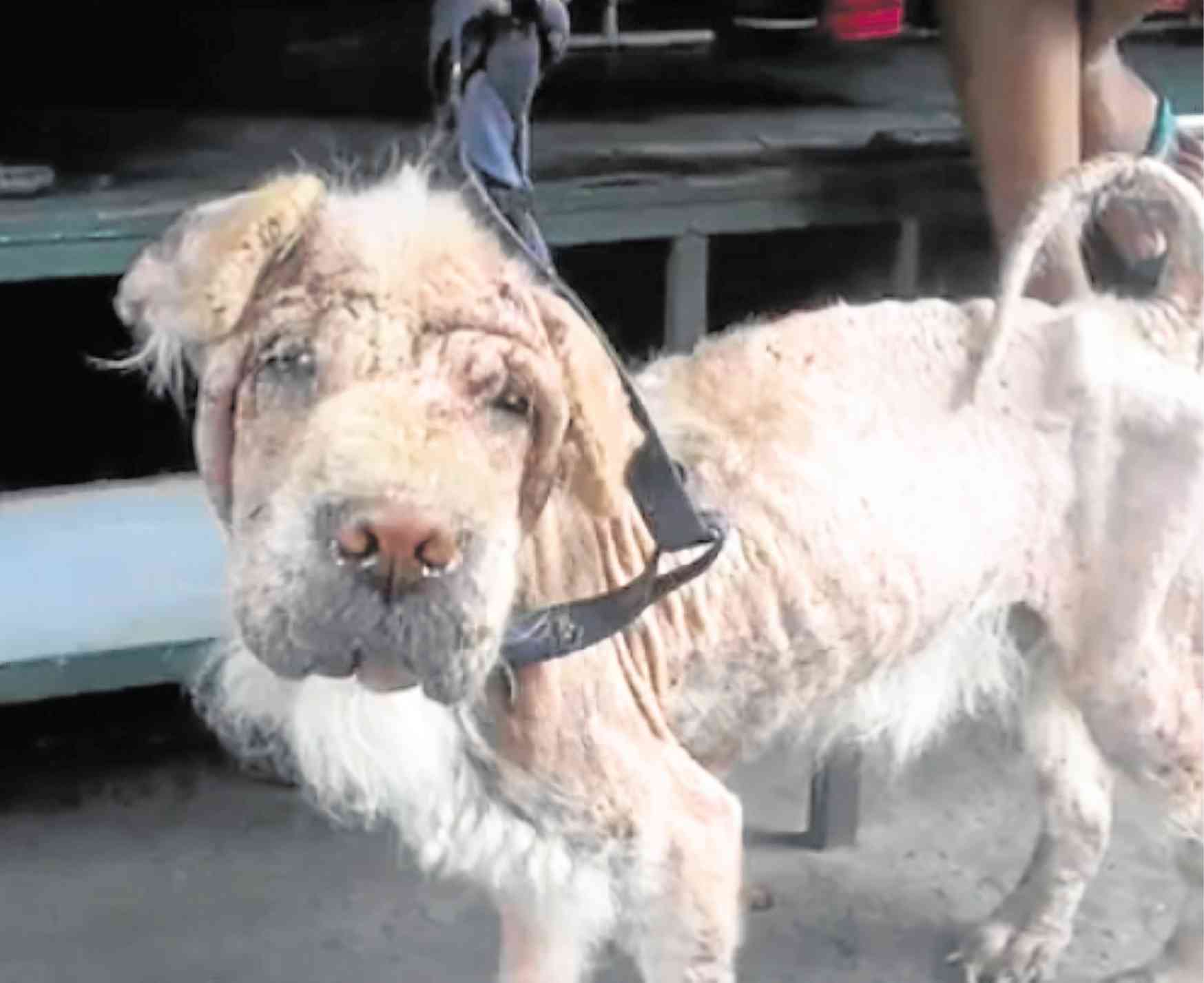 FUR BALL Pochie after (top photo), and when found (above)

When she rescued Topper from a school near Villamor Air Base, everything changed. “The guard said they’d throw the dog into the creek because it obstructed parking.  I had witnessed people rescue dogs and thought, I can do that, too.”

She used a hotdog as bait and Topper approached her, crying. Carina was crying too. The dog was deathly thin, his skin was in terrible condition and he was being eaten alive by ants. But Topper was a fighter and so was Carina. “The message was clear: we’re fighting this together.”

Though the dog was in critical condition—he had an infection and his vitals were extremely low—Carina saw that he was a fighter clinging to life and took care of him. Topper was eventually adopted. Carina believes that God gave her Topper to prepare her “for more complicated and serious cases.”

And there were many—some of them in such dire condition that Carina has been described a  true dog whisperer and a miracle worker for pulling them through.

There was Pilar which was spotted walking on just her front legs and dragging herself along in San Mateo, Rizal. Four vets had given up on the crippled dog with skin issues, an infection, and low blood count. Her spine was bent and broken and doctors said surgery—which cost Carina P80,000—was no guarantee. 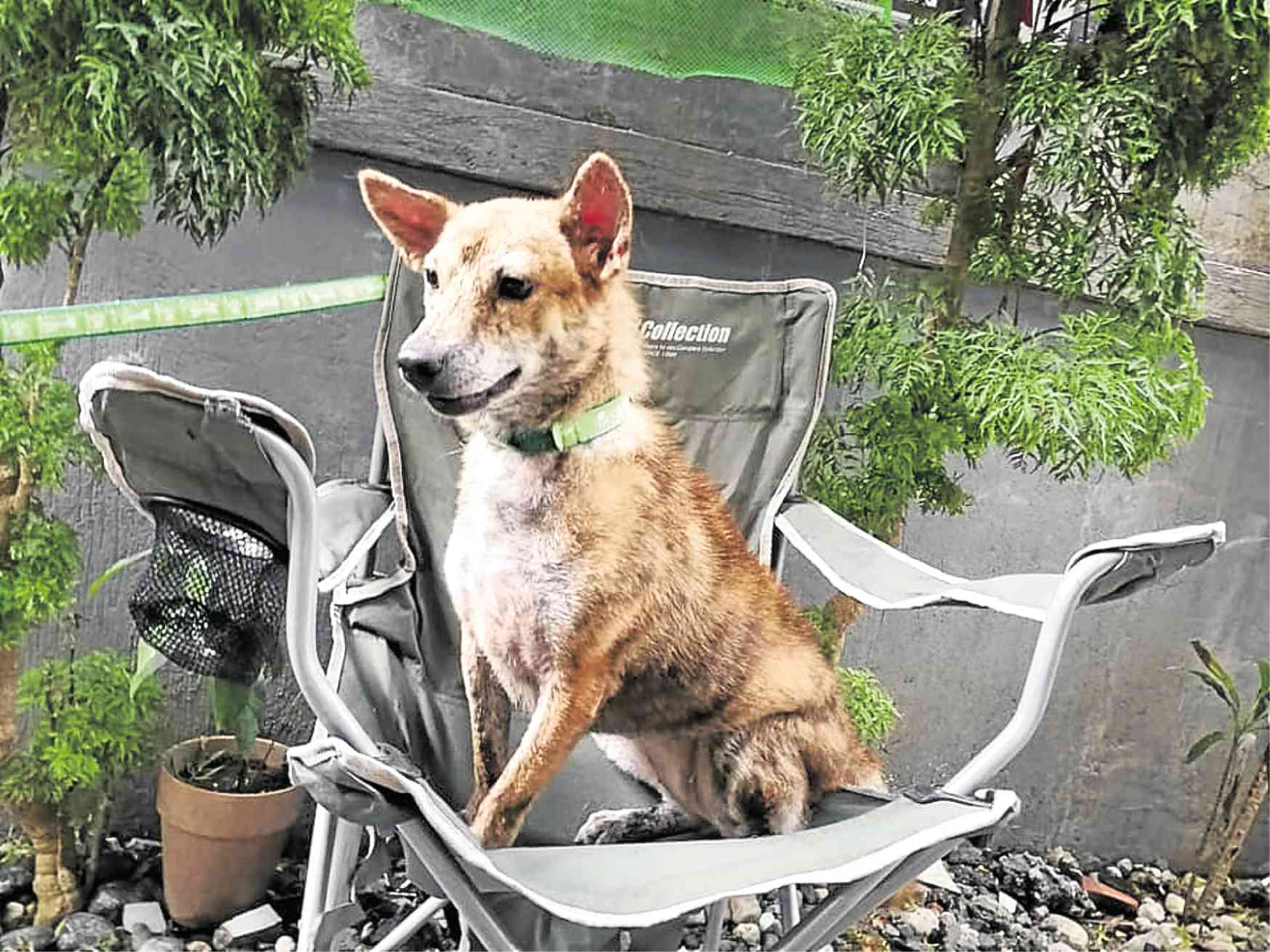 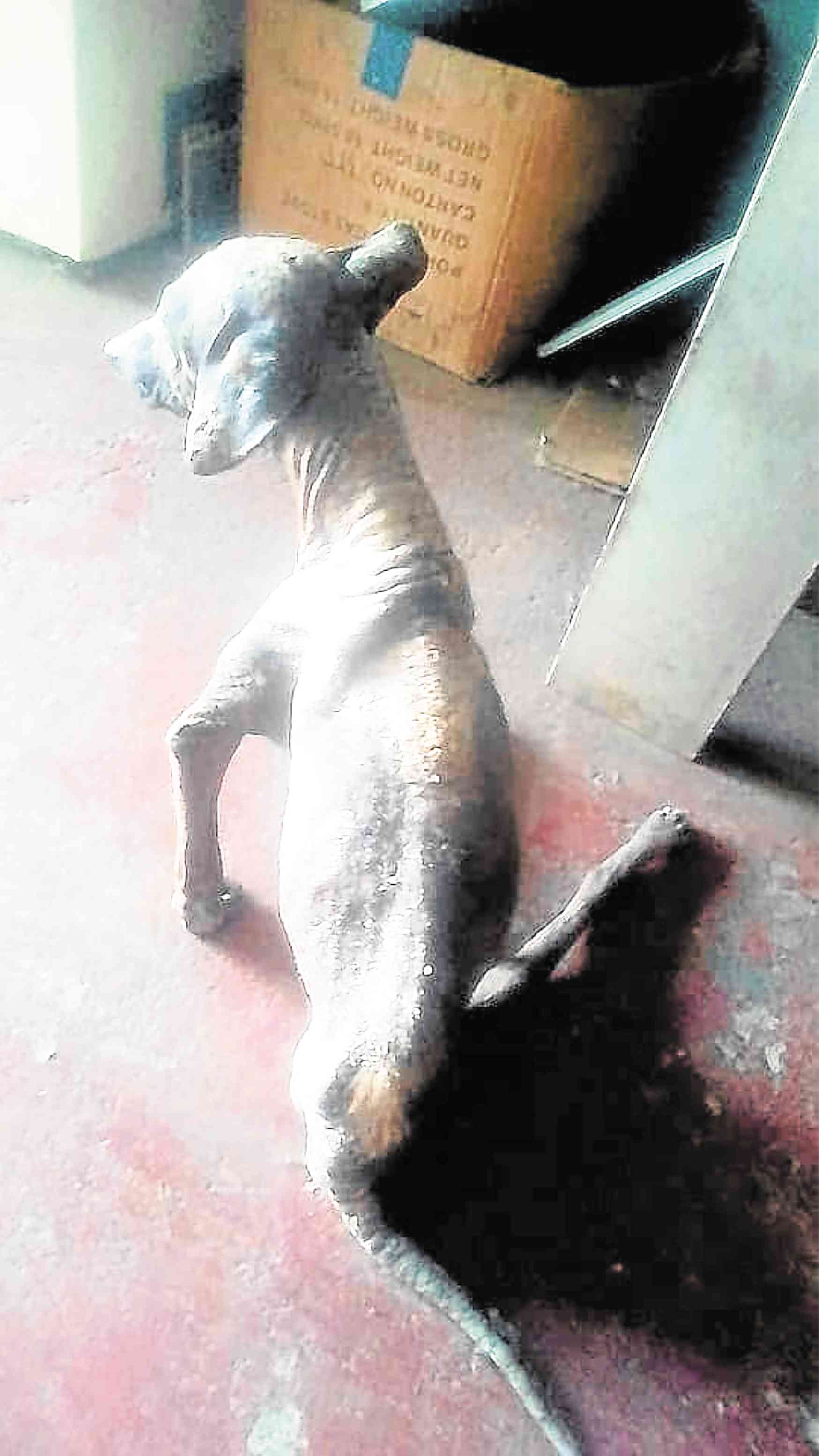 SKIN AND BONES Pilar, before (above) and after —PHOTOS FROM CARINA SUAREZ’S FACEBOOK

“We got home, I laid down a mat for her and she started to stand to follow me. She was trying to walk so she could go near me. I started massaging her and we did therapy. On the third day, she was walking on her own,” Carina recalls.

Then there was Victor, found outside a restaurant in Parañaque, with a plastic rope around his neck and a weeping wound. Carina started caring for him, cooking for him and cleaning his wound which turned out to be quite deep. When we met Victor, he still had a bandage around his neck but looked much healthier.

There were so many others who received miracles. Felix. Potchie. Chowder. Sam. Farrah. Carmel. Baninay. 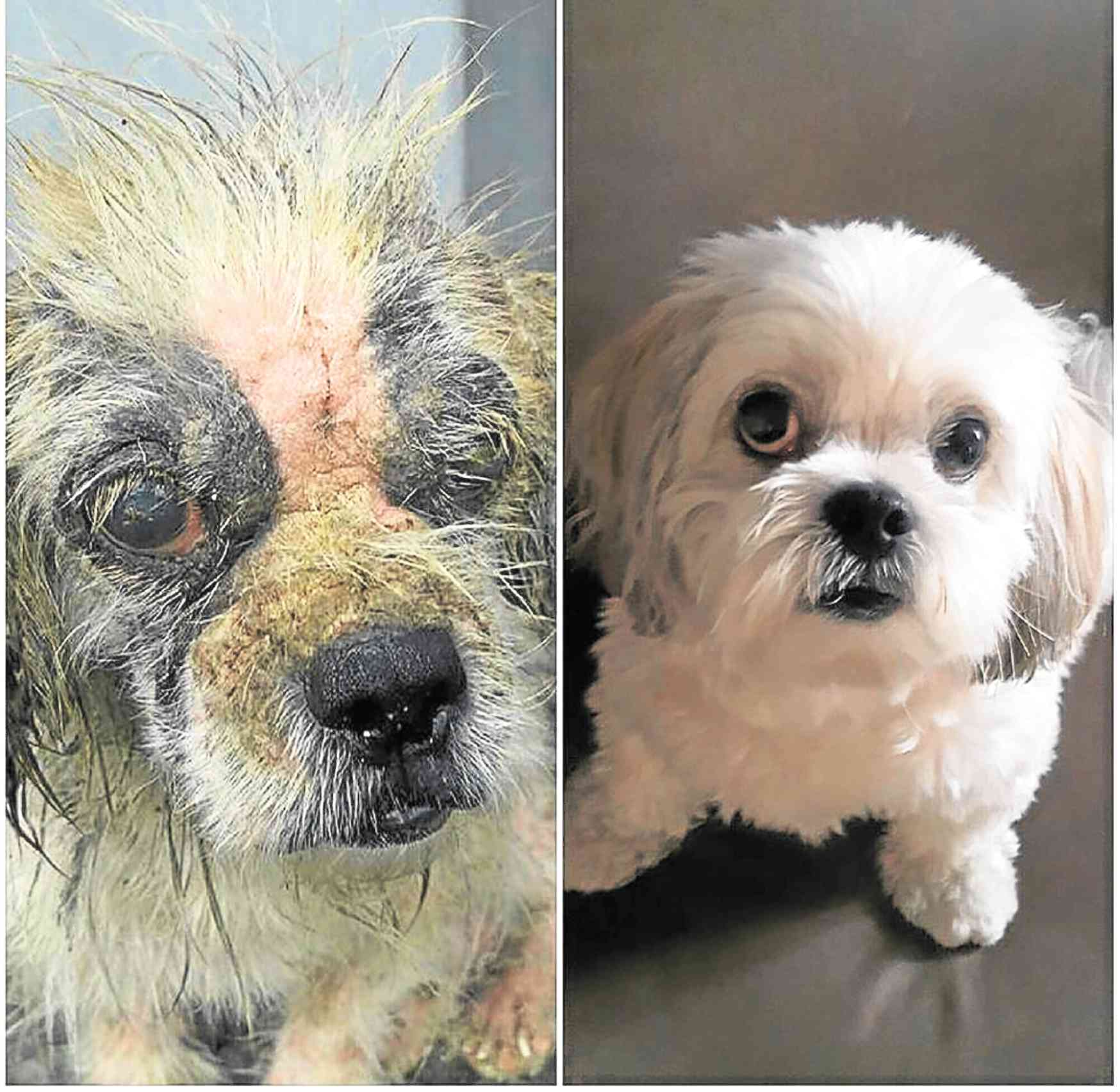 SMALL WONDER Chowder, before (left) and after.

And Carina, who recovered from cancer.

Though she still suffers the pain of denervation—the loss of nerve supply because of disease, chemical toxicity, injury, or surgical interruption—she says she feels much better now.

“I think doing what I do now helped me become stronger.  There’s the motivation, the adrenaline rush for the right reasons. I get the extra energy because I have to do this or (my dogs) die.”

She’s had to step back from being active in the dog show circuit though, says this top breeder of Pomeranians, because of the expense involved.  “Saving lives takes precedence over getting trophies and the fame that we had the past years. That’s my choice.”

At the moment, she’s focused on building a sanctuary by a lake in Cavinti, Laguna, for older dogs that may no longer be “adoptable.” The sanctuary will be called Mama’s Cradle. “I’m their mom. When they hear my voice, they want to be near me.”

But Carina had to sacrifice a lot to start construction on the sanctuary, including letting go of her Pomeranian Dante to find the money for it. 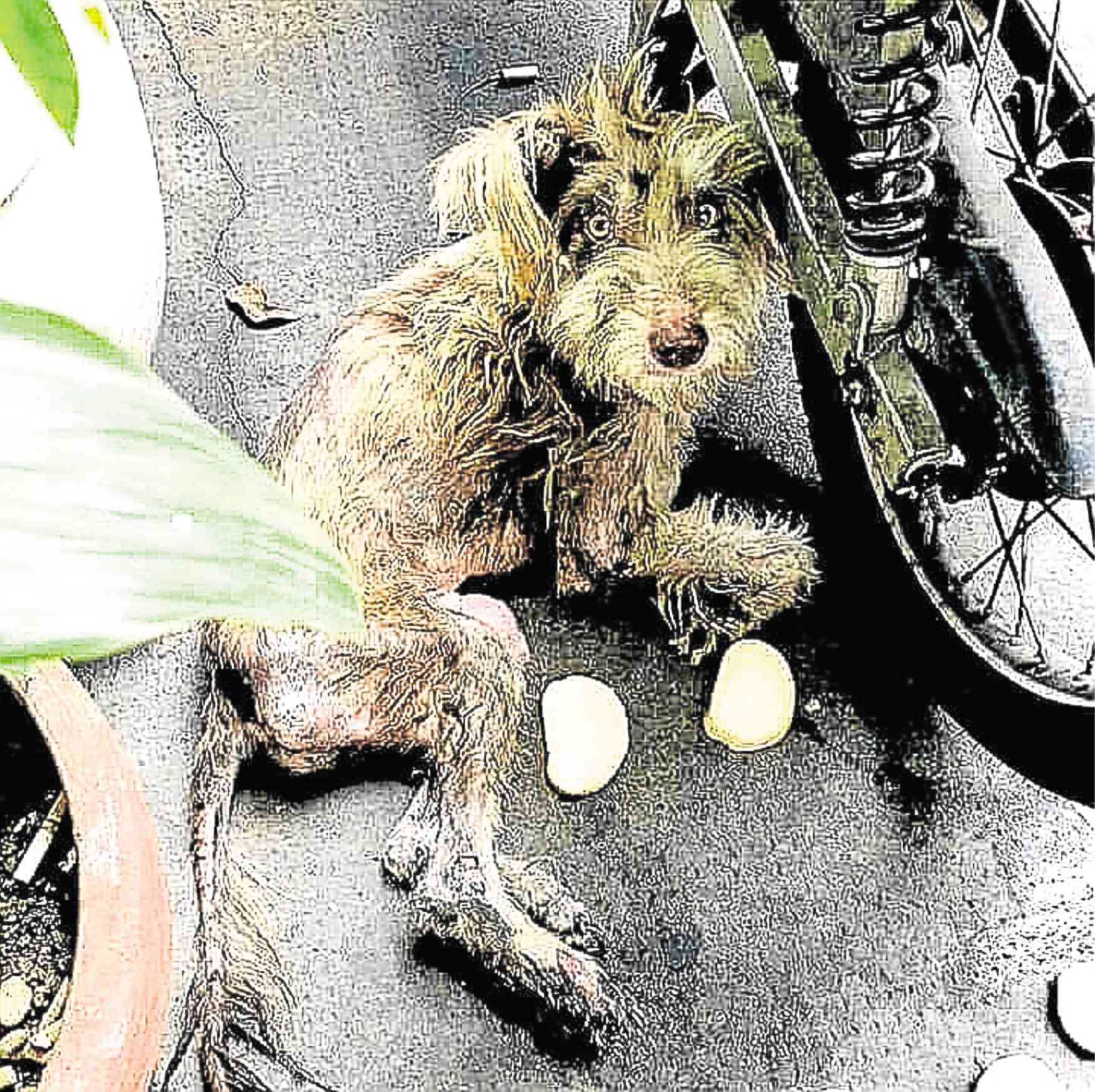 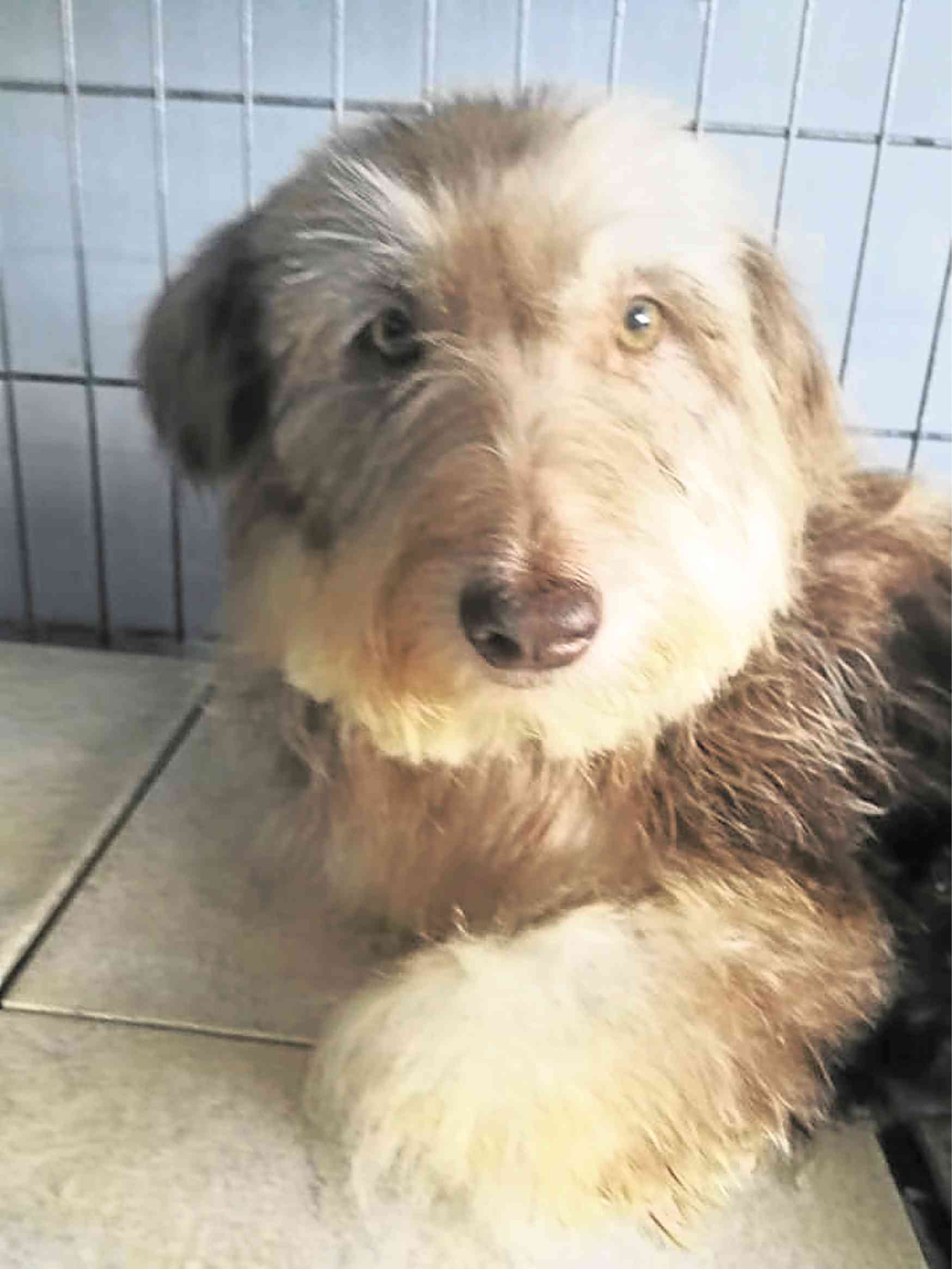 HERE’S LOOKING AT YOU Peter, before (top photo) and after —PHOTOS FROM TRICIA GUEVARA/NOLISOLI.PH

Tears streamed down her face when she confessed that he was her best in show winner.  “I talked to him, I said ‘I’m sorry, I have to do this … but you will be saving a lot of lives.’

A lot of work still needs to be done on Mama’s Cradle, with Carina looking for a truck to transport to Cavinti the scraps of wood, used tiles and steel matting she has been collecting.  She’s also looking into purchasing solar panels and borrowing a genset. “I’ve become a beggar, but it’s not for me,” she says.

But given how this dog whisperer has worked miracles, the sanctuary is bound to be howling with life soon enough.