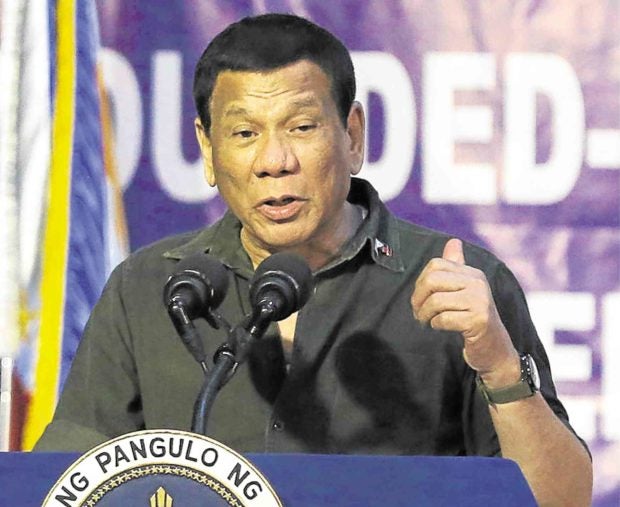 BACOLOD CITY — President Rodrigo Duterte on Saturday announced that he was firing the chief of police of Bacolod City in Negros Occidental for “enabling” the proliferation of illegal drugs in the city.

He also identified four other police officers and some civilians, including a Bacolod City councilor, who had alleged links to illegal drugs.

The President made the announcement in his speech at the private birthday party of Leo Rey Yanson, chief executive officer of Vallacar Transit, at L’Fisher Hotel on Saturday night.

Sources who attended the party said many of the guests were stunned by the announcement.

During his speech, the President suddenly looked for Senior Supt. Francisco Ebreo, chief of the Bacolod City Police Office.

“If you are here, you better stand up now. You are fired immediately,” guests at the party quoted the President as saying.

Ebreo, however, was outside the venue, securing the President’s visit.

Bulalacao said he was not sure if all of the four police officers were assigned in Western Visayas. He said that before he was assigned as police regional director, Tayuan had been moved to Mindanao.

Bulalacao said Ebreo was named for allegedly “enabling” the proliferation of illegal drugs in Bacolod by protecting police commissioned and noncommissioned officers of the Bacolod City Police Office who were involved in illegal drugs.

He said the President called Ebreo to a meeting on Monday.

Bulalacao said he was surprised by the inclusion of Ebreo because “all the while I was trusting him about our campaign against illegal drugs, in fact he has been delivering substantial accomplishments.”

“But I have to investigate and follow the instructions of the President because he must have a basis for announcing these names,” he added.

Two sources told the Inquirer the name of the councilor linked by the President to illegal drugs, but both refused to go on the record.

Other guests in the party also refused to go on the record on the identity of the councilor. /atm