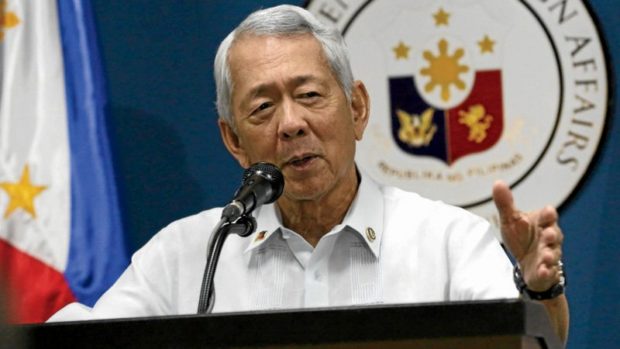 MANILA, Philippines — Former Foreign Affairs Secretary Perfecto Yasay shed some light on the “passport mess” and called for a thorough investigation of the matter.

In a Facebook post, also shared by current Foreign Affairs Secretary Teodoro Locsin Jr. on Twitter, Yasay said he believed that requiring “the already harassed and exasperated applicant to bring their birth certificates and other supporting documents for the renewal of their passports because the outsourced passport producer allegedly took all the data when its contract was unduly terminated, is most likely only part of the whole true story” that Locsin was being informed about by “certain DFA officials involved in the passport mess.”

Yasay said this after Locsin revealed that a former outsourced passport contractor “took all” the data after its contract was terminated.

To provide some background, Yasay said that on Aug. 1, 2006, the Bangko Sentral ng Pilipinas (BSP) and the DFA had entered a memorandum of agreement (MOA) covering the procurement and centralized production of machine readable electronic passports (MREPs) in compliance with the standards required by the International Civil Aviation Organization (ICAO).

To implement its obligations under the MOA, the BSP awarded, through bidding, the main part of the project to Francois-Charles Oberthur Fiduciare (FCOF) of France through its office in Makati, Yasay noted.

However, he said that on Oct. 5, 2015, the DFA awarded the production of a new electronic passport system to APO Production Unit Inc. (APUI), which is a government printing facility, without bidding on condition that no part of the contract can be subcontracted or assigned to a private printer.

This happened even as the MREPs produced by FCOF continued to be fully compliant with the standards of ICAO.

“In stark violation of this condition, APUI engaged the services of the United Graphic Expression Corporation (UGEC) for the production of the new E-passports,” Yasay said.

“At my instance as SFA [Secretary of Foreign Affairs] then, the President during the 12th Cabinet Meeting on February 7, 2017, directed me and the Secretary of Finance to discuss with the (BSP) the transfer back to the latter the printing of the MREPs. The BSP refused to budge from its previous stand,” Yasay said.

He further explained that on Feb. 10, 2017, chief presidential legal counsel Salvador Panelo determined that the assignment of the passport printing services to UGEC “was illegal.”

Panelo, according to the former DFA chief, had “demanded that all rights over all the personal data, source code, data center and other information relating to the performance of the E-passport printing services unlawfully subcontracted to UGEC be reconveyed to the DFA or be acknowledged to be exclusively owned and controled by the DFA.”

“Upon information and belief, it appears that UGEC which continues the illegal production of the E-passports has not complied,” Yasay said.

Meanwhile, he noted that he was sharing his personal knowledge “about this passport mess” to help Locsin and the government in undertaking “a thorough investigation to ensure that the past mistakes and wrongful actions of certain DFA officials in connivance with other officials of other government agencies and even in Congress regarding the problem at hand will not be repeated.”

“Under the present scheme of things, the DFA cannot hold UGEC accountable for any breach or screw up in the printing of the E-passport,” he said.

“Indeed this matter should be thoroughly investigated without any political bias or cover-up so that the whole truth, which the public deserves will be exposed,” he added. /atm