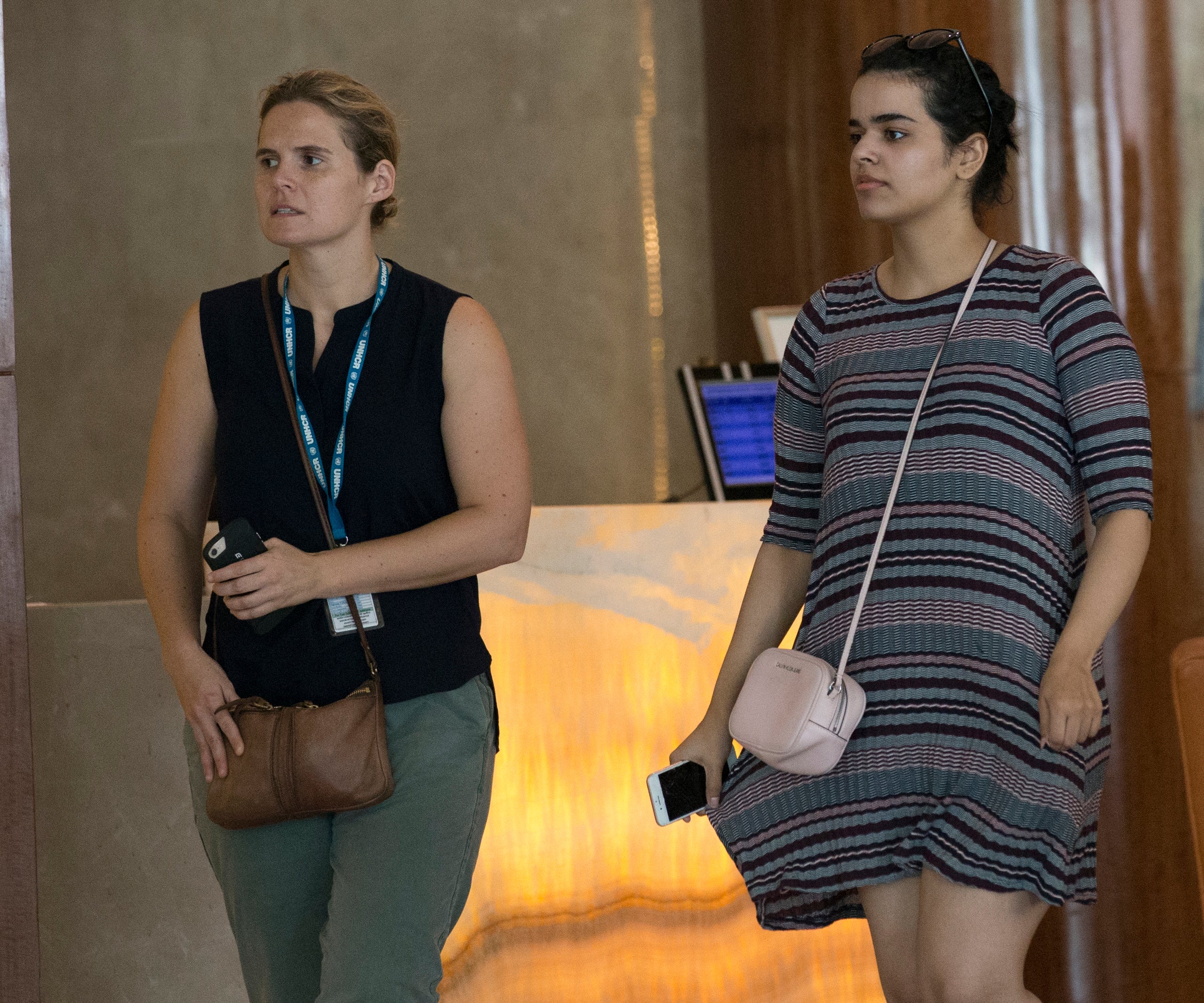 BANGKOK  — An 18-year-old Saudi woman who said she was abused by her family and feared for her life if deported back home left Thailand on Friday night for Canada, which has granted her asylum, officials said.

The fast-moving developments capped an eventful week for Rahaf Mohammed Alqunun. She fled her family while visiting Kuwait and flew to Bangkok, where she barricaded herself in an airport hotel to avoid deportation and grabbed global attention by mounting a social media campaign for asylum.

Her case highlighted the cause of women’s rights in Saudi Arabia, where several women fleeing abuse by their families have been caught trying to seek asylum abroad in recent years and returned home. Human rights activists say many similar cases go unreported.

“That is something that we are pleased to do because Canada is a country that understands how important it is to stand up for human rights and to stand up for woman’s rights around the world and I can confirm that we have accepted the U.N.’s request,” Trudeau said.

Several other countries, including Australia, had been in talks with the U.N.’s refugee agency to accept Alqunun, Surachate said earlier in the day.

“She chose Canada. It’s her personal decision,” he said.

Canada’s ambassador had seen her off at the airport, Surachate said, adding that she looked happy and healthy.

She thanked everyone for helping her, he said, and added that the first thing she would do upon arrival in Canada would be to start learning the language. She already speaks more than passable English, in addition to Arabic.

The office of the U.N. High Commissioner for Refugees welcomed Canada’s decision.

“The quick actions over the past week of the government of Thailand in providing temporary refuge and facilitating refugee status determination by UNHCR, and of the government of Canada in offering emergency resettlement to Ms. Alqunun and arranging her travel were key to the successful resolution of this case,” the agency said in a statement.

“This is so much a victory for everyone who cares about respecting and promoting women’s rights, valuing the independence of youth to forge their own way, and demanding governments operate in the light and not darkness,” he said in a statement.

Alqunun was stopped Jan. 5 at Bangkok’s Suvarnabhumi Airport by immigration police who denied her entry and seized her passport.

She barricaded herself in an airport hotel room and took her plight onto social media. It got enough public and diplomatic support that Thai officials admitted her temporarily under the protection of U.N. officials, who granted her refugee status Wednesday.

Alqunun’s father arrived in Bangkok on Tuesday, but his daughter refused to meet with him. Surachate said the father — whose name has not been released — denied physically abusing Alqunun or trying to force her into an arranged marriage, which were among the reasons she gave for her flight. He said Alqunun’s father wanted his daughter back but respected her decision.

“He has 10 children. He said the daughter might feel neglected sometimes,” Surachate said.

Canada’s decision to grant her asylum could further upset the country’s relations with Saudi Arabia.

In August, Saudi Arabia expelled Canada’s ambassador to the kingdom and withdrew its own ambassador after Canada’s Foreign Ministry tweeted support for women’s right activists who had been arrested. The Saudis also sold Canadian investments and ordered their citizens studying in Canada to leave.

No country, including the U.S., spoke out publicly in support of Canada in that spat with the Saudis.

On Friday, Trudeau avoided answering a question about what the case would mean for relations with the kingdom, but he said Canada will always unequivocally stand up for human rights and women’s rights around the world.

Canadian officials were reluctant to comment further until she landed safely in Canada.

Alqunun had previously said on Twitter that she wanted to seek refuge in Australia.

Payne said she also raised Australia’s concerns with Thai officials about Hakeem al-Araibi, a 25-year-old former member of Bahrain’s national soccer team who was granted refugee status in Australia in 2017 after fleeing his homeland, where he said he was persecuted and tortured.

He was arrested while vacationing in Thailand in November due to an Interpol notice in which Bahrain sought his custody after he was sentenced in absentia in 2014 to 10 years in prison for allegedly vandalizing a police station — a charge he denies. Bahrain is seeking his extradition.

Al-Araibi’s case is being considered by Thailand’s justice system, she said.