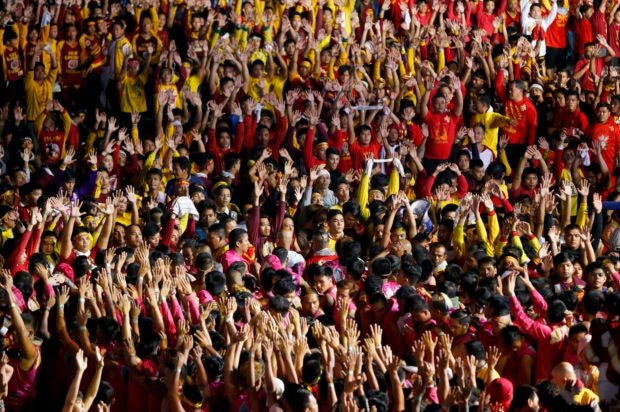 Catholic devotees raise their hands in prayer as the image of the Black Nazarene is readied for a raucous procession to celebrate its feast day Wednesday, Jan. 9, 2019, in Manila. (Photo by BULLIT MARQUEZ / AP)

MANILA, Philippines — The Philippine Red Cross (PRC) has assisted a total of 1,634 devotees during Traslacion 2019 in Manila.

PRC organized 12 first aid stations and an outdoor hospital during the Traslacion, an annual major Catholic event to commemorate the historical transfer of the Black Nazarene image from Intramuros to Quiapo Church on January 9, 1787.

The emergency and medical stations were in operation on Wednesday until early Thursday morning, PRC said in a statement on Friday.

Of the total number of patients, PRC attended to the needs of 62 devotees, who experienced severe health conditions including difficulty in breathing, laceration, bruises, and fracture; administered boiled pressure monitoring to 747; and extended psychosocial support to 197.

“We are getting better every year. Our staff and volunteers are highly experienced, equipped, and trained. These trainings have resulted in saving the lives of devotees of the Black Nazarene,” said Senator Richard Gordon, chairman of PRC.

Over 1,000 volunteers and staff from PRC’s national headquarters and eight chapters in Metro Manila were mobilized for Traslacion 2019 as early as January 7, the organization said.

PRC also deployed 50 ambulances around the procession path, as well as three rescue boats, an amphibian, a firetruck, a rescue truck, a 6×6 truck, and two humvees.

Nineteen welfare desks were also set up to provide psychological first aid and assistance in locating missing persons during the Traslacion, PRC said.

Around 1.5 million devotees joined activities leading up to the Traslacion since December 31 until January 8, while another 2.5 million devotees participated in the procession from Quirino Granstand to Quiapo Chruch from January 9 to 10, according to police data. /kga