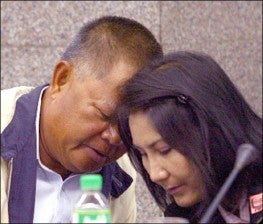 The Court of Tax Appeals on Wednesday deferred anew the arraignment of former military comptroller Jacinto Ligot and his wife Erlinda on charges of tax evasion because of unresolved pending motions.

The Ligot couple, facing three cases of tax evasion, showed up for possible arraignment on Wednesday afternoon, but the court’s Third Division suspended the arraignment and reset it for January 16 in view of the pending motions.

Pending before the Third Division were the Ligots’ omnibus motion for deferment of arraignment and suspension of proceedings, redetermination of the existence of probable cause and motion to dismiss for lack of probable cause.

Assistant State Prosecutor Stewart Allan Mariano told the court he has not received a copy of the defense reply to the prosecution’s comment on the omnibus motion for the suspension of proceedings.

Associate Justice Amelia Cotangco-Manalastas said she has to issue a resolution on the motion and was suspending the arraignment.

“I will allow suspension of the arraignment for the last time. In the next hearing, we will proceed,” she said.

The Ligots had earlier moved for the deferment of their arraignment since the Department of Justice has yet to resolve their motion for reconsideration. They are facing a similar case before the Second Division.

The Bureau of Internal Revenue (BIR) in March filed a complaint against the Ligots in the Department of Justice (DOJ) for allegedly attempting to evade paying taxes from 2001 to 2004.

The BIR said the Ligots owed the government P428 million in unpaid taxes for that period, with Ligot having a tax deficiency of P290.2 million and Erlinda, P137.8 million.

The DOJ approved the filing of several counts of tax evasion against the couple last July.

Based on the BIR’s investigation, the Ligots did not declare a total of P164.3 million that they gained in 2003, which makes them liable for P153.2 million in taxes, excluding interest and penalty.