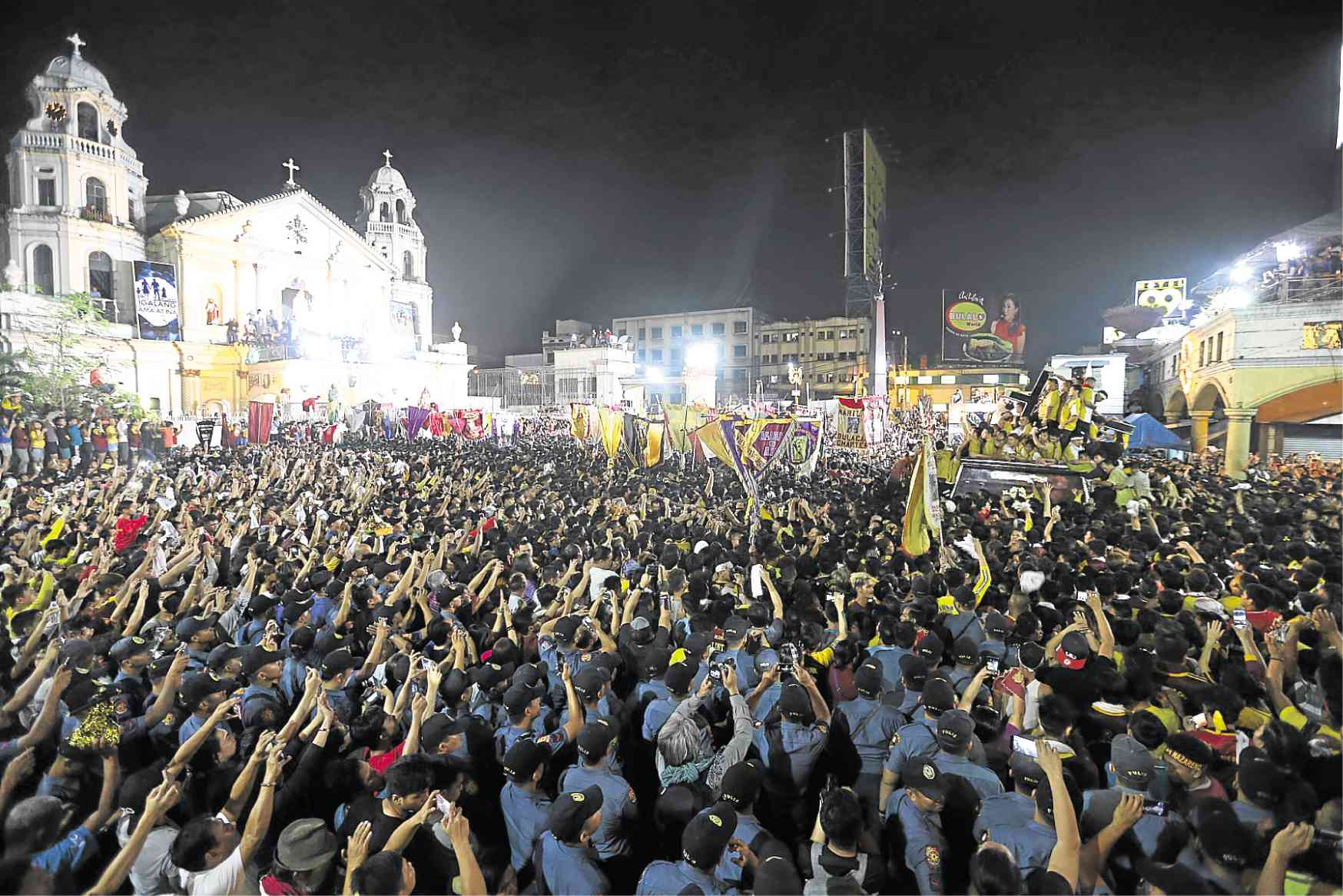 MORE BLUE THAN MAROON AND GOLD Policemen outnumber devotees waiting for the arrival of the Black Nazarene outside Quiapo Church. —EDWIN BACASMAS

Just hours ago, the two men were among the barefooted, heaving bodies pulling on the “andas” ropes—considered equally miraculous as the centuries-old icon of the cross-bearing Christ itself.

As the statue entered Quiapo Church, its final destination, more than 21 hours after it left Quirino Grandstand, the duo began praying again, unmindful of their aching backs and grimy feet.

“I’ve been doing this ‘panata’ (vow) for three years,” said Mores, a Cavite native. “To be truly called a devotee of the Black Nazarene means you have to feel pain.”

Amid perennial worries of untoward incidents, no casualties were recorded this year although 720 people were treated for injuries.

Still, this was no small miracle considering that the procession and the activities leading up to it attracted over 4 million people.

The police estimated that 2.5 million people joined the traslacion, around 2,000,000 less compared to the crowd last year.

The smaller turnout helped explain why the procession was faster by an hour, aside from being “much better and more peaceful,” National Capital Regional Police Office chief Director Guillermo Eleazar told reporters on Thursday.

He also attributed the orderly proceedings to the smoother cooperation among government agencies, volunteers and the 7,200 policemen assigned to secure devotees.

Eleazar, however, acknowledged that their crowd estimate might be conservative and promised to create a technical working group for a “more scientific assessment, evaluation and computation of the crowd size” next year.

The traslacion kicked off at 5:08 a.m. on Wednesday and reached Quiapo Church at 2:21 a.m. the next day. It lasted more than 21 hours, almost an hour shorter compared to the one in 2018.

Earlier, organizers said they expected some 5 million devotees to join the procession. But despite the smaller turnout, they were happy about the outcome, saying the celebration was more meaningful.

“It was orderly, safe and meaningful as there were many testimonies and discourses of the people’s experiences about Jesus Christ the Nazarene,” said Msgr. Ding Coronel, Quiapo Church rector.

“We were not after the quantity but the quality because we heard stories of ordinary people and their relationship with the Black Nazarene,” he added.

Quiapo parochial priest Danichi Hui, on the other hand, attributed the procession’s orderliness to the 12 prayer stations spread throughout its route. These were introduced in 2018 so devotees could simply wait for, rather than tail, the Black Nazarene’s carriage.

Some observers, however, noted that the image’s arrival at Plaza Miranda on Thursday morning was less solemn as the police outnumbered devotees.

The carriage waded through a sea of blue caps rather than spinning white towels while the usual “Vivo Poon Hesus Nazareno” chants were muted.

The priest guiding the image home was also more preoccupied with kids jockeying for a much better view by climbing the church gates.

As the carriage finally reached its destination, Leyba and Mores shouted one final “Viva!” before packing up.

What did they pray for? “Mostly I prayed for my family’s health, my own happiness,” Leyba said. “But I also prayed that someday, there will no longer be poor people, and that everyone could go to school.” —WITH REPORTS FROM MARIEJO S. RAMOS AND TINA G. SANTOS