Duterte vows to raise salary of teachers this 2019 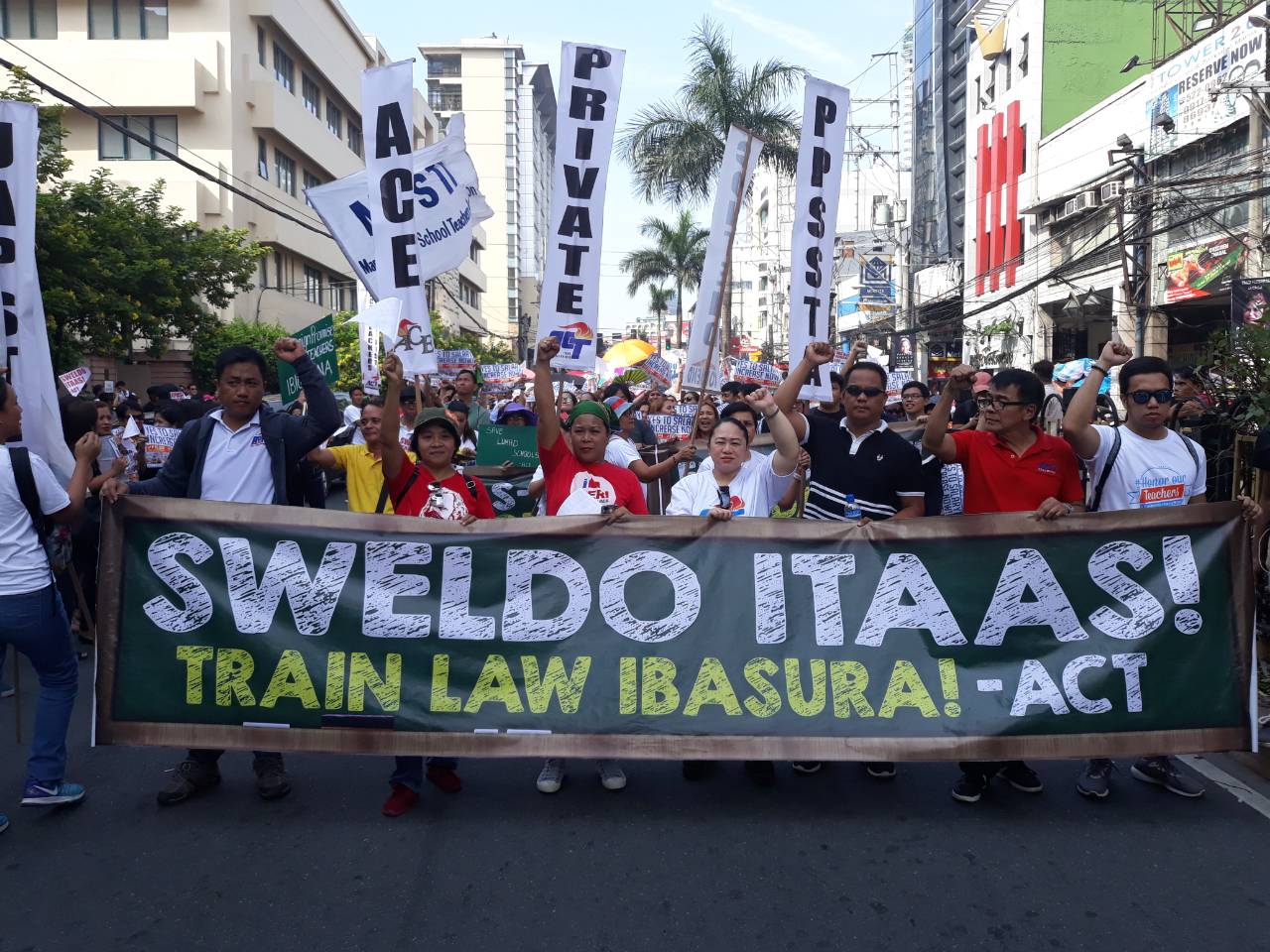 MANILA, Philippines – President Rodrigo Duterte has vowed to raise the salary of teachers this year.

“Kayo ang isusunod ko this year. Kayo ang pinakamarami,” Duterte said in a speech during the groundbreaking of the Gregorio National High School in Bulacan, drawing loud cheers from the crowd, who are mostly teachers.

He said he already talked to Budget Secretary Benjamin Diokno about the plan.

“I was talking to Diokno at the year-end to find how things could be afforded,” he said.

He said he was willing to “accommodate” and meet teachers’ representatives in Malacañang to discuss the matter.

“Ito sasabihin ko, I am willing to strike a deal in the presence of Secretary [Leonor] Briones, sa mga maestra. You can choose the date, January, bilisan lang ninyo, then we can make even an agreement or manifesto, choose whatever kind of document, kayo ang isusunod ko this year,” he said.

But Diokno clarified this.

“All government employees will get an increase in pay – the fourth tranche of SSL4 – this year, but it has to wait for the approval of the 2019 General Appropriations Act. DBM has initiated a study for the increase in compensation for government workers from 2020 to 2022,” he said in a text message to reporters.

“This year means 2019. The salary increase for all government workers is embedded in the 2019 President’s Budget, which is pending in Congress,” he added.

The 2019 national budget contains funding for the fourth and last tranche of salary increases for government employees, which implementation was mandated under the Aquino administration’s Salary Standardization Law (SSL). The first tranche of state workers’ pay hike started in 2016.

Diokno, however, said government workers’ salary increase scheduled for January 15 has to wait until Congress approves the 2019 expenditure program.

But lawmakers have called on Duterte to release the wage hike now.

House Majority Leader Rolando Andaya even warned he would take Diokno to the Supreme Court if the Budget Secretary would insist on suspending payment of state employees’ salary increases this month. /kga

Read Next
Roxas open to working with Duterte admin ‘if for the good of many’
EDITORS' PICK
SRA chief Serafica resigns following sugar importation mess
Unleash the photographer in you this World Photography Day with vivo smartphones
Tulfo questions BIR for going after online sellers instead of oil smugglers
House energy committee chair Arroyo bats for cheap electricity
The TECNO Camon 19 Series Philippine launch
Can’t control ‘ukay-ukay’ imports? Tulfo proposes legalizing it for taxes
MOST READ
Cherie Gil’s daughter on partying after mom’s death: ‘I’m grieving but it’s not my job to show you that’
Tulfo grills BIR, BOC for going after online sellers instead of oil smugglers
LOOK: Mavy Legaspi gifts Carmina Villaroel with Hermes bag on her birthday
Set for major rebuild, Chery Tiggo releases Maika Ortiz, six others
Don't miss out on the latest news and information.