Tagle defends Nazarene crowds: Not fanatics but forces of faith 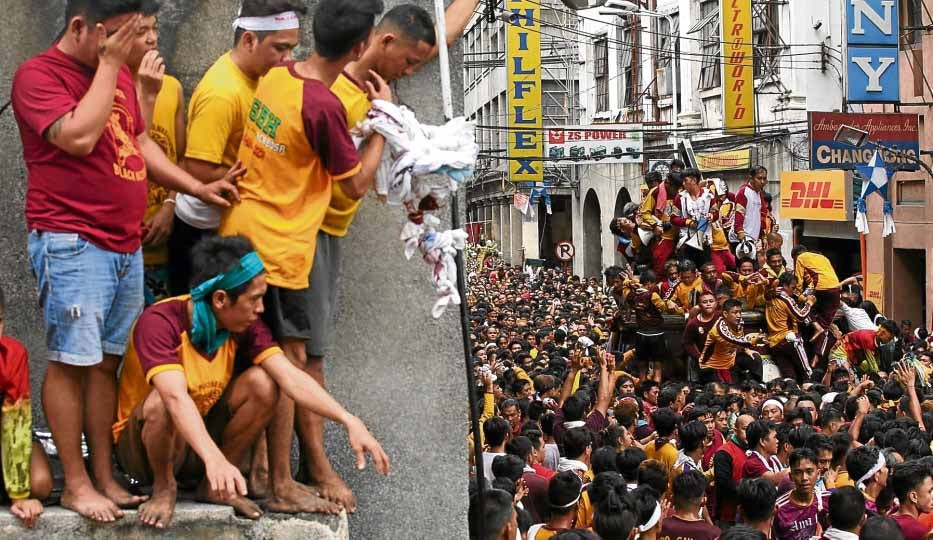 PILGRIMS’ PAUSE The image of the Black Nazarene inches its way through a narrow street in Manila’s Binondo district as several
men take a break from the annual procession that drew hundreds of thousands of devotees. —LYN RILLON

The streets of Manila on Wednesday turned into a sea of maroon and yellow as barefoot Catholics displayed their devotion to Nuestro Padre Jesus Nazareno, or the Black Nazarene, in the annual “traslacion,” a procession that reflects the Filipino’s unique brand of Catholicism, which includes folk superstitions..

The dawn-to-predawn procession down a 6.1-kilometer route commemorates the transfer of the life-size image of Jesus Christ carrying a cross to the Minor Basilica of the Black Nazarene, or Quiapo Church, in 1767.

Crowned with thorns, the Nazarene statue is believed to have been brought from Mexico to Manila on a galleon in 1606 by Spanish missionaries. The ship that carried it caught fire, but the charred statue survived.

Some believe the statue’s endurance, from fires and earthquakes through the centuries and intense bombings during World War II, is a testament to its powers.

In his homily during a Mass attended by tens of thousands at Quirino Grandstand hours ahead of the procession, Cardinal Luis Antonio Tagle, the archbishop of Manila, defended the believers in the Black Nazarene, saying they were not fanatics but devotees.

“A fanatic only clings to something that gives value to him. To a devotee, that is not the reason. You are devoted because you love. That’s what Jesus showed us. That is the true spirit of devotion,” Tagle said.

“A devotee, because he or she loves, will remain faithful, whether or not he gets something out of it,” he added.

Still, Tagle urged the faithful believers in the Black Nazarene to be devotees not only during the traslacion.

“Devotion is a daily act, in every part of the globe,” he said.

Noted Filipino historian and anthropologist Xiao Chua, who has joined the annual procession since 2015, said it could be described as a “simulated choreographed craze” that served a cultural and civic purpose.

“When you look at the procession, it looks crazed. But the craziness of it is expected by the people. They are letting themselves be stepped on [during the procession] so others can be lifted up,” Chua told the Inquirer.

Although a Protestant, Chua said he had great respect for the devotion because it was the Black Nazarene that was the last string of faith that his mother had clung to when he was struck by an illness as a child.

“Despite the fact that Catholicism is dwindling around the world, in the Philippines, the Church has learned to respect and synchronize Filipino culture with Catholicism, that’s why traditions like this still exist,” he added.

There were at least 275,000 people by the time the procession started around 5 a.m., according to the National Capital Region Police Office. The procession was expected to draw up to 5 million people.

The people chanted “Viva Nazareno!” as the statue on top of a carriage called “andas” was pulled out of the grandstand parade ground by volunteers using thick ropes.

Hordes jostled to kiss or touch the black wooden statue, believed to have healing powers.

Believers who go barefoot as a sign of penitence, scrambled over one another to touch the icon with towels. Those unable to come near throw their towels to volunteers on top of the carriage who throw them back to the crowd after wiping parts of the statue or the cross with them.

Romeo Mantes, 73, traveled all the way from Ligao, Albay province, to experience his first traslacion after dreaming about the Black Nazarene.

“In my dream, I was on top of the andas, with an oxygen tube wrapped around my nose. I took that as a message for me to serve the Black Nazarene,” Mantes said, hoping his new devotion would grant him longer life.

Rodney Zamora, 21, and his other transgender friends from Quezon City wore bright lipsticks and maroon and yellow shirts at Quiapo Church for the sixth hourly Mass of the day.

For the third year in a row, they proudly waved their towels inside the historic church, thanking the Black Nazarene for the blessings that they had received.

Wearing an ankle-length robe and crown of barbed wire, Joaquin Bordado, 70, told the Agence France-Presse (AFP) news agency he had been joining the procession for decades and believed he survived a stroke “because of him (God).”

Another devotee, Ryan de Vera, a 29-year-old former finance officer at a local bank, said he squeezed his way through the crowd to touch the hand of the Black Nazarene, which he credited for the recovery of his father from prostate cancer.

After the dangerous feat, he was pushed aside by the mass of humanity to a roadside, where his left foot sustained a deep wound caused by a sharp metal.

After getting first-aid treatment, he limped back to the crowd, still barefoot and smiling.

By early evening, more than 800 people had been treated or attended to by Red Cross volunteers for minor injuries, exhaustion and high blood pressure.

Police said they had not monitored any specific threat but deployed more than 9,000 officers and soldiers, including bomb squads backed by a surveillance helicopter, to secure the procession.

Authorities imposed a gun and liquor ban and cell-phone signals were jammed in the vicinity of the procession.

Flights over the area were prohibited along with sailing in nearby Manila Bay and along the Pasig River where special police and Coast Guard forces guarded bridges that the mass of devotees passed through. —With reports from the wires