Survey: Backpacks ranked No.1 annoyance on trains in Tokyo 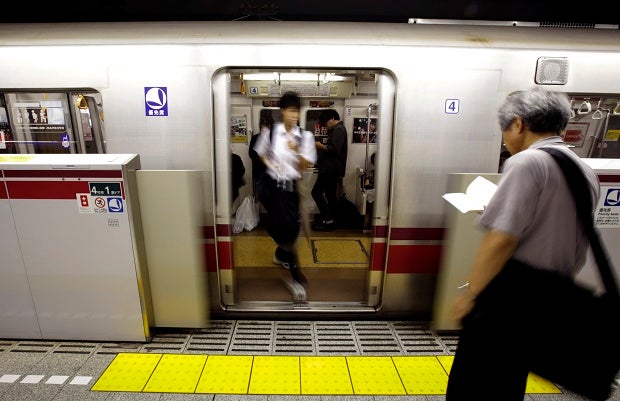 A passenger walks out from a train thought the half-height platform screen doors at a subway station platform in Tokyo. AP

TOKYO — Backpack-wearing train users in rush hour have been ranked as the biggest annoyance among commuters, according to the results of a behavior survey released by Japan Private Railway Association in Tokyo.

Carrying or storing luggage on trains in an inconsiderate manner topped the ranking of annoyances, beating drunk behavior. Complaints were focused on backpack-carrying business commuters.

The association conducted the survey online, asking people to choose up to three things that annoy them when using trains. The survey received 2,686 responses.

“Luggage-related annoyances” was ranked fourth in 2017 and third last year. This is the first time it has been ranked first since the association started the survey in fiscal 1999.

When asked for specific details about backpack-related annoyances, 66 percent of respondents mentioned the way commuters carry them on their backs or shoulders, with comments such as, “I was hit with [someone’s bag],” or “It blocked my way.”

According to the Shinjuku branch of the Isetan department store in Shinjuku Ward, Tokyo, business bags that can be carried on shoulders have become popular amid a government push for “cool biz” clothing in summer that has led to white-collar commuters wearing more casual clothes. Also, more and more people prefer having both hands free to use their smartphones.

Railway companies are calling for passengers to be more considerate and carry their backpacks in front of them or stow them on the overhead racks in train carriages.