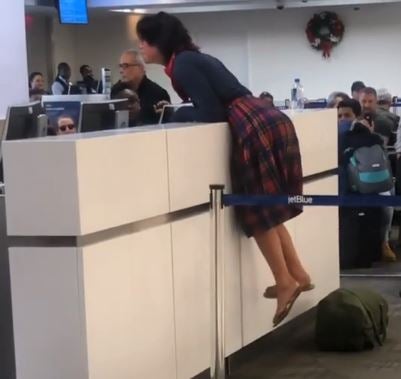 A woman at the Fort Lauderdale-Hollywood International Airport in Florida was restrained and led away by authorities after she threatened and insulted the staff of JetBlue Airways.

The woman, identified by reports as Sabrina Thomas of San Marcos, California, was denied boarding for “indications of intoxication,” as per Yahoo Lifestyle on Jan. 8. The incident happened last Jan. 6 and was captured and shared by artist manager Dre London via Instagram.

In the video, Thomas can be seen hoisting herself up on the counter and screaming at a JetBlue airways worker who was speaking to somebody on the phone. At one point, she called the worker a “rapist” and threatened gun violence by saying she had a gun on her.

I wake up this am to my video going viral & many calls including @foxnews – So yesterday I was stuck in the airport for 10hrs as #JetBlue flight was canceled due to computer failure. They said we would send another plane from New York but this took many hrs. While in Fort Lauderdale airport everyone remained calm apart from this woman who went crazy on #JetBlue staff called him a rapist & she said she had a gun on me + many crazy things in front of kids Swipe right to see the end of chaos🤦🏽‍♂️

A sheriff deputy responded to the F concourse after being told of a passenger causing a disturbance, as per an incident report via the DailyMail.com on Jan. 8. According to the deputy, Thomas threw her duffel bag at a wall and her passport on the floor when he encountered her.

“She then threw at me a boarding pass that she ripped into several pieces,” the deputy was quoted as saying. Thomas also yelled at the cops, saying, ‘I’m racist against white people, I f***ing hate white cops.'”

“She displayed erratic mood swings which went from crying to silent and still to very loud and aggressive without warning,” another sheriff said in the report.

Thomas was escorted off the Fort-Lauderdale airport and brought to the Broward General Hospital as an involuntary Baker Act patient for her display of “bizarre behavior” and “irrational statements.” Cody Cepeda /ra

‘There’s no turning back:’ Palace says of task force probe on PhilHealth mess