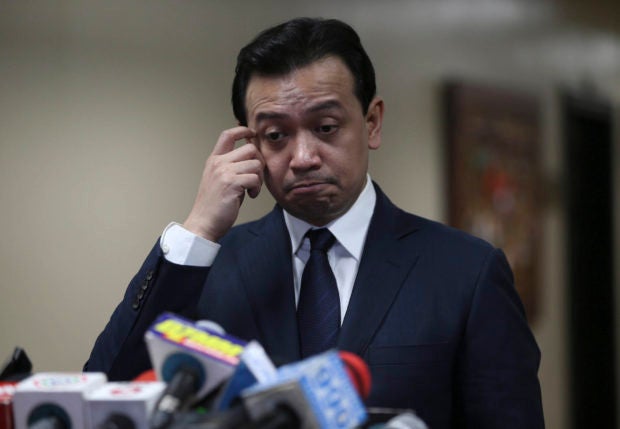 APPEAL Sen. Antonio Trillanes IV will appeal the Makati Regional Trial Court decision upholding the issuance of an arrest warrant against him for rebellion, according to his lawyer. —INQUIRER PHOTO

The decision of the Makati Regional Trial Court (RTC) affirming the issuance of a warrant for the arrest of Sen. Antonio Trillanes IV in connection with the government’s revival of a rebellion case against him smacks of double jeopardy, the Integrated Bar of the Philippines (IBP) said on Tuesday.

Trillanes is considering appealing the ruling or questioning it in higher courts, his lawyer said.

But Malacañang said the law was just catching up with Trillanes, whose amnesty given by the government in 2010 for participation in attempts to overthrow President Gloria Macapagal-Arroyo in 2003, 2006 and 2007 was voided by President Rodrigo Duterte in August last year.

“Senator Trillanes’ comeuppance is finally knocking at his door, and he can only blame himself for the situation he embroiled himself in, for he created his own quagmire,” presidential spokesperson Salvador Panelo said in a statement.

“What’s happening to him should strike fear in the hearts of those who after being financed by taxpayer money for their education will plot against the government that nurtured them as well as those who use their political power to shield them from accountability as they malign and sow intrigues against persons they dislike even inciting the citizenry to hate duly constituted authorities,” Panelo said.

Trillanes had angered President Duterte after the senator accused him of stashing unexplained wealth in secret bank accounts and linking one of his sons and a son-in-law to the illegal drug trade last year.

The President issued Proclamation No. 572 voiding Trillanes’ amnesty, ordering his arrest and reviving the rebellion and coup d’état cases that had been brought against him. The Makati RTC dismissed the two cases in 2010 after the amnesty grant.

The President, however, said Trillanes did not apply for amnesty nor did he admit guilt in attempting to overthrow Arroyo.

The Department of Justice (DOJ) asked Makati RTC Branch 148 to revive the coup d’état case and Branch 150 the rebellion case.

Judge Andres Soriano of Branch 148 rejected the DOJ’s motion, ruling that the case was dismissed in 2010 and that revival was not allowed under the rules of court.

No copy of application form

But Judge Elmo Alameda of Branch 150 granted the DOJ petition and ordered the arrest of Trillanes who, he said, failed to show copy of his application for amnesty.

Trillanes appealed the decision, submitting documents and the affidavits of Col. Josefa Berbigal, the former head of the secretariat of the amnesty committee of the Department of National Defense (DND), and the head of the committee, Honorio Azcueta, both of whom testified that he applied for amnesty.

Trillanes, however, could not show his application form, as this was lost in the DND archives, and the loss was reportedly discovered after Solicitor General Jose Calida came asking for it last year.

During a hearing last year, prosecution witnesses admitted that all the records, minutes and other documents related to the amnesty given to Trillanes and 276 other military mutineers were missing from the DND archives.

In a decision dated Dec. 18, 2018, but released only on Monday, Alameda rejected Trillanes’ appeal, citing his failure to produce his application form and explain its loss.

In his original decision in September last year, Alameda upheld President Duterte’s authority to issue Proclamation No. 572 and ordered the arrest of Trillanes.

Alameda’s decision has put the Makati RTC in what the IBP called last year an “anomalous situation” where one court upheld the amnesty and the other ruled to void it.

“We stand by our earlier opinion that the earlier dismissal of the criminal charges versus Senator Trillanes on the ground of amnesty has long become final and executory. Hence, they may no longer be revived or reopened without violating the constitutional prohibition against double jeopardy. No person can be held to answer twice for the same offense,” IBP president Abdiel Fajardo said in a statement on Tuesday.

Fajardo said Alameda should have upheld the principle of separation of powers by rejecting outright the executive branch’s motion for the reopening of the case.

“With due respect to the trial court, it has the power to resist the actions of the executive branch, especially when they would appear to be in derogation of judicial power. This is in consonance with the doctrine of separation of powers,” Fajardo said.

Reynaldo Robles, a lawyer for Trillanes, said the senator’s camp had yet to get a copy of Alameda’s ruling, but “we will consider the possibility of appealing or questioning the ruling before the higher courts.”

Trillanes is out of the country on speaking engagements. He is traveling with Alameda’s permission. —REPORTS FROM JEROME ANING, LEILA B. SALAVERRIA, CHRISTINE O. AVENDAÑO AND DEXTER CABALZA