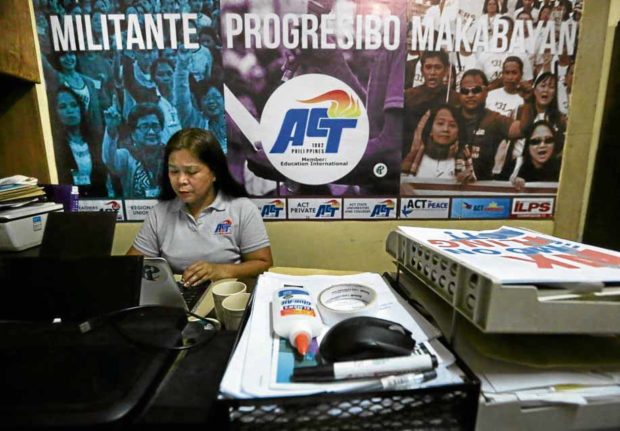 UNDER SURVEILLANCE Work at the Alliance of Concerned Teachers’ main office in Quezon City goes on in spite of police surveillance of its members in public and private schools. —LYN RILLON

Police profiling of members of the Alliance of Concerned Teachers (ACT) is part of a government witch hunt, both the Philippine National Police and the teachers’ group said on Tuesday.

PNP Director General Oscar Albayalde said police efforts to identify ACT members on the faculty of schools were part of the campaign to end the communist insurgency.

“The government would like to finish the internal security problems, particularly the problem on the Communist Party of the Philippines (CPP)-New People’s Army (NPA)-National Democratic Front of the Philippines, by the end of the President’s term,” Albayalde said at a news conference.

“We are not saying ACT is an enemy of the state. We are pinpointing here individuals, not the organization, that’s why we are [gathering intelligence],” he added.

ACT, a government-accredited teachers’ union, has some 200,000 members nationwide.

Its members come from primary and secondary public schools, while its chapters ACT Private and ACT-SUC have members from private schools and state universities and colleges, respectively.

ACT Teachers Rep. Antonio Tinio said the PNP order to place ACT members under surveillance may have come from President Rodrigo Duterte himself.

Speaking at a news briefing, Tinio pointed out that the President previously directed government forces to hunt down the supposed “legal fronts” of the CPP after its peace negotiations with the government fizzled out.

“Ultimately, the order originated from President Duterte. It came from him as Commander in Chief,” Tinio told reporters.

“He himself said he wanted to destroy the Left and its front groups. Those were his own words,” the lawmaker said.

“Profiling is just the first step. The police may later use the list to physically harm our members,” he added.

ACT is allied with Bagong Alyansang Makabayan, which has long been accused as a CPP front organization by the military, and a member of the Makabayan bloc of party-list groups in the House of Representatives.

The Makabayan bloc started to be critical of the President after he sacked several of its leaders who briefly served in his Cabinet.

Exiled CPP founder Jose Maria Sison said the President and the PNP were engaged in a witch hunt because of their failure to defeat the NPA, the CPP’s armed wing.

“The Duterte regime and its military and [the] police utterly failed to destroy the New People’s Army before the end of 2018 as they boasted,” Sison said in a statement on Tuesday.

“But [they think] they can make up for their failure by unleashing an anticommunist witch hunt against teachers, lawyers, journalists, youth, women, social activists, human rights advocates, religious and other people whom they consider open prey for state terrorism,” he added.

Schools in Calabarzon have received letters and visits by the PNP looking for ACT members.

A police officer in Angono, Rizal, said the visits were part of the PNP community engagement and collaboration.

“There was no malice at all in that letter,” said SPO1 Ray Allego, spokesperson for the Angono police.

He said the PNP was not singling out ACT even as the letter, signed by the chief of police, Supt. Glenn Magsino, specifically mentioned the group.

In a copy of the letter dated Jan. 7, the Angono police “requested” Angono National High School to give a “list of names of faculty who are members of (ACT).”

The Angono police said it was for the PNP’s “crime prevention and crime solution [and that] without the support of the community, the police can only do so much in maintaining police peace and order and public safety.”

Tinio said ACT would file appropriate charges in the Office of the Ombudsman against the PNP.

“ACT will be taking legal action. It’s clear that the teachers’ basic rights, including the right to privacy, have been violated,” he said.

“Is it a crime to fight for better benefits for teachers?” he added.

Albayalde said it would be ACT’s “right” if it wanted to file complaints against the police, “but if they can file a case, we can always file countercharges” such as for perjury.

Tinio noted that a copy of the PNP memorandum showed that the profiling of public school teachers was related to the elections in May.

“As far as we’re concerned, this is a blatant partisan intervention by the PNP in the elections,” he said. —WITH REPORTS FROM DELFIN T. MALLARI JR. AND MART SAMBALUD