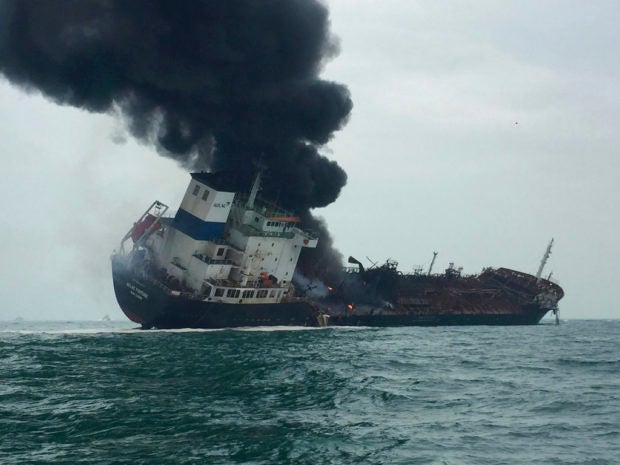 In this photo released by Hong Kong Police, dense, black smoke billows from an oil and chemical tanker after catching fire off the south of Lamma island of Hong Kong on Jan. 8, 2019. AP

HONG KONG — An explosion on an oil tanker in Hong Kong on Tuesday killed one crew member and left two others missing at sea, fire officials said.

The Vietnam-registered tanker burst into flames just before 11:30 a.m. as it prepared to refuel at an anchorage off the city’s southern coast, authorities said.

The force of the blast left the 140-meter-long tanker at an angle and threw its 25-member crew into the water, they said at a news conference. The refueling barge was destroyed.

One crew member was pronounced dead at the scene and seven others were injured.

The source of the blaze appeared to be the cargo hold, the fire officials said. The vessel, en route to its home port in Thailand, was largely empty.

A search was underway for the missing. /ee