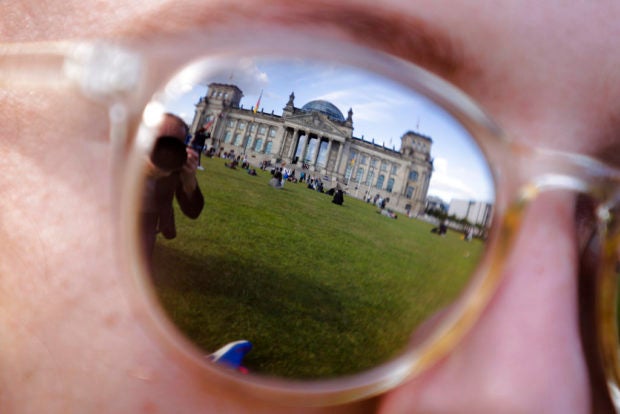 The Sept. 22, 2017 file photo shows the Reichstag building, which host the German parliament Bundestag as it is reflected in the sunglasses of a woman in Berlin.  AP

BERLIN — German authorities said Tuesday they have detained a man in a suspected hacking case that resulted in hundreds of politicians’ and celebrities’ private information being posted online.

The Federal Criminal Police Office said investigators searched the apartment of a 20-year-suspect from central Hesse state on Sunday and arrested him.

It didn’t give further details, but a news conference by the police office and Frankfurt prosecutors was planned later in the day. German news agency dpa, citing unidentified security sources, reported that the suspect had confessed.

Authorities have said that almost 1,000 people were affected by the data breach. In most cases, the information made public was limited to basic contact details, but in up to 60 cases more extensive personal data was published.

The information appeared to include data on members of all parties in parliament except those from the far-right Alternative for Germany party.

Questions have been raised about the way the data breach was handled by Germany’s IT security agency, after it emerged that it was made aware weeks before the mass publication on Jan. 3.

The data were first posted before Christmas via a Twitter account that was taken offline on Friday.

The IT security agency has acknowledged that it was approached by one lawmaker about suspicious activity on his private email and social media accounts in early December, but said it believed at the time his experience was a one-off case. /ee