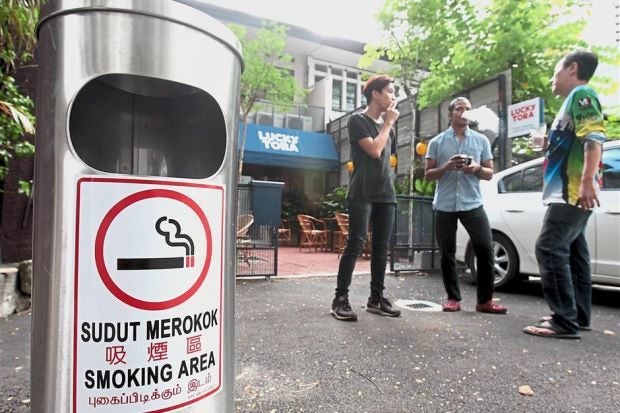 Segregated: Customers having a puff with their drinks outside the Lucky Tora bar in Bukit Bintang. The Star/Asia News Network

PETALING JAYA — After a long day at work, Tan Kin Wai loves to unwind in his neighborhood bar with a pint of stout – and cigarette in hand.

As many others would say, he said this helped him “de-stress”.

But he has not had much reason to visit the bar with the no-smoking ban in place from Jan 1.

“I don’t see why I should go out for a drink anymore. I might as well stay at home and drink because I can smoke as well,” said Tan, 26.

“I spend less time and money at restaurants,” she said.

One week after the no-smoking ban was implemented, mamak restaurants, bar and coffeeshop ow­ners are reporting less business.

According to Alex A, customers at his Feeka cafe in Bukit Bintang are even ordering less coffee.

“Instead of two cups, they now order just one. More people rather take away their coffee because they can smoke outside.

“Coffee and cigarettes are like apple pie and ice-cream, they go well together. Customers who enjoy it find that their time to sit down and relax is gone,” he said.

Alex, who also owns the Lucky Tora Restaurant & Bar in Bukit Bintang, said his customers were developing a new habit of carrying their drinks out of the shop to smoke.

“We have a lot of family and children at the restaurant, so now there is a more conducive environment for them,” Cheong said.

According to the Control of Toba­cco Product (Amendment) Regu­­la­tions 2018, the no-smoking ban is applicable to an “eating place”.

This meant “any premise whether inside or outside a building, where food is prepared, served or sold”, including areas on a ship, train, and its surrounding area within a 3m-radius from any table or chair used in the premises.

The ban covers establishments with business licenses that are registered as “restaurants”, “eating-­houses” and such.

Entertainment outlets like pubs, discos, nightclubs and casinos are exempted from the ban, according to Section 11 of the Control of Tobacco Product Regulations of 2004.