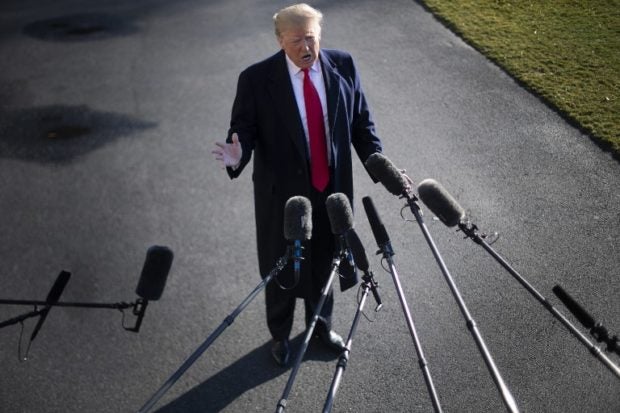 US President Donald Trump speaks to the press as he departs the White House in Washington, DC, on January 6, 2019, for meetings at Camp David. (Photo by Jim WATSON / AFP)

WASHINGTON — President Donald Trump pushed Monday for a climax in his fight over a controversial US-Mexico border wall, announcing a primetime speech and a visit to the frontier.

Trump’s plans for a national address at 9:00 pm Tuesday and a trip to the actual border Thursday raise the stakes in the row with congressional Democrats refusing to fund his wall project.

The events — giving Trump the national stage against two very different backdrops — give him a chance to try to seize the narrative.

They also follow his threats to bypass Congress by invoking emergency powers to order wall construction.

Those powers would in theory allow Trump to seek alternative funding for the wall and possibly free him to reopen parts of the federal government shut down as part of his row with Congress.

However, opponents would almost certainly accuse him of presidential overreach and respond with court challenges.

So far, the White House has given no heads up regarding the details of Trump’s message.

Trump simply tweeted that his address from the Oval Office on Tuesday will cover “the Humanitarian and National Security crisis on our Southern Border.”

Thursday’s trip, his spokeswoman Sarah Sanders said, will be to “the frontlines of the national security and humanitarian crisis.” The exact destination was not made public.

Jerry Nadler, a Democrat in the House of Representatives, scornfully predicted: “I expect the president to lie to the American people.”

Trump has made building a wall the central theme of his nationalist domestic policies.

He paints the Mexico border as an open gate for criminals, including rapists, terrorists, people with dangerous diseases and phony asylum seekers.

The border has indeed for years seen significant numbers of illegal immigrants and a thriving drug trade. However, fact checkers have debunked the more hair-raising claims, including regarding terrorist threats.

Most recently, Sanders claimed on Sunday in an interview on the usually Trump-friendly Fox News channel that “nearly 4,000 known or suspected terrorists come into our country illegally.”

However, the interviewer immediately called her out, citing the government’s own information that none of those individuals arrived across the southern border.

Democrats, who won control of the House of Representatives in midterm legislative elections, say Trump overblows the “crisis” and call the wall a political stunt not worth taxpayer money.

In retaliation, Trump has refused to sign a wider spending package — leaving sections of the federal government without funding and hundreds of thousands of employees facing delays in their paychecks.

Who will blink first?

Trump has often boasted of his tough negotiating skills as a real estate businessman, and he appears to relish the standoff, insisting he will deprive the government of full funding for as long as it takes to force the Democrats’ hand — “even years.”

Invoking emergency powers would potentially be an alternative, allowing him to get around Congress’s control of the budget. But that would pump up the political heat even further, given disagreement over the scope of a president’s right to use the measure.

Further stoking the immigration debate is the looming race between potential Democratic candidates to win the nomination to take on Trump in 2020 presidential elections.

The increasingly emboldened party is in no mood to grant Trump any kind of victory on the divisive issue.