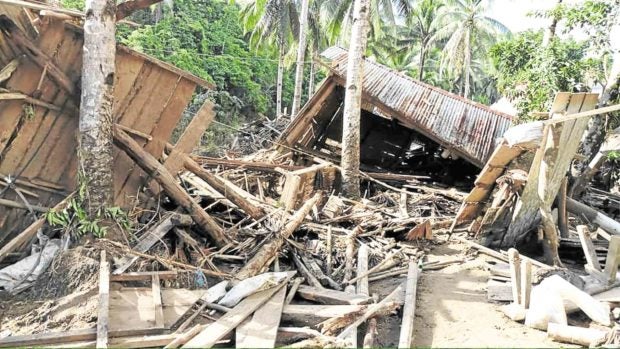 HOMELESS Families in the village of Cag-anahaw in Calbayog City are homeless after floods, which they blame on illegal logging, destroyed their houses as Tropical Depression “Usman” crossed the Visayas. —ELEEN LIM / CONTRIBUTOR

At least 87 houses were swept away by floods at Barangay Cag-anahaw, which could only be reached by three-hour walk from nearby Barangay Tarabucan.

“This was the first time this happened in our village. We really did not expect this,” said Letecia Garalza, a teacher in Cag-anahaw, adding that illegal logging in the area was the culprit.

“We are asking for help to rebuild our houses. What we need right now are materials for the construction of our houses,” she said.

The City Disaster Risk Reduction and Management Office said at least five people died at the height of Usman, four of them were from Cag-anahaw while another was from Barangay Cabatuan.

Samar Rep. Edgar Mary Sarmiento asked residents of Cag-anahaw to file a formal complaint against those whom they suspected to be behind illegal logging in their village.

“I also ask the village officials to man up and perform your functions, your duties in protecting your barangay against illegal activities,” he said.

Sarmiento said his office had asked the Department of Environment and Natural Resources (DENR) to look into reports of illegal logging in the village.

The Department of Public Works and Highways (DPWH) in Eastern Visayas said several major roads in Samar (formerly Western Samar), Eastern Samar and Northern Samar provinces were damaged due to landslides and floods.

Samar sustained the most damage to infrastructure with the total amount estimated at P27.5 million, the DPWH said.

Heavily damaged were the Calbayog diversion road, the roads that connect Calbayog to Allen town, and another road that links Calbayog to Catarman town, all in Northern Samar.

In Camarines Sur province, disaster response officials were studying the declaration of a village in Buhi town as a “no-build zone” following the devastation from Usman.

On Sunday, police reported that 11 residents of Ipil, all members of the indigenous peoples group Mt. Iraya Agta, died in a landslide that hit Sitio Mabuyod.

Carmelita Marquez, Buhi disaster risk reduction and management office chief, said the death toll in Buhi rose to 22, most of them tribe members.

Buhi Mayor Margarita Aguinillo said a team of geologists from the Mines and Geosciences Bureau (MGB) were studying whether to declare Ipil a no-build zone after cracks were discovered on a mountain slope in the village following heavy rains that triggered landslides.

“With this dangerous situation, we need the recommendation of the MGB whether to relocate close to 369 families,” Marquez said.

In Manila, Agriculture Secretary Emmanuel Piñol said the government was expecting agricultural losses from Usman to breach the P1-billion mark.

Piñol, however, assured farmers that the Department of Agriculture (DA) was ready to assist those who were affected by the calamity.

Piñol said that aside from the loan programs of the agency, the DA’s P1-billion quick response fund could be used to rehabilitate areas hit by floods and landslides.

He said P200 million would be used to repair irrigation canals and facilities.

“We have also committed P175 million in easy access credit in the [affected] provinces since last week,” Piñol added. —WITH REPORTS FROM MAR ARGUELLES, REY ANTHONY OSTRIA AND KARL OCAMPO