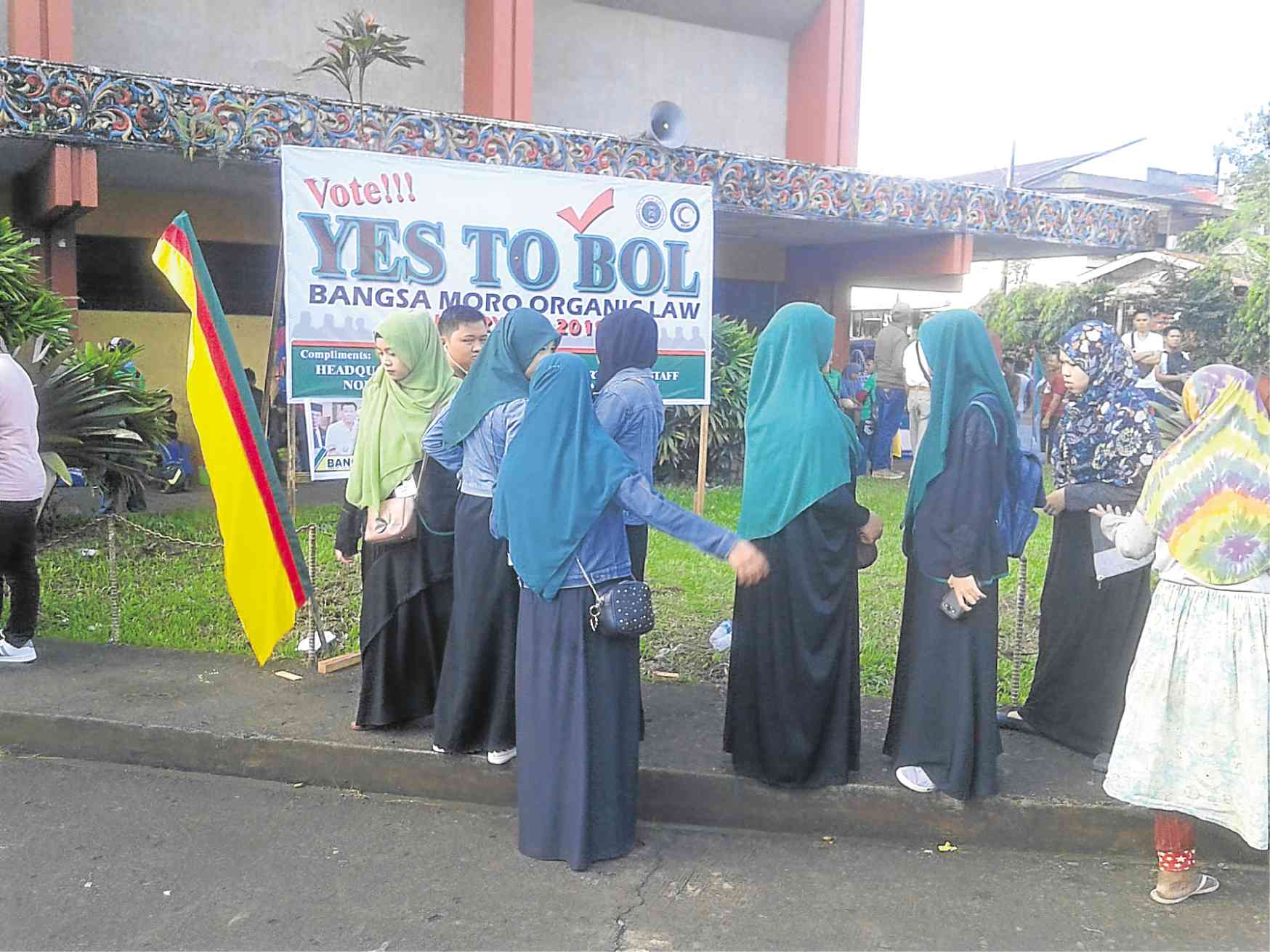 BANGSAMORO FUTURE A group of Maranao women awaits the arrival of Moro Islamic Liberation Front Chair Murad Ebrahim in Marawi City for a forum on the Bangsamoro Organic Law, a measure that will chart the future of Muslim Mindanao. —RICHEL V. UMEL

COTABATO CITY—Of the 45 villages in North Cotabato province that opted to take part in the Bangsamoro Organic Law (BOL) plebiscite, only 20 had been allowed by the Commission on Elections (Comelec) to join the exercise on Feb. 6.

Taher Guiambangan Solaiman, chair of the North Cotabato Composite Team of Civil Society Organizations (NCCT-CSO), said the poll body approved the petitions of 20 local governments in the province to participate in the plebiscite to ratify Republic Act No. 11054, or the BOL.

In a resolution issued on Dec. 20, the Comelec found the 20 villages to have complied with the requirements and established that their territories are contiguous to that of the local governments covered by the BOL.

Solaiman said 45 approved barangay resolutions and petitions seeking inclusion in the new political entity had been sent to the Comelec. The petitioners were local government officials and residents.

“So far, not a single resolution/petition for voluntary inclusion from the municipalities of Midsayap, Kabacan and Matalam was granted,” Solaiman said.

Solaiman said the status of petitions filed by other villages remained unknown. “Those not included in the list are either denied or are still subject to hearings by the Comelec,” he said.

Residents in five provinces of the Autonomous Region in Muslim Mindanao and the cities of Cotabato and Isabela will vote on Jan. 21 while those in six towns in Lanao del Norte province, 39 villages in North Cotabato and other local governments, whose petitions for inclusion were approved, will vote on Feb. 6.

The fate of the towns and villages identified in the BOL to form part of the new political entity will depend not only on voters in these areas but also on voters in their mother units.

In the case of Lanao del Norte, voters in the towns of Balo-i, Munai, Nunungan, Pantar, Tagoloan and Tangkal will vote on Feb. 6.

However, voters in 16 other towns of Lanao del Norte will also be asked if they will agree that the six towns should form part of the Bangsamoro Autonomous Region in Muslim Mindanao (BARMM).

The same applies to North Cotabato where voters in Aleosan, Carmen, Kabacan, Midsayap, Pikit and Pigcawayan will be asked if they will vote to include 39 villages and other local governments that have petitioned for inclusion in the BARMM.

If voters in 39 villages approve inclusion, they will be included in the BARMM only if majority of voters in six North Cotabato towns also agree.

Read Next
Bosses to cop beaten up by Garins: Take precautions
EDITORS' PICK
Water remains our saving grace right now
Digital hunt for Hyun Bin: 5 challenges for Smartees
Motostrada expands by handing over ‘Trident’ and adding new ‘Horseman’ to its growing business
WHO: Indoor airborne spread of coronavirus possible
No arrests to be made on 1st day of allowed pillion riding for couples — HPG
House panel set to meet for possible decision on ABS-CBN franchise bid
MOST READ
‘I will always speak up for you’: Server on defending Fil-Am family from racist rant
‘Nouveau’: Agot Isidro hits Jinkee Pacquaio’s show of luxury Hermes, Louis Vuitton bikes
Alfred Vargas inhibits from voting on ABS-CBN franchise renewal
Solon withdraws support for ABS-CBN franchise renewal
Don't miss out on the latest news and information.