A tide of #MeToo testimonies about painful gynecological procedures and abusive medical staff is rippling across the Balkans, where women are breaking taboos in patriarchal societies to share their traumatic hospital experiences. 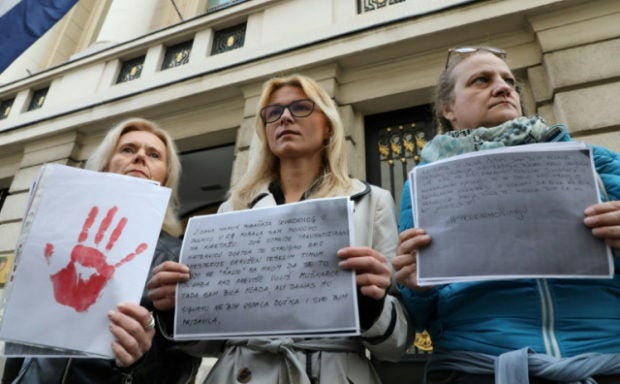 In Croatia, the parental advocacy group RODA has gathered around 400 written statements from women about painful and humiliating experiences during gynecological procedures. Image: AFP

The outcry was sparked by one female politician’s emotional account of an agonizing treatment she received after a miscarriage, shocking many in a region where sexual health is rarely discussed in the public sphere.

“They tied my arms and legs and started a curettage without anesthesia… these were the 30 most horrible minutes of my life,” Croatian MP Ivana Nincevic-Lesandric told a male-dominated parliament in October.

“I could tell you about every second as each was lasting an eternity,” she said, of the surgery that involves scraping tissue from the uterus and is often performed after a miscarriage or abortion.

“Do you plan to change this and when?” she challenged Health Minister Milan Kujundzic.

Arguing that “this is not how Croatian hospitals proceed,” the minister pledged to investigate the case, while the hospital where she was treated rejected her claims.

But Croatian women came to her defense, with hundreds offering testimonies of similarly painful and humiliating experiences during gynecological procedures.

“You did not cry when you had sex, so shut up,” one woman recalled a doctor telling her during a biopsy when she was whimpering in pain.

“They held me by my hands, legs and head, and the doctor said I was spoiled for crying,” wrote another, who said she was denied an anesthetic during a curettage after a miscarriage.

No option to decide

Those testimonies were collected by the parental advocacy group RODA, together with around 400 other written statements from women in Croatia.

The stories were read aloud publicly in several towns by activists and handed over to the health ministry, which said the number of women was “relatively small.”

It nevertheless admitted there were “differences” in how anaesthesiology services were provided in hospitals and that there was a need to “improve communication” between medical staff and patients.

“Women are not given an option to decide what will be done to them, and they are not informed properly about procedures or medications, which is a sort of violence,” said Daniela Drandic, of RODA, which launched a “Break the Silence” campaign for the first time in 2014.

The testimony of the MP Nincevic-Lesandric marked a turning point as it pushed the issue onto a national stage.

“A woman said it in the parliament where such things are not expected. Our women politicians do not talk about reproductive health in such a way,” Drandic said.

Activists say women in the region have faced abusive medical treatment for decades and that globally, women’s pain is often perceived differently from men’s.

In Croatia, a recent survey showed that one-third of women underwent gynecological interventions such as miscarriage curettages, biopsies, and other IVF treatments without anesthesia.

The outcry in Croatia inspired a wave of similar grievances across the region.

In neighboring Bosnia, the Natural Birth NGO received more than 300 testimonies from women on painful gynecological procedures in just 10 days.

She likened the regional response to a Balkan version of the #MeToo movement, a U.S.-turned-global campaign launched in response to accusations of sexual abuse and harassment by powerful men in the entertainment industry and other sectors.

That original #MeToo campaign has yet to make any significant waves in the Balkans, where a strongly patriarchal culture endures.

“We are shining a light to everything that is happening behind closed doors… it has been lasting for generations and it must be changed swiftly,” said Cerimagic.

A 2015 survey showed that 10 percent of Serbian women “do not want to have another child ever due to a traumatic hospital experience with the first child,” she said.

More than 60 percent of those surveyed said they did not feel protected at childbirth, with many women saying they are not kept in the loop about what doctors are doing to their bodies.

“Women are treated like they do not exist,” Ruzicic said.

In Zagreb, Nincevic-Lesandric said she did not expect such a strong response to her testimony.

“Women have managed, unfortunately due to traumatic experience, to raise awareness of the problem to the level that every woman knows her rights and what should not happen to her,” she told AFP. NVG