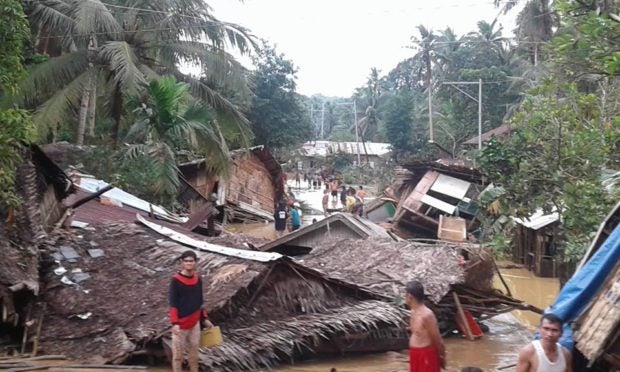 Residents of Lope de Vega, Northern Samar  who have returned to their villages are trying to salvage whatever is left after floods hit the town after the onslaught of Tropical Depression “Usman.”

TACLOBAN CITY — It was like the New Year never happened in the typhoon-ravaged Lope de Vega town in Northern Samar, which bore the brunt of Tropical Depression “Usman.”

For Rodolfo Francisco, all he wanted was to rebuild his house in Barangay Sampaguita, which was destroyed by floods and strong winds spawned by Usman.

On New Year’s Eve, Francisco was among the hundreds of typhoon survivors who trooped to the town’s municipal hall to receive food aid from the provincial government.

“I don’t think about it (New Year’s Day). All I think now is how I can rebuild whatever is left of our house which has been destroyed by the typhoon,” said Francisco,54, a farmer.

He said all the houses in Barangay Sampaguita, about 7 kilometers from the town proper, were either destroyed or damaged by Usman.

Records from the Municipal Disaster Risk Reduction Management Council (MDRRMC) showed that in Sampaguita, a small remote village populated by 143 residents, 16 houses were destroyed while 14 others were damaged.

At least 3,930 families or over 14,700 individuals were affected by floods and landslide that rendered the town isolated. Flood water reached up to two storeys high.

Five people were reported dead during the onslaught of Usman in Lope de Vega.

Mayor Ana Palloc of Lope de Vega echoed the sentiments of Francisco, saying the holiday mood was taken over by overwhelming sadness that swept across town.

“We are all sad. We could not celebrate the New Year here because of the extent of damage that we have suffered. The town was practically dead silent (during the New Year),” Palloc said.

As of Jan. 1, the town remained without power.

She said that while the road going to the provincial capital of Catarman, about 28 kilometers away, had been opened, only light vehicles and single motorcycles could pass, affecting the distribution of food aid to the town.

“[It’s a] good thing [that] (Northern Samar) Governor Jose Ong was able to ask help from our military which provided their helicopter to help in the distribution of food packs for my people,” the town mayor said.

Palloc said that while flood water had receded, about 25 families over 100 individuals were still staying at a public school and a church, which served as evacuation centers.

“The families who have returned to their barangays are now doing some cleaning and trying to rebuild their damaged or destroyed houses,” she said.

“We try to make do of the situation. We still managed to celebrate the New Year though with sadness. We shared simple foods consisting of chicken, pancit (stir-fry noodles) and soda,” he said.

“We are still grateful that we survived,” he said.

Abendan was with his wife and two-year-old daughter along with some policemen when floods reached the second floor of the police station.

The police chief said  the people of Lope de Vega were in immediate need of food, medicine, and clothing.

“Practically, all the barangays of the town were hit by flood except for the villages of Roxas and Magsaysay, which are located on higher grounds,” Abendan said.

The town has 22 barangays.

Mayor Palloc said that despite  the bleak situation, she urged her constituents not to give up.

“Don’t lose hope. We can survive this disaster. Let’s help each other,” she said.

The town mayor said they had yet to have a final report on the value of damage to private properties and the agriculture sector.

“But I guess, it could reach to more than P20 million,” she said.

Lope de Vega is a fourth-class town which has an annual income of just over P40 million.

A state of calamity would be declared by the municipal government on Wednesday, Palloc said. /ee