Malacañang has another stay-in smoker 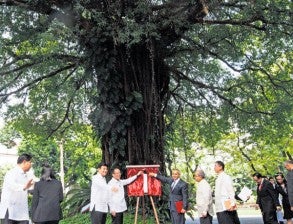 MANILA, Philippines—Aside from the President, there’s another untouchable “smoker” in Malacañang—and he’s definitely there to stay.

President Benigno Aquino III on Monday declared an ancient “balete” —one that looms in front of Malacañang and fabled to be home to a “kapre”—as a “heritage tree,” meaning caretakers will, from now on, look after it with official help from the government.

Believed to be more than a century old, the tree had spun stories of its own like any Palace old-timer, primarily as the haunt of a certain “Mr. Brown,” the resident kapre, an elemental being depicted in Philippine mythology as a tree-dwelling, cigar-puffing ogre.

Much of what the President knows about Mr. Brown has come from his chief protocol officer Miguel Perez-Rubio, who also served in the same capacity during the administration of the President’s mother, the late Cory Aquino.

Present at Monday’s program held near the balete tree, Rubio said that he, in turn, learned about the tree’s origins from a retired gardener who tended the Palace grounds in the 1930s, during the presidency of Manuel Quezon.

“A bird flew by Malacañang during the time of the American governor general and probably dropped a seed and it fell right there where an older tree stood. A balete (sapling) grew and eventually strangled that tree,” Rubio said, sharing the gardener’s tale.

He said the gardener also told him about “Mr. Brown” and how this kapre got such a name after he “decided to use this tree as his house (during the) American times”—or back when Uncle Sam colonized a “brown” race.

“And so he settled and still lives there. Some people say that at night, they see this kapre, and like all kapre he’s a giant. Very, very big,” Rubio said.

But by accounts, “Mr. Brown” has turned out to be a “good” chap, albeit one who could be “very mischievous,” especially if passersby forget to extend him a greeting, the protocol officer said.

“Maybe you’ll get tripped by a cable from a TV camera. Maybe you fall or something,” he said.

Hence, when serving in the Cory Aquino years and again under the incumbent President Aquino, Rubio said he always made it a point to greet Mr. Brown.

“So far, I’ve been very lucky. Nothing bad has happened to me,” he said. “I guess if I’m walking there and you happen to hear me say ‘Hi! Mr. Brown,’ hey, you might say I’m very superstitious. But still, sometimes it’s good to take precautions.”

Mr. Aquino made the declaration at the launch of the United Nations Decade on Biodiversity and the International Year of Forests in Southeast Asia.

“In making it a heritage tree, it will constantly remind us of our obligations, both as citizens of this country and as stewards of this planet,” he said, before unveiling a marker at the ancient balete.

The President also signed a proclamation declaring the years 2011 to 2020 as National Decade on Biodiversity in the Philippines.

To be declared a heritage tree, the tree has to be deemed healthy, native or endemic, exotic, rare, threatened and endangered—with a minimum girth of 100 centimeters.

Under the Heritage Tree program of the Department of Environment and Natural Resources, the tree will be allotted a five-meter protection zone around it and its caretakers will be given technical assistance.

Speaking to reporters later, the President said, “I haven’t seen any Mr. Brown or Mr. Black or Mr. White here.”

“I’ve heard so many stories here, but I have yet to experience them myself,” he added.