2018: A giant leap for Filipino womankind 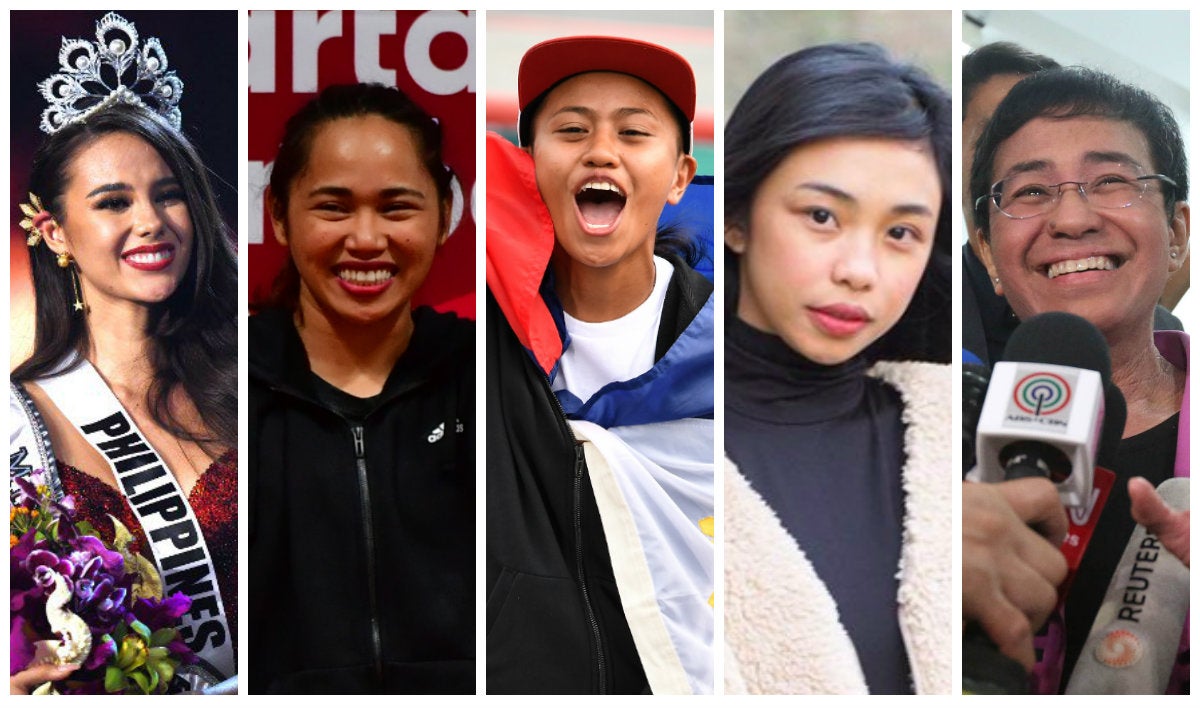 MANILA, Philippines — The year 2018 was filled with remarkable achievements in many different forms as outstanding women stamped their marks on the international stage.

This year saw the Philippines soared in the world of sports, as many of the country’s female athletes brought home not only medals to their motherland but took along with them a sense of pride.

Filipina weightlifter Hidilyn Diaz gave pride to the country after she clinched the Philippines’ first ever gold medal 2018 Asian Games held in Jakarta, Indonesia during the women’s weightlifting event.

Diaz, who hails from Zamboanga City, bested other competitors in the women’s weightlifting 53-kg event.

The 27-year-old athlete bested other weightlifters from Turkmenistan and Thailand after lifting a total of 207 kilograms.

Aside from being an athlete, Diaz is also an officer from the Philippine Air Force where she was recently promoted from the rank of Airwoman First Class to Sergeant.

Before winning the gold medal, Diaz also won a silver medal for the Philippines in the Summer 2016 Olympics in Brazil.

Another gold medalist, Margielyn Didal dominated the women’s street skateboarding competition in the 2018 Asian Games held in Palembang in Indonesia.

The Cebuana finished with an average mark of 30.4 points, 5.4 higher than silver medalist Isa Kaya of Japan who had 25.

The 19-year-old was also the only Filipino who claimed a spot in Time Magazine’s “25 Most Influential Teens of 2018.”

Reaching for greater heights, mountaineer Carina Dayondon was the first Filipina to complete the “Seven Summits” climb as she was able to conquer the seven highest peaks in seven continents.

Dayondon already made history in 2007 as she and two other women were the first Filipinas to reach the world’s highest peak, Mount Everest.

From the women who competed with their game faces on to bring honor to the Philippines in the field of sports, another one fought for the truth and the freedom of the press and was recognized internationally for doing so.

Yearly, Time Magazine recognizes personalities as its Person of the Year and in 2018, Filipino veteran journalist Maria Ressa bagged the prestigious recognition together with other journalists who have made a significant mark in the industry.

Aside from Ressa, the magazine also chose slain Saudi journalist Jamal Khashoggi, jailed Burmese journalists Wa Lone and Kyaw Soe Oo of Reuters and the staff of the Capital Gazette in Annapolis, Maryland, which lost five of its staff in an attack last June.

Time Magazine recognized the journalists as its 2018 Person of the Year in what it said was an effort to emphasize the importance of reporters’ work in an increasingly hostile world.

Amid this, Ressa, who co-founded the online news site Rappler, faced tax evasion cases filed by the Department of Justice against her and the company.

However, Ressa has maintained that the cases have no basis.

READ: Ressa returns to Manila, confirms arrest warrant against her

“I’m personally under attack. Rappler as a company is under attack. I think we all know that the line has been moved,” she added.

The year 2018 also witnessed how Catriona Gray brought the prestigious Miss Universe crown back to the Philippines. Other amazing ladies also made history in the realms of fashion and theater.

Taking on the world, the universe rather, Catriona Gray gave Filipinos an early Christmas present as she bagged the Philippines’ fourth Miss Universe crown at the coveted international pageant held in Bangkok, Thailand last December 17.

The 24-year-old beauty queen bested 93 other candidates from around the globe as she graced the pageant stage showcasing the Philippines from head to toe, from mind to heart.

Proud to be Pinay, Kelsey Merritt became the first Filipino to walk in the most glamorous fashion show in the world, the Victoria’s Secret Fashion Show, which was held in New York last November 8.

READ: Like a dream for 1st Pinay in Victoria’s Secret

From one runway to another, this teen actress showed that she can both shine in a television screen and on the fashion catwalk.

She was among the fashion muses of world-renowned Filipino designer Furne One.

Tony-award winning actress Lea Salonga has earned her first Grammy nomination with her work in Broadway musical “Once on this Island.”

She and the entire cast of “Once on This Island” album were nominated for the category Best Musical Theater Album where Salonga was listed as a principal soloist./ac