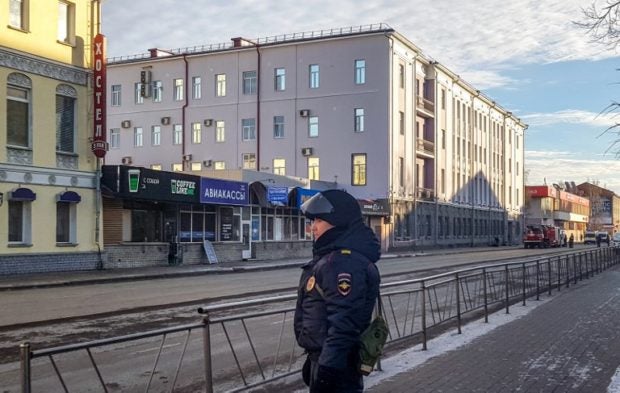 A Russian policeman patrols in a street near a building housing the FSB security service in Arkhangelsk on October 31, 2018, after an explosive device went off inside the building. AFP

MOSCOW, Russia — Three people were killed and another 79 were unaccounted for after a gas explosion rocked a residential building in Russia on Monday, leaving hundreds without a home in freezing temperatures on New Year’s Eve.

An entire section of the 12-storey residential building collapsed when a gas explosion tore through the high-rise in the industrial city of Magnitogorsk nearly 1,700 kilometres (1,050 miles) east of Moscow in the Ural mountains.

“Three people have been pulled alive from the rubble and three are dead,” Boris Dubrovsky, governor of the Chelyabinsk region where the city is located, said in a statement.

Officials said that the fate of 79 people was unclear, with police working to locate their whereabouts.

National television broadcast footage of the mangled heaps of concrete as hundreds of rescue workers combed the debris in temperatures of minus 18 Celsius (minus 0.4 F).

In a sign of the seriousness of the situation, President Vladimir Putin ordered emergencies minister Yevgeny Zinichev and health minister Veronika Skvortsova to travel to Magnitogorsk to personally oversee the rescue operation.

The Soviet-era high-rise was built in 1973 and was home to around 1,100 people. The residents have been evacuated.

A total of 110 people were registered as residents of the affected section of the building, regional authorities said.

Sixteen of them have been evacuated, and another 15 were not home at the time of the blast.

Deadly gas explosions are relatively common in Russia where much of the infrastructure dates back to the Soviet era and safety requirements are often ignored. /ee