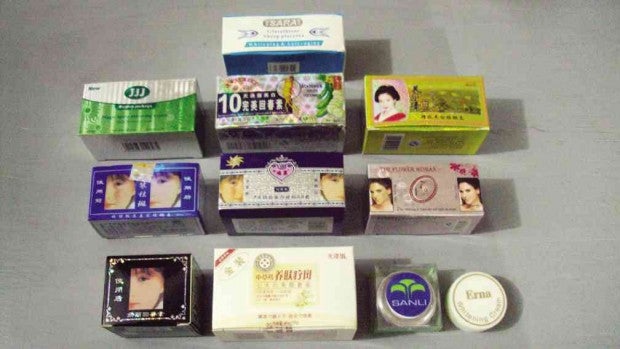 Samples of the beauty products that reportedly tested positive for high levels of mercury and that were bought in stores in Manila, Parañaque and Pasay. EcoWaste Coalition/ contributed photo

MANILA, Philippines — An environmental group called on the Department of Health (DOH) in Northern Mindanao to crackdown on the sale of skin-lightening cosmetics laden with mercury in Cagayan de Oro City (CDO).

In a letter on Saturday, the EcoWaste Coalition told the DOH in Region 10 that skin whitening products with high mercury content had been banned by the Food and Drug Administration (FDA).

“We urge your office to conduct rapid post-market surveillance in CDO and other major cities in Northern Mindanao and to prosecute the violators …, including padlocking stores caught in flagrante delicto,” Thony Dizon, Chemical Safety Campaigner of EcoWaste Coalition wrote in the letter.

According to Dizon, EcoWaste did a market investigation in CDO last week and “found several imported skin whitening cosmetics banned by the FDA openly and unashamedly being sold by retailers engaged in the sale of beauty and herbal products, as well as Chinese medicines, especially in Cogon.”

The group said it bought 18 pieces of banned Collagen Plus Vit E, Erna, JJJ, Jiaoli, S’Zitang and Xinjiaoli skin whitening creams from nine stores located in Cogon, Divisoria and Lapasan. All were illegally imported from China and Indonesia, it said.  Upon testing, all 18 products were found contaminated with mercury above the allowable limit of 1 parts per million (ppm).
The group noted that Collagen Plus Vit E had the highest concentration of mercury at 6,020 ppm.
Quoting the FDA, EcoWaste said mercury in cosmetic products could result in kidney damage, skin rashes, skin discoloration and scarring, among other harmful effects.

Chronic use of such products will also reduce the skin’s normal resistance against bacterial and fungal infections, it added.

Anxiety, depression or psychosis, and peripheral neuropathy may also be experienced by people who use mercury-tainted skin whitening cosmetics, EcoWaste said.

It may also affect the later mental development of fetuses in pregnant women, it warned.

EcoWaste noted that the Philippine government signed the Minamata Convention on Mercury in October 2013 which has set a global phase-out target by 2020 for cosmetics, including skin lightening creams and soaps, with mercury content above 1 ppm. /cbb