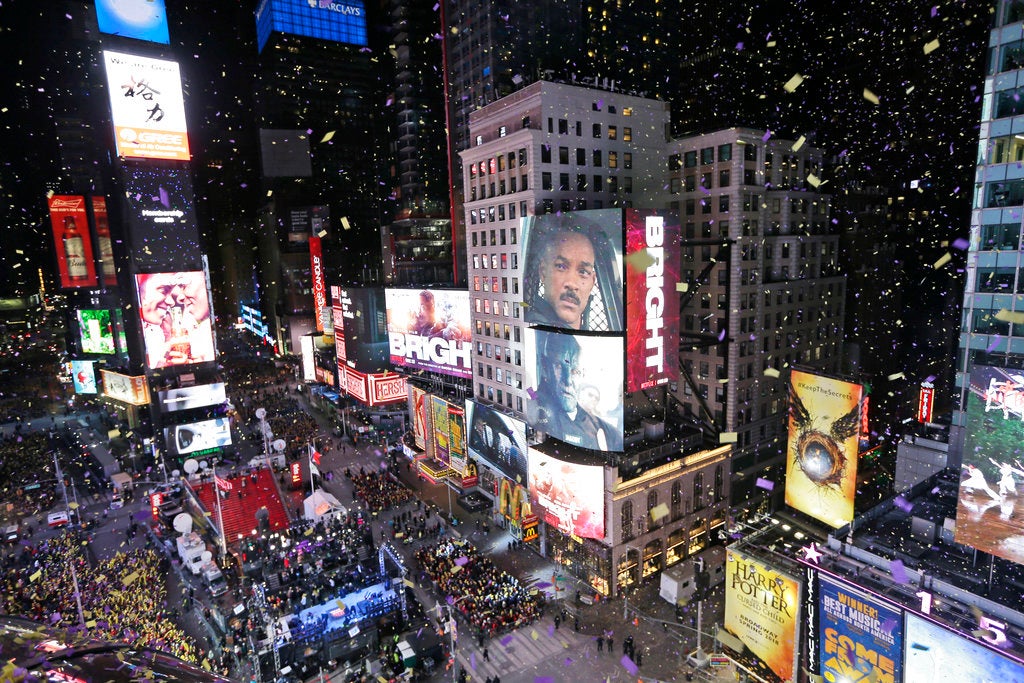 In this Jan. 1, 2018, file photo, confetti flies over Times Square during the New Year’s celebration in New York. The New York Police Department is adding a drone this year to the security forces it uses to protect the huge crowds celebrating New Year’s Eve in the city. AP FILE

NEW YORK, United States — It’s an Auld Lang Syne of the times: For the first time, a police drone will be keeping watch over the New Year’s Eve celebration in New York’s Times Square.

About 7,000 police officers will be on duty for Monday night’s festivities in Times Square, including counterterrorism teams with long guns and bomb-sniffing dogs. Police cars and sand-filled sanitation trucks will be positioned to stop vehicles from driving into the crowd.

And, above it all, a remote-controlled quadcopter will be giving police a unique view of the merriment — and any potential mayhem.

It’s the first time the NYPD is sending up a drone for a big event.

“That’s going to give us a visual aid and the flexibility of being able to move a camera to a certain spot with great rapidity through a tremendous crowd,” Deputy Commissioner of Intelligence and Counterterrorism John Miller said.

Police Commissioner James O’Neill said there are no known, credible threats to the city or the New Year’s Eve event. He encouraged spectators to remain vigilant and to alert officers if they suspect something is awry.

“There’s probably going to be a cop within 10 feet of you,” Miller said. “If you see something, you can go right to them directly.”

Mayor Bill de Blasio said Friday that the city is expecting “up to 2 million people in Times Square itself” for the ball drop, repeating a figure often cited by city officials, organizers and television broadcasters.

Crowd-size experts say it’s impossible to cram that many people into the area, a bow-tie-shaped zone running five blocks between Broadway and 7th Avenue, and that the real total is likely fewer than 100,000.

No matter how many people actually show up, they’ll all be screened with metal detectors at security checkpoints and funneled into penned off areas to prevent overcrowding.

Umbrellas, backpacks and coolers are banned, but those kitschy “2019” glasses are most definitely allowed in. And there won’t be any popping champagne at midnight. The NYPD says alcohol is strictly prohibited.

That might be for the best. There aren’t any bathrooms, and anyone leaving the secure area won’t be allowed back to their original spot. That means they’ll risk missing the ball drop or having to squint hard to see it from a faraway vantage point.

Like last year, the NYPD is embedding detectives in hotels around Times Square in an attempt to thwart a potential attack like the one in Las Vegas last year in which a gunman shooting from a hotel room killed 59 people at an outdoor country music festival.

The NYPD’s drone adds to a vast array of visual surveillance that includes more than 1,200 fixed cameras and feeds from police helicopters circling above.

Several of the NYPD’s drones are equipped with thermal-imaging and 3D-mapping capabilities and strong camera lenses that can greatly magnify a subject.

For safety, Chief of Department Terence Monahan said the New Year’s Eve drone will be tethered to a building and flown in a cordoned-off area so that no one gets hurt if it happens to fall. The drone will never fly directly above the crowd, he said.

Unlike a helicopter, a drone is small and makes little noise. Between the sounds of performers like Christina Aguilera and Bastille and the confetti that’ll be swirling at midnight, Monahan said some spectators might not even notice it.