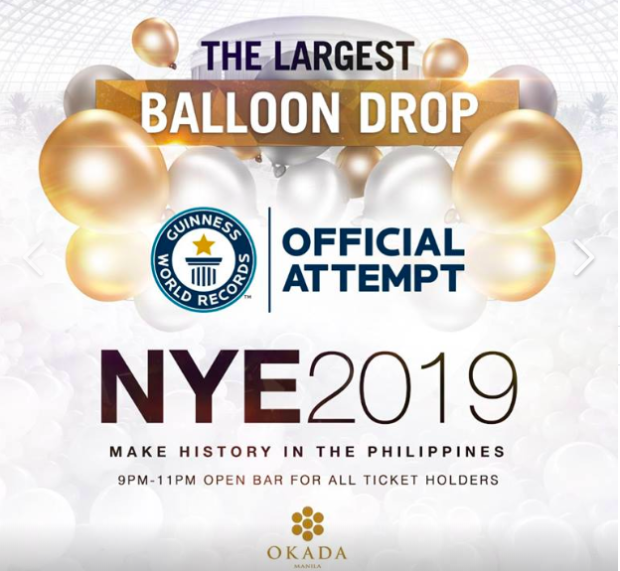 The previous announcement of Okada Manila to a world-record attempt, which has been canceled by the organizers in respect to the order of the Department of Environment and Natural Resources. IMAGE from Cove Manila FB page

MANILA, Philippines — The management of Okada Manila has decided to cancel its attempt to break the world record for the most number of balloons dropped following an order issued by the Department of Environmental and Natural Resources (DENR).

In a statement on Sunday, Okada Manila noted that after its announcement of its plan to hold a record breaking balloon dropping event at Cove Manila, “many concerns were raised from various sectors about the environmental impact of the event.”

“Okada Manila has explained to the public that the event will not harm the environment, as the event will be held indoors and the balloons will not be released in the air,” it said.

“The balloons are made of biodegradable latex materials and will be recycled properly after the event,” it added.

As part of its New Year’s Eve festivities, Okada Manila has planned to hold a record-breaking Balloon Dropping event at…

Earlier, the DENR ordered the event organizers to stop Okada Manila’s planned event for the New Year’s Eve, citing that the world-record attempt by Okada Manila, which includes dropping about 130,000 pieces of balloons in a single event will be “a solid waste disaster waiting to happen.”

“We received today a letter from the [DENR] encouraging Okada Manila to cancel the event,” Okada Manila said.

Environment Secretary Roy Cimatu said the department’s decision to halt the event came after realizing that the Cove Manila will be attempting to drop about 130,000 pieces of balloons in a single event on Dec. 31, which could be an environmental disaster waiting to happen.

“In response, Okada Manila coordinated with DENR representatives to show that everything is in place to ensure that there will be no negative environmental impact from the activity,” it added. “Okada Manila firmly believes and continues to maintain that the Balloon Dropping event will not harm the environment.”

However, Okada Manila said it “has voluntarily decided to cancel the Balloon Drop event as a sign of respect to the DENR’s recommendation and in support of the Government’s campaign to protect and save the environment.”

Okada Manila, nevertheless, advised that the New Year’s Eve Countdown Party at Cove Manila and all other festivities in Okada Manila will still proceed as scheduled and will not be affected by the cancelation of the balloon drop event.

“Imagine the amount of solid waste the event would generate when they pushed through with that event,” Undersecretary for Solid Waste Management Benny Antiporda, DENR spokesperson, said. /jpv