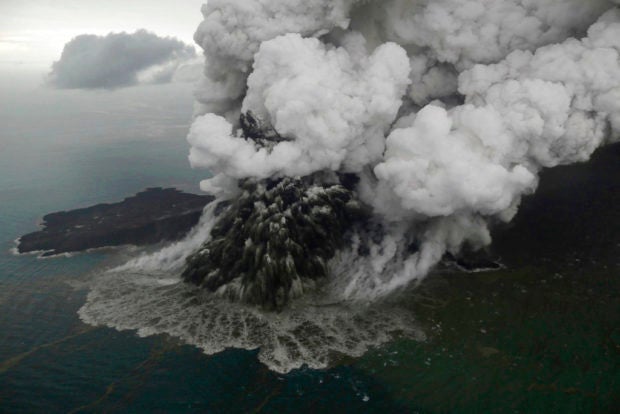 Plumes rise from Mount Anak Krakatau as it erupts in the Java Strait, Indonesia on Dec. 23, 2018.  AP

JAKARTA, Indonesia (AP) — Scientists say Indonesia’s Anak Krakatau volcano island, which erupted and collapsed a week ago triggering a deadly tsunami, is now only about a quarter of its pre-eruption size.

The analysis shows the scale of the island’s collapse, shedding light on the power of the tsunami that crashed into more than 300 kilometers of coastline in Sumatra and Java. More than 420 people died in the waves that were 2 meters or higher and 40,000 were displaced.

The center said that the crater peak was 110 meters (360 feet) high as of Friday compared with 338 meters in September.

Experts have largely relied on satellite radar images to work out what happened to the volcano because cloud cover, continuing eruptions and high seas have hampered inspections. The center said it would get more precise results from more visual inspections.

Authorities have warned residents to stay a kilometer away from the coastline of the Sunda Strait, which separates Java and Sumatra, because of the risk of another tsunami.

But experts now say another potential tsunami triggered by the volcano collapsing again would be less severe due to its reduced mass.

Anak Krakatau, which means Child of Kratakau, is the offspring of the infamous Krakatau volcano whose monumental eruption in 1883 triggered a period of global cooling. /ee