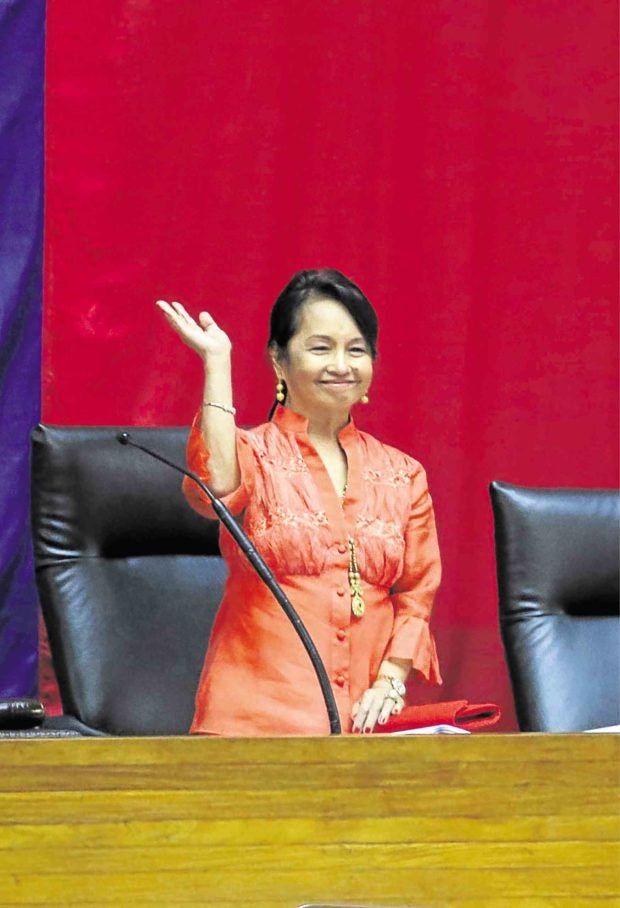 WINNING STREAK Gloria Macapagal-Arroyo emerges triumphant in a July coup at the House of Representatives. Her winning streak continued on Friday with a court exonerating her of electoral sabotage. INQUIRER PHOTO

The Pasay City Regional Trial Court (RTC) has exonerated Speaker Gloria Macapagal-Arroyo from the charge of electoral sabotage, which stemmed from accusations of ordering, when she was President, the manipulation of results of the 2007 senatorial race in Maguindanao to ensure her candidates won.

Arroyo’s lawyer, Ferdinand Topacio, confirmed to reporters that Judge Jesus Mupas, of the Pasay RTC Branch 112, granted Arroyo’s demurrer to evidence, a type of pleading in criminal cases, which seeks the acquittal of an accused based on pieces of evidence and testimony offered by government prosecutors.

Mupas, in a six-page order on Dec. 17, said the prosecution failed to “prove the guilt of accused Arroyo beyond reasonable doubt and moral certainty despite ample opportunity and even without evidence in favor of said accused.”

The judge also ordered the return of the P1-million bail posted by Arroyo in July 2012.

“The Arroyo family is grateful for the gift of justice,” Topacio said in a statement.

“Now it may be said that none of the cases filed against her by the Aquino administration have survived judicial scrutiny,” he added.

He said the former President no longer had any pending case in court.

The electoral sabotage case, from a complaint filed by Sen. Aquilino Pimentel III, was “hastily” filed in court by the Commission on Elections and Department of Justice, according to Topacio.

It was just used to stop Arroyo from leaving the country, he added.

Prosecutors charged Arroyo with conspiring to commit electoral sabotage when she allegedly instructed then Maguindanao Gov. Andal Ampatuan Sr. to ensure a 12-0 victory for her administration’s Team Unity senatorial ticket.

The judge also said the criminal information filed in court against Arroyo lacked key details like how the then President wanted Ampatuan to ensure her candidates’ victory.