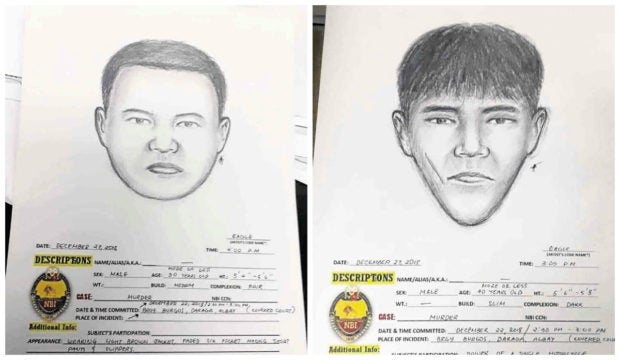 WHO ARE THEY? Police produce these sketches of two suspects in the murder of Ako Bicol Rep. Rodel Batocabe. PHOTOS FROM PNP

LEGAZPI CITY—The son of slain Ako Bicol Rep. Rodel Batocabe expressed fear that his father’s death would be just added to the growing list of crimes unsolved by police.

It has been seven days since his father and security escort SPO1 Orlando Diaz were shot dead in a gift-giving event at the remote village of Burgos in Daraga town, Albay province.

“They always say that there are persons of interest,” Justin Batocabe said at a press conference in Bicol University Daraga Campus, where his father’s wake was being held.

“I am somehow worried, but I still believe in the [justice] system,” he said.

When asked if he was in favor of carrying out the death penalty for his father’s killers, he said he wanted the assailants alive so they would know “how much the entire country hated them.”

Justin also slammed the use of fake news that his father was running as an independent candidate when, in fact, he was a candidate of the National Unity Party.

He said the family had until noon of election day to select a replacement candidate for his father.

The family has not yet announced who will replace Batocabe in the mayoral race.

Justin said he and other relatives were also in constant communication with President Duterte and former Special Assistant to the President Christopher “Bong” Go.

He said the President was ready to go back to Daraga and send people to secure the town, including those who want to help in the investigation.

Police have produced sketches of the suspects in the killing, said Chief Insp. Maria Luisa Calubaquib, spokesperson of the Bicol police.

She said based on the testimonies of witnesses, police investigators were able to form sketches that would determine the identities of the killers.

She said that parallel investigations were being conducted by the Special Investigation Task Group Batocabe and the National Bureau of Investigation.

Chief Supt. Arnel Escobal, Bicol police chief, said the regional police had also obtained photos of possible suspects from the cell phone of one of those present at the gift-giving activity led by Batocabe on Dec. 22. —REPORTS FROM MICHAEL B. JAUCIAN, REY ANTHONY OSTRIA AND MAR  ARGUELLES