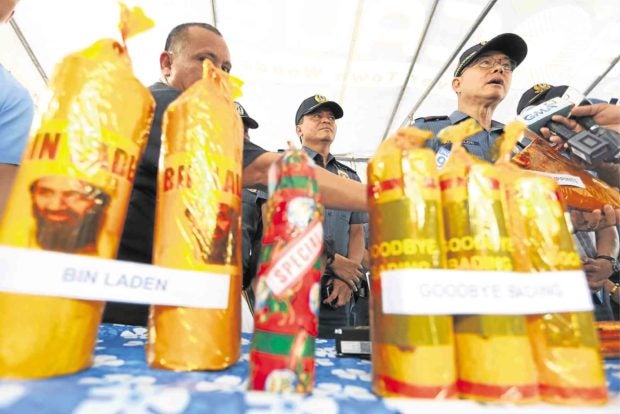 BOCAUE, BULACAN—Philippine National Police Director General Oscar Albayalde led on Friday the inspection of firecracker factories and stores in Bocaue town, known as the center of pyrotechnics trade in the country, and said he was impressed with efforts to curb fireworks-related injuries.

Albayalde said local manufacturers had complied with safety guidelines and had produced firecrackers and other pyrotechnic products that passed standards.

But he said the police would continue to monitor the sale of illegal firecrackers, which were either smuggled or produced by clandestine manufacturers. 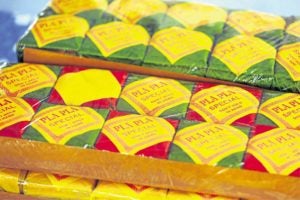 BANNED Among the firecrackers banned by the government are “piccolo,” which is popular among children, and “pla-pla.” NIÑO JESUS ORBETA

Two unlicensed factories had been shut down and their owners and operators had been charged, according to Senior Supt. Chito Bersaluna, Bulacan provincial police director.

He said policemen in plainclothes had been posted in strategic areas of the so-called pyrotechnic zone to monitor transactions.

During his visit here, Albayalde brought with him cardboard replicas of banned products like “Goodbye Philippines,” “Goodbye Bin Laden,” “Goodbye Bading,” and “pla-pla,” which had been blamed for burn injuries in the past.

He examined the wares sold by five stores at the Dinglasan compound, a designated pyrotechnic zone at Barangay Turo in Bocaue.

He said the stores had put up safety measures such as placing water drums, sandbags and fire extinguishers near their stalls.

“The statistics are getting better. We had fewer blast injuries last year, and we expect the numbers to even go further down on New Year’s eve,” he said. 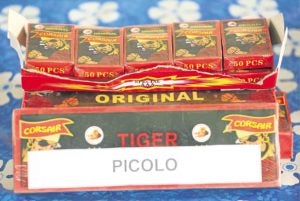 BANNED Among the firecrackers banned by the government are “piccolo,” which is popular among children, and “pla-pla.” NIÑO JESUS ORBETA

In Pampanga province, the regional office of the Department of Health (DOH) reported that five patients were treated for blast wounds on their hands, while three others were struck in their eyes by firecrackers, as the number of fireworks-related reached 11 in Central Luzon on Thursday.

The number was far lower than the 77 cases recorded as of Dec. 27 last year, Fantone said.