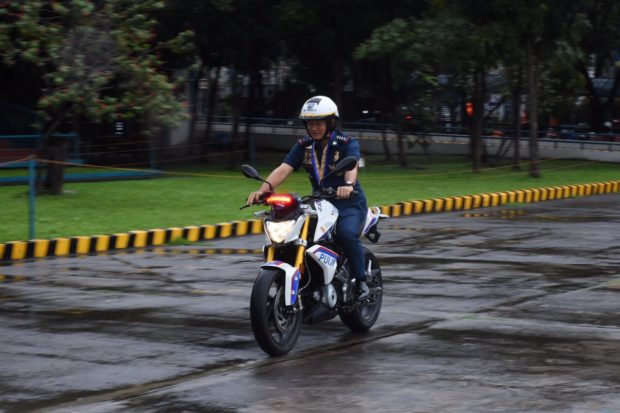 PNP Chief Director General Oscar Albayalde test-rides one of the 50 units of BMW Motorrad G 310 R donated by the San Miguel Corporation to the PNP-Highway Patrol Group on Friday, December 28, 2018. (Photo from Office of the Chief PNP)

Chief Supt. Roberto Fajardo, PNP-HPG director, said he did not ask the amount of the donated vehicles, but the high-class G 310 R motorcycles supposedly cost P12.5 million for around P250,000 each, based from the cost of each vehicle as shown in the website of BMW motorcycles.

Fajardo said this is the only time that the PNP-HPG has received such high-class motorcycles as donation.

“First time in the sense na BMW ito. Kasi siguro mga 50 years ago pa ‘yung last time na nagkaroon ng BMW ang PNP. We are very thankful for the SMC through Ramon S. Ang for his generosity,” he told reporters shortly before the turn-over of the vehicles to his unit on Friday.

According to Fajardo, the motorcycles will be a “big boost” in the operations of their patrolling units along Edsa, where the vehicles will be used by the highway patrollers for the meantime.

He also said the donation will greatly help in the road safety and security along Edsa, as he also lamented that the PNP-HPG has been short of motorcycles needed in the unit.

He said the unit has also coordinated with the San Miguel Corporation and with BMW regarding the maintenance of the motorcycles. /jpv