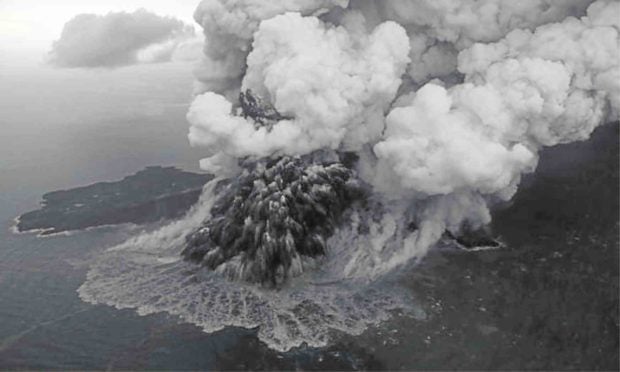 NATURE’S WRATH An aerial shot taken on Dec. 23 shows Anak Krakatau as it erupts in Java, Indonesia, triggering a landslide on the volcano and a deadly tsunami. AP

CARITA, INDONESIA—Indonesia on Thursday raised the danger alert level for an erupting volcano that sparked a killer tsunami at the weekend, after previously warning that fresh activity at the crater threatened to trigger another deadly wave.

Authorities also widened a no-go zone around rumbling Anak Krakatau, or child of Krakatau, to 5 kilometers, up from a previous 2 km, and warned shell-shocked residents to stay away from the coast, after more than 400 were killed by Saturday night’s killer wave.

Plumes of ash burst into the sky as pyroclastic flows, hot gas and other volcanic material flowed down the crater, threatening anyone too close to the volcano and raising the risk of rough seas for boats in the vicinity.

Authorities raised the crater’s status to high alert, the second-highest warning on the country’s four-point danger scale, while aviation officials ordered flights to be redirected away from the area.

“We’ve raised the status of (the volcano) since this morning because there’s been a change in the eruption pattern,” Kus Hendratno, a senior official at the Krakatau observatory, told Agence France-Presse (AFP) on Thursday.

‘Just pray for us’

The new flows posed no immediate danger to the area’s towns as the volcano sits in the middle of the Sunda Strait between Java and Sumatra islands.

But the status change sparked new fears with many residents already scared and refusing to return to their communities over fears of another tsunami.

“This worries me,” said Ugi Sugiarti, a cook at the Augusta Hotel in hard-hit Carita. “I’ve already left.”

Sukma, a security guard at the shattered Mutiara Carita Cottages, added: “Just please pray for us and that everything will be okay.”

A section of the crater which emerged at the site of the Krakatau (Krakatoa) volcano, whose massive 1883 eruption killed at least 36,000 people, collapsed after an eruption and slid into the ocean, triggering Saturday night’s killer wave.

About 22,000 people have been evacuated and are living in shelters.

On Wednesday evening, the disaster agency said that wind was blowing “ash and sand” from the volcano to the nearby towns of Cilegon and Serang on Java, and advised residents to wear masks and glasses if they had to venture outdoors.

Torrential rains have sparked flooding in some areas, hampering the relief effort and heaping more misery on the stricken region, as thousands cram emergency shelters.

Medical workers have warned that clean water and medicine supplies were running low, stoking fears of a public health crisis.

Indonesia, a vast Southeast Asian archipelago, is one of the most disaster-hit nations on Earth due to its position straddling the so-called Pacific Ring of Fire, where tectonic plates collide.

The tsunami was Indonesia’s third major natural disaster in six months, following a series of powerful earthquakes on the island of Lombok in July and August and a quake-tsunami in September that killed around 2,200 people in Palu on Sulawesi island, with thousands more missing and presumed dead. —AFP

Read Next
AFP: CPP’s anniversary ‘miserable’
EDITORS' PICK
IATF to LGUs: Issue ordinances vs attacks on frontliners, COVID-19 patients
Quick chat with Nicole Andersson: ‘You really don’t need much to be happy’
Robredo spox thanks Duterte for defending VP’s efforts vs COVID-19
Diokno to Duterte: OK to make fun of buck tooth, but focus on people’s needs first
Nograles: Cabinet members to donate 75% of monthly salary to aid COVID-19 fight
10 Filipinos positive for COVID-19 in UK, 7 in Ireland — envoy
MOST READ
Coronavirus hotbed Rizal to shut borders on April 6
Gov’t mulling quarantine period extension of 15-20 more days
Sotto on Isko Moreno’s call: We do our job without the media following our every move
Robredo spox thanks Duterte for defending VP’s efforts vs COVID-19
Don't miss out on the latest news and information.