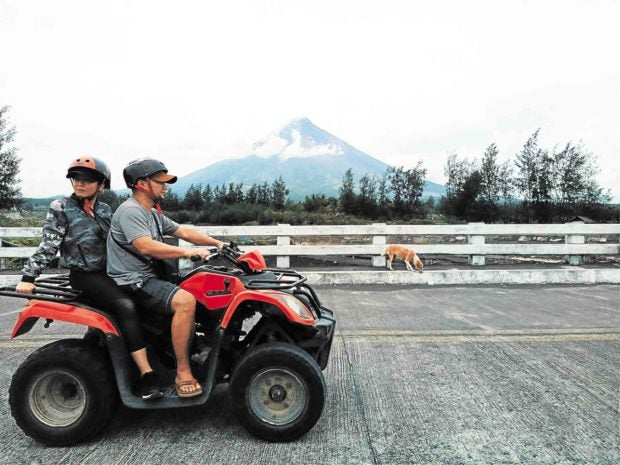 The Philippine Institute of Volcanology and Seismology (Phivolcs) said the phreatic eruptions were observed at 8:17 a.m. and 8:25 a.m. Thursday, a month after Mayon spewed ash following decreased activity in March.

Ed Laguerta, resident volcanologist at Mayon Volcano Observatory, said the eruption emanated from a shallow portion of the volcano, with a depth of less than a kilometer, because of its “mild” characteristics.

“[The ash plume] was not too high and [the eruption] was not too strong … Although [Mayon] also emitted light gray ash, the eruption still originated from a shallow portion of the volcano,” Laguerta said.

He said a faint glimmer could be observed at the volcano’s summit at night.

“That means that it is hot. Rocks are not good conductors of heat. If they escape from volcano, you will see that they are still smoking because of the rain that we have been experiencing lately,” he told the Inquirer.

Despite the latest eruptions, Phivolcs said Alert Level 2 (moderate level of unrest), which had been up since March, would remain over the volcano.

Solidum, in a telephone interview, said the phreatic explosions were triggered by steam pressure that developed underneath the volcano’s vent.

He said when steam mixes with lava, it produces pressure that would result in phreatic eruption.

Solidum said Phivolcs instruments observed a significant bulging around the midsection of the volcano’s edifice.

He also reiterated Phivolcs’ warning to the public to keep out of the volcano’s 6-kilometer permanent danger zone.

In January, Phivolcs raised the alert status over Mayon to 4 (imminent hazardous eruption) after it showed signs of heightened unrest.

Thousands of residents in towns and cities surrounding the volcano were evacuated after Phivolcs warned of the possibility of a hazardous eruption.

In March, Phivolcs lowered the alert level to 2 when the volcano showed decreased activity. —REPORTS FROM REY ANTHONY OSTRIA AND MAR ARGUELLES