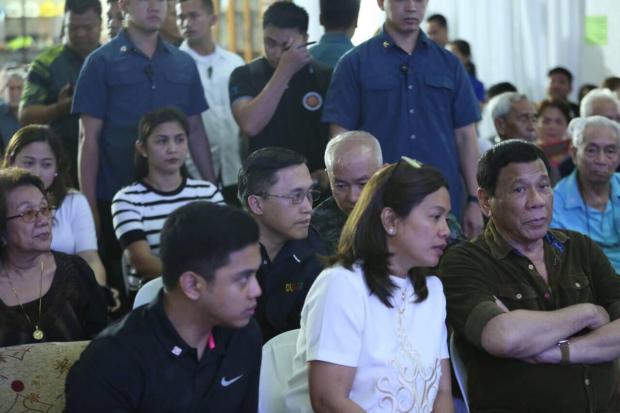 President Rodrigo Duterte (right) chats with Gertie Duran-Batocabe, widow of Ako Bicol Rep. Rodel Batocabe. Beside Mrs. Batocabe is her oldest son Justin. The President attended the wake of the solon, one of his allies on Wednesday, Dec. 26, 2018. (Photo by CHRISTOPHER GO)

MANILA, Philippines — President Rodrigo Duterte has ordered the police and the military to intensify checkpoints after the killing of his ally, Ako Bicol Rep. Rodel Batocabe.

Duterte ordered law enforcers to kill those who would refuse to submit themselves to inspection at checkpoints.

“If you carry a gun and you passed by a checkpoint and you refuse to stop because you are with the governor or mayor, my order to the police and to the military, son of a bitch, kill them. Let’s try,” the President told reporters in an ambush interview in Daraga, Albay on Wednesday night after he visited the wake of Batocabe.

“Even if you’re a governor or a mayor, if there is a check point, those who refused to stop and fight with you, my order is shoot them. Wala na tayong arte human rights, human rights [Let’s not talk about human rights],” he added. “I am placing the entire Armed Forces assigned here and the police to maintain law and order.”

During his visit to Batocabe’s wake, Duterte said the family of the slain lawmaker asked for justice.

The President said he assured the family that the government would not “sit on our ass and allow these things to happen.”

“I just called the chairman of Comelec and recommend to him to place Daraga under Comelec control,” he said.

He was referring to Sheriff M. Abas, chief of the Commission on Elections.

The President vowed to ensure that the elections in Daraga would be peaceful, despite the killing of Batocabe, who was running as town mayor there.

He also lamented the “ugly face of politics,” with some candidates killing their opponents. /atm