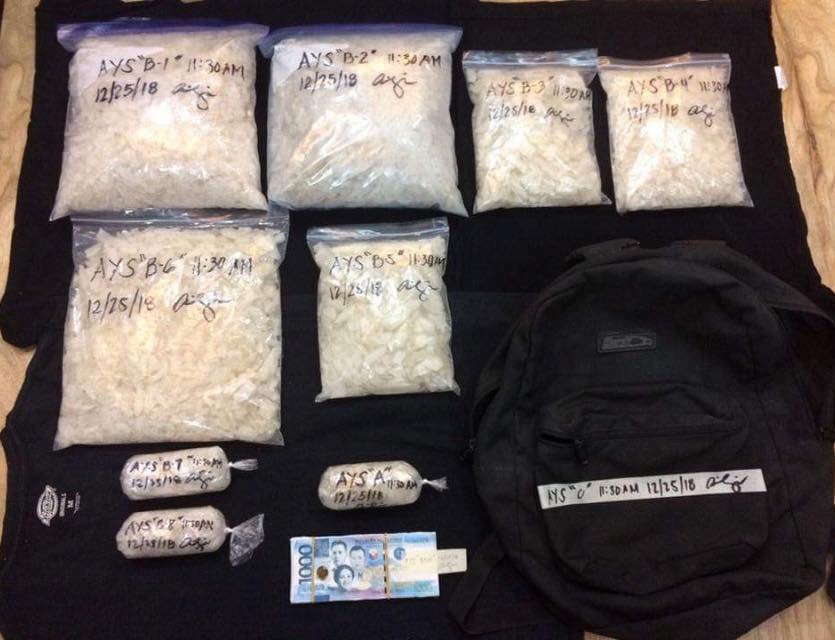 At least 6.8 kilos of suspected shabu which has an estimated value of P46 million were confiscated from a 24-year-old suspected drug courier in Barangay Basak San Nicolas, Cebu City. Photo by Nestle Semilla

The biggest haul of P40.8 million worth of shabu in several large packs came from Reji Abesia, 24, following a buy-bust operation inside his rented house in Sitio Cogon, Barangay Pardo.

Abesia rented a house in Barangay Basak Pardo to escape detection since he was not known in the area, Bancoleta said.

“What he did not know was that we had been monitoring him for some time now), ” Bancoleta said in Cebuano.

When they saw that he had rented a house in Basak Pardo, Bancoleta said they just waited for the right time before pushing through with their operation.

Abesia, speaking to Cebu Daily News, insisted he was just a courier for a person named “Lebron” whom he had not met in person and only communicated by phone.

Abesia claimed he got a weekly salary of only 2,500 from his “boss” and had so far disposed of about 50 kilos of shabu.

Arrested were Michael Ceniza, 39, and his live-in partner Remelyn Fernandez, 33, both residents of Pasil.

Police only targeted Ceniza in the buy-bust operation and he had just handed to an agent a pack of shabu for P108,000 when his woman companion was found carrying a bigger amount of the prohibited drug.

The two arrested males were temporarily put to jail at the San Nicolas Police Precinct while Fernandez was detained at the jail facility at the CCPO headquarters./lb