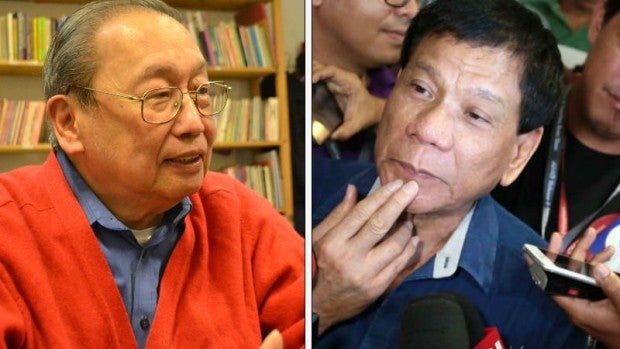 Update (This version rectifies some quotes from Jose Maria Sison.)

This was how Communist Party of the Philippines (CPP) founder Joma Sison described President Rodrigo Duterte a day after the Christmas celebration.

Sison, a known critic of the administration, said on Wednesday that the country now has a maniac President after Duterte, whom he called a “mediocre student,” engaged in alleged widespread killings.

“If a mediocre student like Duterte, and if someone who is only good for being mayor and even bad as he was, engage in extrajudicial killings, now you have a maniac. A murder maniac in power trying to put on a national scale his blood-thirsty kind of character,” Sison said in an interview with ABS CBN News Channel.

Sison further slammed the current administration as it described it as the “worst manifestation of the oligarchy” compared to the term of the late dictator Ferdinand Marcos.

“This is the worst manifestation of the oligarchy, much worse than the Marcos phenomenon,” Sison said.

“At least Marcos was more intelligent in pushing his crooked objectives since he was able to conceal his greed for power and wealth,” he added.

Sison made the remark when asked if the CPP would heighten its revolution to oust Duterte as part of its goal for its 50th anniversary.

Sison said that the rally of the CPP may not be visible in the urban area, but it is already establishing a “red political power” in the countryside.

It is only a matter of time when the CPP would advance its revolutionary movement in the city, Sison said.

He added that the ruling system is having a fast rate of decomposition and deterioration under Duterte’s watch.

“As someone who is not fit even by the bourgeoisie standards, he managed to sneak into power and this shows very much degradation and the state of decomposition of the entire ruling system,” he said. /je