On Christmas Eve, Trump questions child about belief in Santa 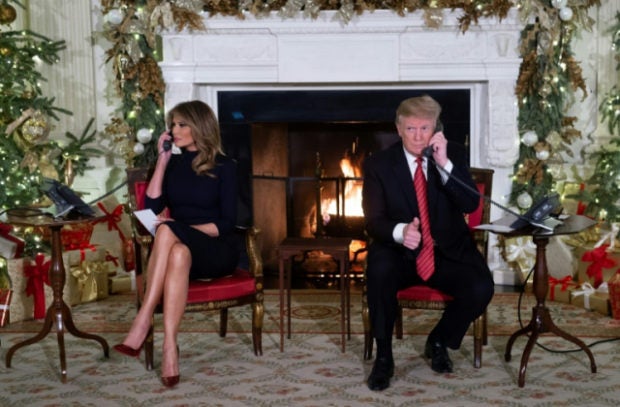 Fielding a phone call from a seven-year-old on Monday, U.S. President Donald Trump put himself on Santa Claus’s naughty list by raising doubts about his existence.

The call to American defense agency NORAD, which “tracks” Santa’s movements around the world, was one of several answered by Trump and his wife Melania as part of a Christmas Eve tradition.

It began innocuously enough: “Hello, is this Coleman? Merry Christmas. How are you? How old are you?”

But Trump then ventured into dangerous waters, asking: “Are you still a believer in Santa Claus? ‘Cuz at seven it’s marginal, right?”

The president’s question was not well-received on social media.

“Belief in Santa should be preserved as long as possible. It’s the, or close to the, beginning of the end of innocence. For Mr. Trump to be responsible for that is sad…but not surprising,” a Twitter user named Walt Corey wrote.

Derryl Murphy tweeted”  “Trump doesn’t know how to say anything appropriate, to anyone,” while Sarah Walker wrote on Twitter, “This further proves that he is the grinch.”

It was not immediately clear whether Coleman decided to forego leaving cookies and milk out for Santa this year. MKH

LOOK: Trump draws laughs for boarding plane with tissue stuck to his shoe