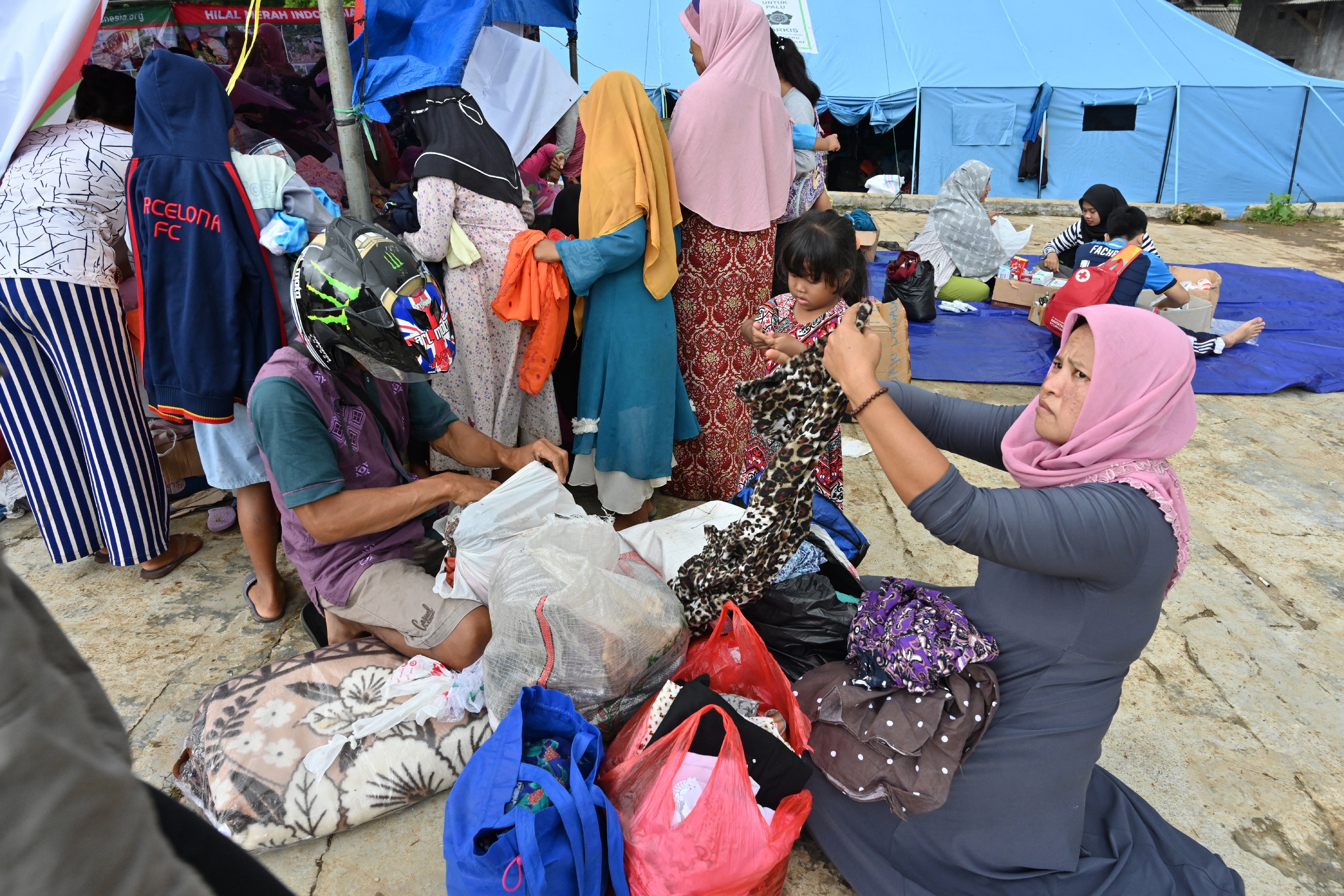 Tsunami survivors collect donated clothing at a help centre in Citangkil village in Sumur, Pandeglang, Banten province on December 25, 2018, three days after a tsunami – caused by activity at a volcano known as the “child” of Krakatoa – hit the west coast of Indonesia’s Java island. – Dozens of filled body bags were hauled away from buildings flattened by Indonesia’s volcano-triggered tsunami on December 24, as the death toll climbed to 373 and search teams pushed on with the grim hunt for corpses. (Photo by Adek BERRY / AFP)

Fears about a public health crisis come as the death toll from Saturday’s volcano-triggered disaster rose to nearly 400 with thousands more displaced from flattened homes.

“A lot of the children are sick with fevers, headaches and they haven’t had enough water,” said Rizal Alimin, a doctor working for NGO Aksi Cepat Tanggap, at a local school that was turned into a temporary shelter.

“We have less medicine than usual…It’s not healthy here for evacuees. There isn’t enough clean water. They need food and people are sleeping on the floor.”

The powerful tsunami struck at night and without warning, sweeping over popular beaches on southern Sumatra and western Java and inundated tourist hotels and coastal settlements.

Experts have warned that more deadly waves could slam the stricken region.

Many of the more than 5,000 evacuees are too afraid to return home, fearing another disaster.

“I’ve been here three days,” said Neng Sumarni, 40, who was sleeping with her three children and husband on the school’s floor with some three dozen others.

“I’m scared because my home is right near the beach.”

“Today we’re focusing on helping the evacuees in shelters by setting up public kitchens and distributing logistics and more tents in suitable places,” he told AFP on Tuesday.

“(People) still don’t have access to running water…There are many evacuees who fled to higher ground and we still can’t reach them.”

Aid was flowing in mainly by road while two government boats were on their way to several islands near the Sumatran coast to help dozens of marooned residents.

Officials have said the evidence suggested that an eruption at the rumbling Anak Krakatoa volcano in the Sunda Strait — between Java and Sumatra — caused a section of the crater to collapse and slide into the ocean, triggering the tsunami.

Unlike those caused by earthquakes, which usually trigger alert systems, volcano-triggered tsunamis give authorities very little time to warn residents of the impending threat.

Indonesia’s disaster agency initially said there was no tsunami threat at all, even as the killer wave crashed ashore.
It was later forced to issue a correction and an apology as it pointed to a lack of early warning systems for the high death toll.

Disaster agency spokesman Sutopo Purwo Nugroho said on Monday: “The lack of a tsunami early warning system caused a lot of victims because people did not have the time to evacuate.”

Meanwhile, rescue teams were using their bare hands, diggers and other heavy equipment to haul debris from the stricken area and hunt for corpses, as hopes of finding more survivors dwindle.

The tsunami was Indonesia’s third major natural disaster in six months, following a series of powerful earthquakes on the island of Lombok in July and August and a quake-tsunami in September that killed around 2,200 people in Palu on Sulawesi island, with thousands more missing and presumed dead.

It also came less than a week before the 14th anniversary of the 2004 Boxing Day tsunami, one of the deadliest disasters in history that killed some 220,000 people in countries around the Indian Ocean, including some 168,000 Indonesians.

The vast archipelago nation is one of the most disaster-hit nations on Earth due to its position straddling the so-called Pacific Ring of Fire, where tectonic plates collide.

Read Next
CPP nothing to be proud of after 50 years – AFP exec
EDITORS' PICK
Leveling up your ‘lutong bahay’ with the kitchen companion you never knew you needed
WATCH: Mga eskwelahan na ginawang quarantine facility, binigyan ng dalawang linggo para linisin
Crisis seen in absence of jeepneys in Metro Manila
Cherry Mobile teams up with Cloud Panda PH, launches online store
Gov’t urged to shift public transport system to service contracting
MMDA: Commuters to blame for chaos
MOST READ
MMDA to sue, slap P1,000 fine on bike group
MMDA: Commuters to blame for chaos
PH walks back, suspends VFA termination ‘upon the President’s instruction’
Calida ‘just the lawyer, not the client’ and must ‘never lose his cool’ – Macalintal
Don't miss out on the latest news and information.