No warning meant no escape from Indonesia tsunami 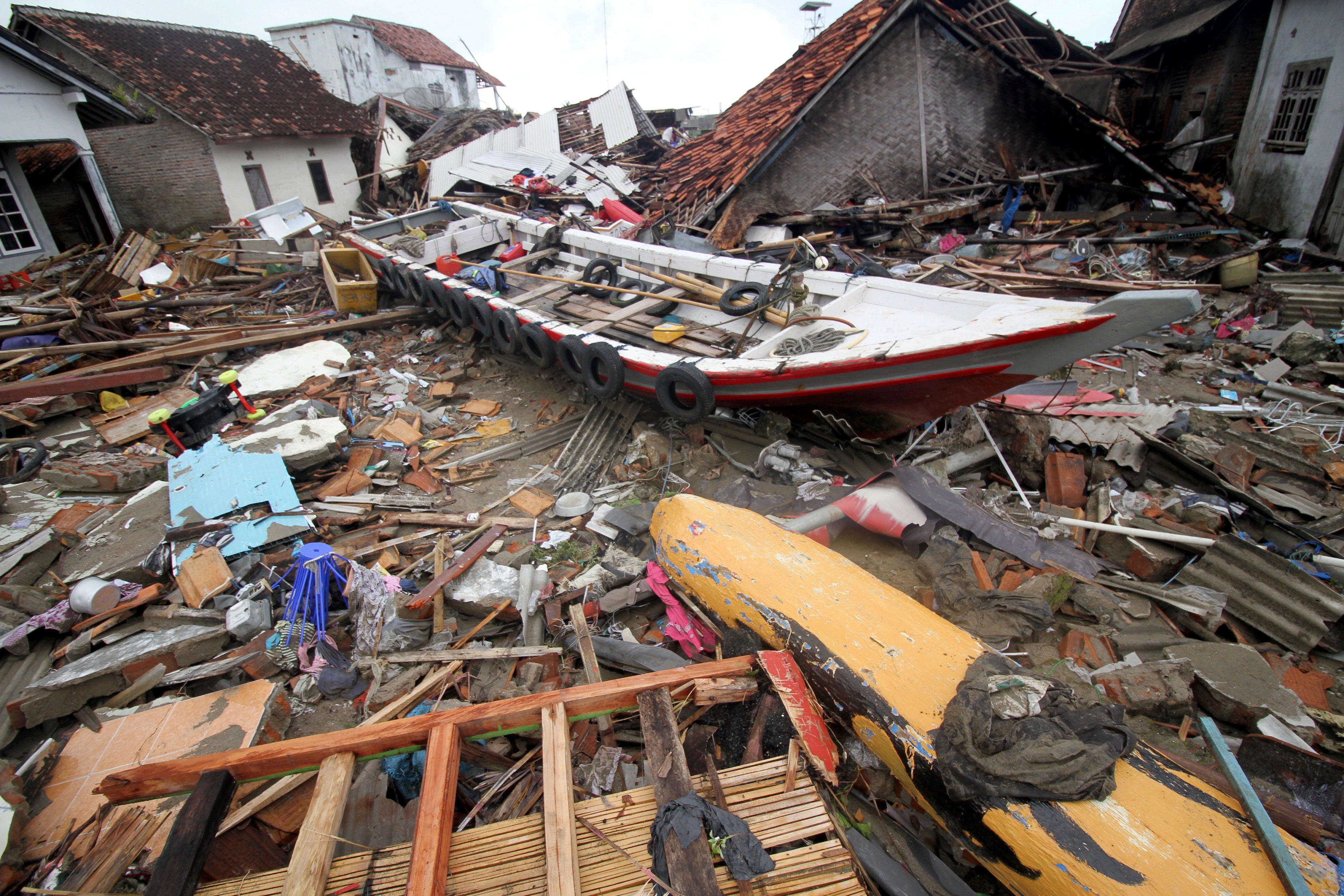 This general view shows scattered debris around destroyed or damaged homes in Sumur on Java island on December 24, 2018, two days after a tsunami – caused by activity at a volcano known as the “child” of Krakatoa – hit the west coast of Indonesia’s Java island. – The death toll from the volcano-triggered tsunami in Indonesia has risen to 281, with more than 1,000 people injured, the national disaster agency said on December 24, as the desperate search for survivors ramped up. (Photo by Demy Sanjaya / AFP)

JAKARTA — An unpredictable chain of events and an inadequate early warning system combined to deadly effect with the tsunami that slammed into coastal areas of Indonesia killing nearly 300 people, disaster officials and experts said Monday.

The killer wave struck tourist beaches and low-lying settlements on both sides of the Sunda Strait with devastating force on Saturday night, catching both residents and disaster monitors totally unawares.

In a series of tweets later deleted with a stricken apology, the national disaster agency had stated there was “no tsunami threat” even as the wave crashed over parts of southern Sumatra and the western tip of Java.

“The lack of an early warning system is why the tsunami was not detected,” acknowledged disaster agency spokesman Sutopo Purwo Nugroho.

“Signs that a tsunami was coming weren’t detected and so people did not have time to evacuate,” he added.

Indonesia is one of the most disaster-prone nations on Earth due to its position straddling the so-called Pacific Ring of Fire, where tectonic plates collide.

A quake-tsunami that struck Palu on Sulawesi island in September killed around 2,200 people, with thousands more missing and presumed dead.

Tide-monitoring stations and data-modelling are the main tools Indonesia monitoring agencies use to predict tsunamis — usually in the wake of an earthquake.

But even if all the country’s stations are working, the network is recognised to be limited and in any case gives people little time to flee as they only detect waves once they are close to shore.

Efforts to improve systems have been beset by problems, from a failure to properly maintain new equipment to bureaucratic bickering.

Experts say Saturday’s disaster was most likely caused by a moderate eruption of the Anak Krakatoa volcano in the Sunda Strait that triggered either a large and very fast moving flow of molten rock into the sea or a sudden and massive submarine landslide.

In either case, large volumes of water would have been displaced, resulting in a tsunami.

No time to run

“Such triggers would not have been detected by Indonesia’s tsunami early warning system because that is geared-up to detect earthquake-triggered tsunamis,” said Richard Teeuw, a disaster risk reduction expert at the University of Portsmouth in England.

“The night-time occurrence of the tsunami would have added to the chaos, with little chance of seeing the incoming tsunami wave and running to safety,” Teeuw said.

And the fact that Anak Krakatoa had been displaying significant activity for months, meant that Saturday’s minor eruption would have sparked no particular cause for alarm.

After the catastrophic Indian Ocean quake-tsunami in 2004, Indonesia deployed a number of early-warning marine buoys to detect tsunamis, but Nugroho said they had been out of action for the past six years.

“Vandalism, limited budgets and technical issues are the reasons why we currently don’t have tsunami buoys,” he said. “We must rebuild them to strengthen Indonesia’s Tsunami Early Warning System.”

Such buoys are normally deployed along underwater tectonic plate boundaries — the focus again on detecting earthquake-generated tsunamis rather than those triggered by volcanic activity.

David Rothery, a professor of planetary geosciences at Britain’s Open University, noted that a blanket deployment of buoys would still have a limited warning impact if the tsunami was generated close to the shore.

“Even if there had been such a buoy right next to Anak Krakatau, this is so close to the affected shorelines that warning time would have been minimal given the high speeds at which tsunami waves travel,” Rothery said.