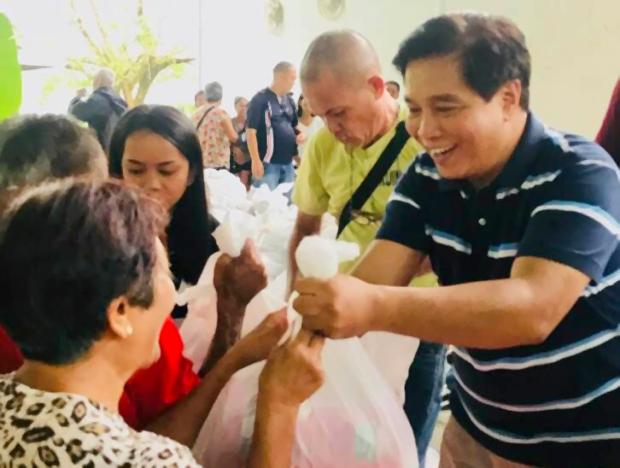 Ako Bicol Rep. Rodel Batocabe leads a gift-giving event on Friday, Dec. 21, 2018, a day before he was shot at a similar event in Daraga, his hometown in Albay. (Photo from his Facebook account).

LEGAZPI CITY — The bounty for the killers of Ako Bicol Rep. Rodel Batocabe was raised to P30 million on Sunday and was likely to breach the P50-million mark in a few days as officials and relatives shared the belief that politics was behind the murder.

Batocabe’s colleague in Ako Bicol, Rep. Alfredo Garbin, said the party-list group had already pledged P15 million and members of the House of Representatives were expected to pitch in up to P50,000 each.

The reward money could exceed P50 million, Garbin said at a press conference in this city on Sunday.

Speaker Gloria Macapagal-Arroyo said at least 150 congressmen had pledged to contribute to the bounty.

The regional police would provide hotline numbers for people to call and disclose information on the killers of Batocabe and his police escort, SPO1 Orlando Diaz.

The two had just wrapped up a gift-giving event for senior citizens and persons with disabilities in Daraga town when they were gunned down on Saturday afternoon.

Seven people were wounded in the attack, police said.

Garbin said his group was also seeking the removal of Supt. Charlotte Dodson Peñalosa, regional chief of a PNP unit in charge of providing security to VIPs.

Peñalosa pulled out Batocabe’s police escorts days before the murder, the lawmaker said. “Her incompetence and negligence resulted in loss of life.”

Batocabe was running for mayor of Daraga in next year’s local elections.

Duran said Batocabe was given a bulletproof vest but did not wear it.

But Batocabe’s son Justin said the threats were “nothing outside of the ordinary during the election season.”

He said the family wanted to “continue whatever my father started because we cannot allow him to die twice.”

Several officials have already pointed to politics as motive for the murder.

An initial probe by National Bureau of Investigation agents “suggests [that] the attack was politically motivated,” the Department of Justice said in a statement in Manila on Sunday.

Justice Secretary Menardo Guevarra has ordered the NBI to coordinate with the PNP in solving the case.

Benitez said those who were behind Batocabe’s murder were “afraid of change” and “did not want to lose.”

Arroyo and other House leaders flew to Albay province on Sunday to condole with Batocabe’s family and assure them of help in bringing his killers to justice.

“Life has become so cheap,” she said after visiting the wake. “That should not be so.”

Justin said the bounty offer would also be in remembrance of Diaz, the lawmaker’s slain aide, who had become close to the family.

The Commission on Human Rights (CHR) office in Bicol has also started investigating the case “in aid of making the perpetrators accountable.”

Jacqueline Ann de Guia, CHR spokesperson, on Sunday said Batocabe’s killing should push the government to be more vigilant in the coming elections.

Batocabe’s remains were brought to Dr. Ricardo A. Arcilla Hall on Bicol University’s Daraga campus and would stay there until Dec. 31.

His family has yet to set a date for the funeral. —With reports from Dona Z. Pazzibugan, Jeanette I. Andrade, Marlon Ramos and Vince Nonato