Duterte: I will abolish Road Board 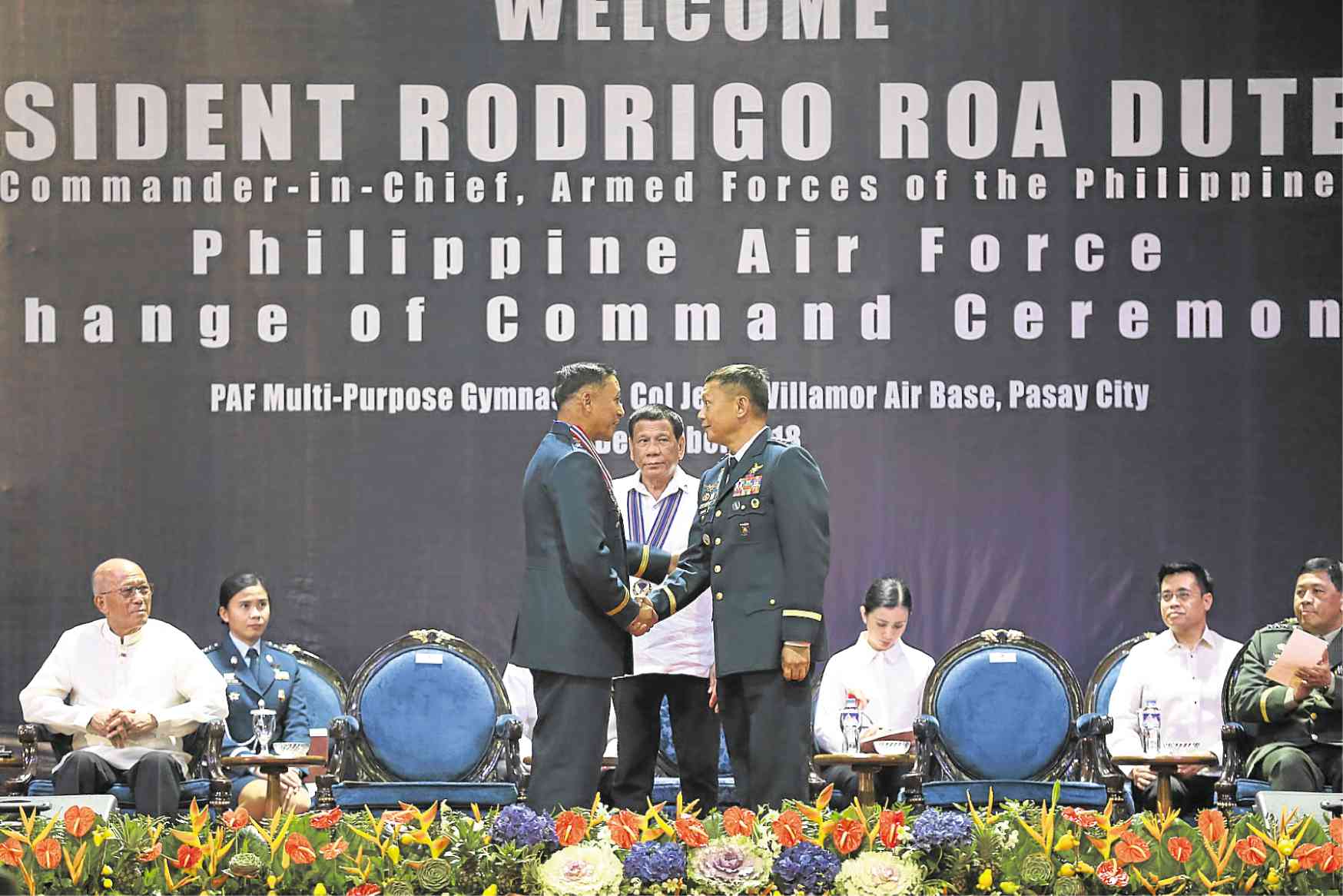 CHANGE OF COMMAND President Duterte witnesses the turnover of leadership of the Philippine Air Force from outgoing Lt. Gen. Galileo Gerard Kintanar (left) to Lt. Gen. Rozzano Briguez during a program at Villamor Air Base in Pasay City on Friday. —JOAN BONDOC

President Rodrigo Duterte on Friday night took the side of the Senate in pushing for the abolition of the Road Board, saying revenue from the road user’s tax had become a milking cow of corrupt officials.

During the change of command ceremony of the Philippine Air Force at Villamor Air Base, the President maintained that he had always questioned the existence of the Road Board, calling it a mere “depository of money for corruption.”

“This is in the matter of abolishing the road tax.”

He added that he believed the Senate “decided the right thing” in pushing for the abolition of the board.

The Senate and the House of Representatives approved the scrapping of the board, but the lower chamber later moved to rescind the bill.

Senate President Vicente Sotto III earlier said the chamber would transmit its resolution approving the Road Board’s abolition to the President even without the signature of Speaker Gloria Macapagal-Arroyo.

Malacañang said the President might sign the bill even without Arroyo’s signature, “if it’s only ministerial on the part of the House Speaker.”

“Ever since, I really questioned the existence of this office. It’s nothing but a depository of money for corruption. It has no other purpose. And I agree with the others and the senators that it is time to abolish it and return that function to the Department of Public Works and Highways,” the President said.

In Porac town, Pampanga province, Arroyo said on Friday that she would have to “consult” the President on whether the Road Board should be abolished.

The Road Board has been at the center of a controversy in Congress after ousted Speaker Pantaleon Alvarez said that lawmakers had been conspiring with board officials to get kickbacks from handpicked contractors.

Alvarez said that this was the reason the House stepped up its attacks on Budget Secretary Benjamin Diokno.

Diokno claimed Arroyo and her allies wanted his head after he blocked their requests to release part of the P45-billion revenue from the road user’s tax, suspecting that the lawmakers would use the funds for the election campaign in 2019.

In his speech, the President recognized the “little bit of a ruckus there in the Congress” on the abolition of the road user’s tax.

The President said he was against the road user’s tax as it had been abused by corrupt officials.

“Early on, I told them that I don’t want it. But you know, politics and the expediency of everything, it’s still there,” the President said.

House Majority Leader Rolando Andaya Jr. earlier claimed that the President had agreed to keep the Road Board, contrary to the assertions of presidential spokesperson Salvador Panelo and Diokno.

Andaya said he and Arroyo met with the President over dinner before the House rescinded the bill.

Diokno’s insistence that the Road Board be dissolved negated the legislative agenda of the President’s economic team, Andaya said on Friday.

According to him, Finance Secretary Carlos Dominguez III had sent a letter to the Speaker on Sept. 21 asking for House assistance in shepherding the administration’s five major tax reform measures.

In his letter, a copy of which was sent to the media by Andaya, Dominguez listed increasing the road user’s tax as among the government’s priority tax bills.

No mention of abolition

“On Item No. 3, the stand of the DOF (Department of Finance) on the road user’s tax is clear: restructure and increase the (MVUC). The letter does not mention the Road Board abolition,” Andaya said in a statement.

“Diokno, on the other hand, is all over town telling our people that the President wanted the abolition of the Road Board. We, in Congress, believed that Dominguez is speaking for the economic managers when he spelled out the government’s economic agenda,” the House leader said.

The President confirmed that he met with Arroyo, one of his allies, and said there was a misunderstanding on the part of Andaya.

The President denied Andaya’s claim that he had agreed to keep the Road Board.

“I had a talk with Arroyo and apparently, there was a misunderstanding. Because all along I really wanted to abolish the road tax and Andaya says now that I was one of those who said it should be maintained. No. They made a mistake there,” the President said.

He added that his feelings about the dismantling of the Road Board were at “its strongest” since it served no purpose other than corruption.

“And I say now that it’s about time that they dismantle it, because if not … And if I side, which I am on the side of the Senate, it would create another constitutional issue and maybe crisis,” the President warned.

He added: “I hope not. I hate to say it but please … If it’s good for the people … we should just go ahead and abolish it.”  —With reports from Marlon Ramos and Leila B. Salaverria