‘I thought it was an earthquake’: Giant sinkhole opens on busy Indonesia road 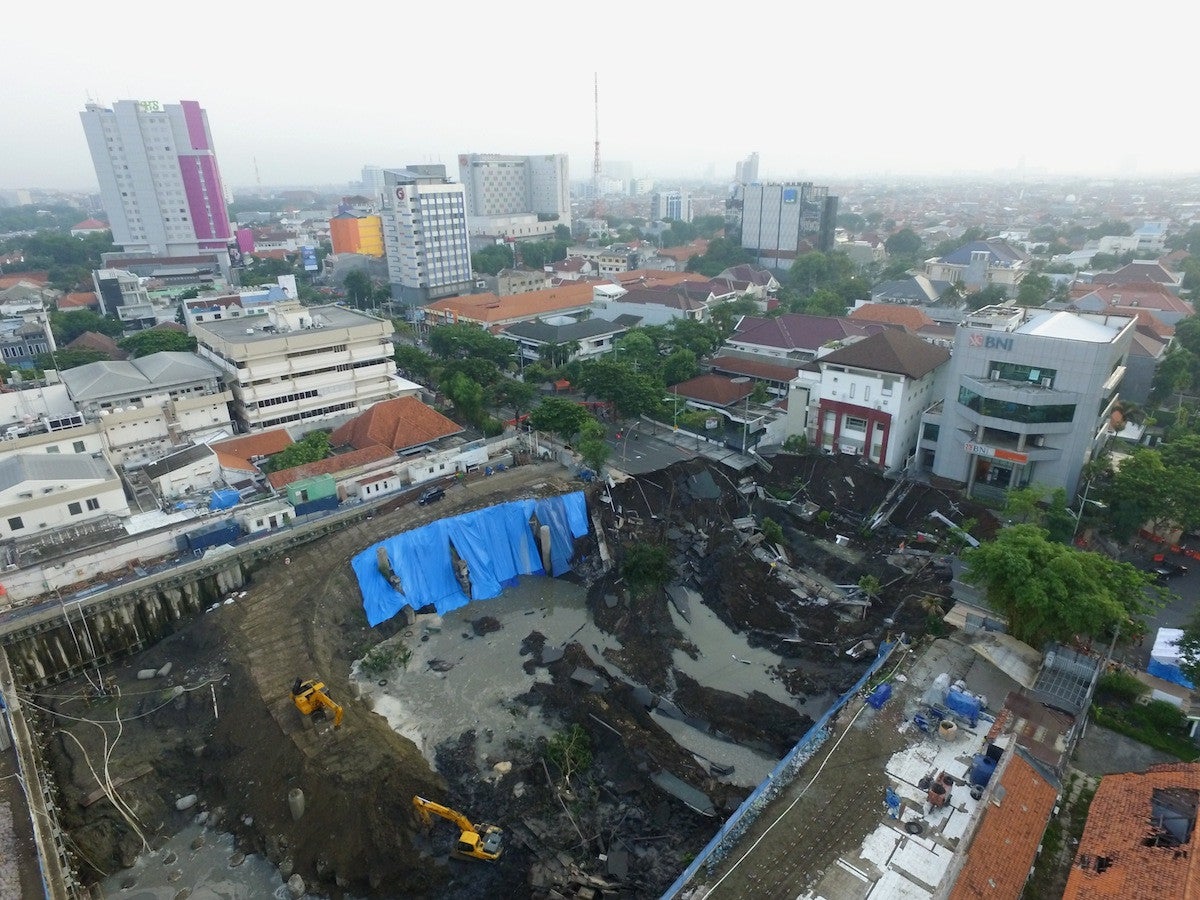 An aerial view of the sinkhole on Jl. Raya Gubeng in Surabaya, East Java, on Dec. 19. THE JAKARTA POST

SURABAYA — A giant sinkhole has appeared in the middle of a busy road in Surabaya, East Java, on Tuesday night, swallowing part of the four-lane Jl. Raya Gubeng and measuring roughly 30 meters wide and 15 meters deep.

The police have cordoned off the area and arranged a traffic detour.

Thousands of vehicles pass the road every day. It usually takes five minutes to travel the entire length of Jl. Gubeng, but now takes roughly one hour.

Rudianto, 47, a resident of Kertajaya subdistrict who was about to drive through the location said he saw trees and lampposts rocking on the roadside just before the incident.

“I thought it was an earthquake. I backed the car and went against the flow. People ran around asking for help, went out of their cars leaving their vehicle,” Rudianto said.

“The retaining wall was not able to withstand the load, especially during the rainy season,” he said in a statement, adding that there was no connection between this incident and two active earthquake faults in Surabaya and Waru.

Surabaya Deputy Mayor Wisnu Sakti Buana said the sinkhole was related to the construction of a parking basement at Siloam Hospital.

“This is related to the project on the side of the road. The Siloam Hospital project. They were supposed to build a foundation first, but they didn’t,” Buana said as quoted by tribunnews.com.

Surabaya Development Planning Agency head Eri Cahyadi concurred, saying the incident was purely caused by an error in the project.

“We are still waiting for an expert [opinion] regarding the cause of this incident. We have asked people for information, they are all related to the project,” said East Java Police chief Insp. Gen. Lucky Hermawan.

Lucky said 29 people worked on the project every day. He said an expert team had reminded the contractor that water was flowing underground.

“We’re still looking into whether the contractor has followed up on the warning or not,” he said.

He said there had been no reports of any injuries in the incident. However, the search and rescue team and Surabaya Fire Service are still conducting an investigating and searching for possible victims.

Vice president commissioner Romeo Fernandez Lledo of PT Siloam International Hospitals said on Wednesday,  “Let me check who is in charge of the incident.”