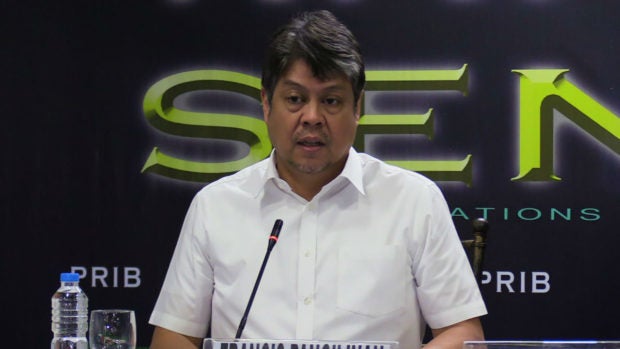 MANILA, Philippines — The rice tariffication bill should not be used to alarm the Filipino consuming public about availability and affordability of rice, Senator Francis Pangilinan said Wednesday.

Pangilinan made this remark in light of Agriculture Secretary Emmanuel Piñol’s statement that the National Food Authority (NFA) would stop selling cheap rice once the bill is passed into law.

“The rice tariffication bill, when it becomes law, should not be used as an excuse to alarm the consuming public about available and affordable rice,” Pangilinan said in statement.

“Parang alam na niyang may paparating na bagyo, tinatantya na niya ang mga mamamatay [It’s like he knew that there is a storm coming and he is already predicting how many would be the casualty],” he added.

Piñol earlier said in a press conference that the rice variant being sold by the NFA at P27 a kilo would have to be discontinued as the NFA will be forced to stop selling as a result of the expected liberalization of the rice industry.

He added that the NFA “cannot afford subsidized rice anymore.”

President Rodrigo Duterte is set to sign into the law the rice tariffication bill, which will liberalize the rice industry by removing the quota on rice imports.

Under the bill, NFA’s role will be limited to keeping the country’s buffer stock for emergency purposes and buying unmilled rice (palay) from local farmers.

Pangilinan said instead of instilling fear on the public, Piñol should act on his mandate to “make rice farmers more productive and competitive through cheaper farm inputs and lower rice wastage.”

He also urged the Agriculture secretary to be more vigilant and use his power and authority under the Price Act to ensure that affordable rice is available to the public.

“Under this law, he has the power to ensure no overpricing, hoarding, profiteering, delay of importation, and other forms of price manipulation happen with respect to our country’s staple,” Pangilinan explained.

The senator also advised Piñol to convince Duterte and his economic team to suspend the hike in fuel excise tax due to the Tax Reform Acceleration and Inclusion (TRAIN) law as it factors in the transport of rice and other food products.

Lastly, Pangilinan said that Piñol should ensure that there is sufficient land for agriculture products, especially rice. /jpv

Read Next
Singapore mounts ban of Goldman Sachs exec with 1MDB links
EDITORS' PICK
World-standard accounting: Unlocking your financial potential
Water remains our saving grace right now
Defend Your Health! Shop health essentials from home with Rose Pharmacy’s Online Sale
COVID-19 wards in 2 more hospitals reach full capacity
Navotas will be on lockdown from July 16 to 29 – Tiangco
Chatting with companions, answering calls on MRT 3 trains banned
MOST READ
‘I am not my father,’ says daughter of lawmaker who voted to deny ABS-CBN franchise
In slap on face of PH, China replies to Locsin on tribunal ruling: It’s invalid
Vilma Santos-Recto ‘prepared’ to face ‘consequences’ over ABS-CBN franchise vote
Did a meme get on Agot Isidro’s nerves? She’s asking ’24 Oras’ to fact-check it
Don't miss out on the latest news and information.